As more than 40 world leaders ascend to Jerusalem this week to commemorate the 75th anniversary of the liberation of Auschwitz, Israel should be careful not to assume that those who attend this largely ceremonial event are working to combat antisemitism, or even desire to be the country’s ally, The Jerusalem Post reports in its article At Auschwitz tribute, Israel should study tale of two monuments.

Lithuanians, Armenians, Poles and others are rewriting and distorting their roles in this tragic history. Take Armenia. In May 2016, the west Asian country erected a monument in its capital of Yerevan honoring Garegin Nzhdeh (1886-1955), a Nazi collaborator and commander of the Wehrmacht’s Armenian Legion. The unit fought in Crimea, the Caucasus and southern France as the Nazis rounded up Jews and resistance fighters and marched them to death camps. In 1945, Nzhdeh was sentenced to 25 years in prison by a Soviet court for his war crimes and collaboration with the Nazis.

Moreover, he was the founder of the racist Tseghakronism movement, designed to represent those who embody the “spiritual and biological essence of the classical Armenian,” whose obligation it is to rule the country. Its ideology is reminiscent of the Aryan supremacy espoused by Nzhdeh’s Nazi comrades.

Nzhdeh is considered a national hero in Armenia. A square and a subway station in Yerevan are named after him, and his legacy is taught to children in Armenian public schools. When the statue was erected in 2016, opposition fell on deaf ears. Holocaust scholar Efraim Zuroff called the move “outrageous... an unfortunate mistake, and an insult to the victims of the Nazis and all those who fought against the Nazis.” The monument was never taken down.

In fact, in Armenia, Nzhdeh’s legacy is shared with another glorified Armenian Nazi general and commander, Drastamat Kanayan, whose name adorns the government-founded “Drastamat Kanayan Institute of National Strategic Studies.” Armenia’s Ministry of Defense established a medal in his name to decorate military personnel and civilians who excel in military training.

The glorification of Nzhdeh should not be seen in isolation. There is abundant empirical evidence that Armenian society is systemically antisemitic. The Anti-Defamation League’s most recent survey on antisemitism in over 100 countries in June 2014 – conducted even before the statue was built – showed that the rate of support for antisemitic views in Armenia (58%) was the third-highest in all of Europe, and the highest in all of the countries in the former Soviet Union and Eastern Europe. Some 68% of Armenians believe that “Jews are more loyal to Israel than to [the countries they live in]” and 72% agree that “Jews have too much power in the business world,” according to that report. Moreover, a Pew Research Center study conducted soon after showed that 32% of Armenians would not accept Jews as fellow citizens.

Perhaps this high level of antisemitism comes due to the vestiges of ancient Eastern Orthodox church-based antisemitism. This past June, 60 students of the Armenian Church attacked two young Jews who were walking on Armenian Patriarchate Street in the Old City of Jerusalem, severely beating them.

Before the country’s independence in 1991, the Armenian Jewish community was comprised of more than 5,000 members. Today, that number is less than 100. 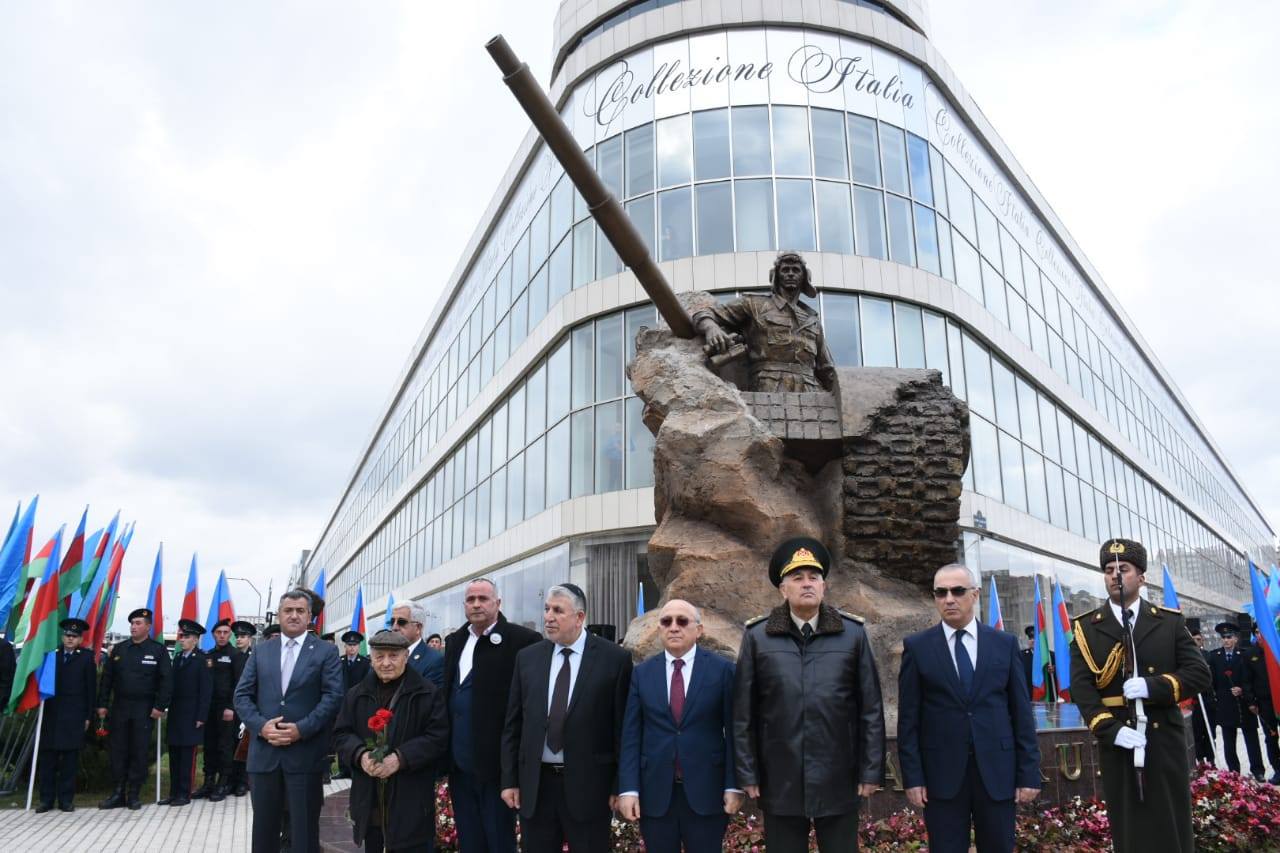 MEANWHILE, AZERBAIJAN, which likewise attained its independence in 1991 from the Soviet Union and today remains in a decades-long territorial conflict with Armenia, unveiled a statue in its capital of Baku last November in honor of the nation’s Jewish war hero Albert Agarunov (1969-1992). The contrast between the Agarunov monument and Armenia’s Nzhdeh monument could not be starker.

Agarunov attended Azerbaijani music school and later worked in oil production. When the Soviet Union collapsed in 1991, he fought for Azerbaijan against Armenia and its brutal military invasion in the Nagorno-Karabakh region. At the time, Agarunov told journalists covering the war: “This is my land. I don’t have another motherland. It’s natural for me to defend my home.”
In May 1992, he was killed by an Armenian sniper. Agarunov posthumously received the National Hero of Azerbaijan recognition, his country’s highest honor awarded for military service.
The legacy of Agarunov remains a powerful symbol of Jewish integration and pride in a nation whose population is more than 90% Muslim. During this time of rising antisemitism worldwide, Azerbaijan is a place where antisemitism is absent and where interfaith ties thrive, according to nearly all reports.

Any examination of this week’s Holocaust remembrance ceremonies in Jerusalem should not end with the Armenia-Azerbaijan contrast. Lithuania, which will also be present, represented by its speaker of Parliament, has pushed back against allegations of collaboration between the local population and the Nazis during the Holocaust, and is considering passing legislation similar to Poland’s, which would formally declare that the country and people did not collaborate in the murder of Jews during World War II.

It is estimated that 230,000 Jews were murdered by locals in Lithuania in just the first six months after Germany’s invasion in June 1941; there are more than 200 mass grave sites in Lithuania. Yet the legislation claims that because Lithuania was an occupied nation – first by the Soviet Union and then by Nazi Germany – it is not responsible for these murders.

The Germans no doubt perpetrated the Holocaust, but they continue to acknowledge, confront and apologize for their dark past. In contrast, Lithuanians, Armenians, Poles and others are rewriting and distorting their roles in this tragic history.

Monuments in honor of “Holocaust heroes” like the Nzhdeh memorial in Armenia reinforce the need to call out and counter the ongoing, disturbing attempts to whitewash the Holocaust across Europe and Asia.

This week, when photos of smiling leaders shaking hands make their way across the Internet to great fanfare, the Israeli people and their leaders would be well-served keeping in mind who their true friends really are.