The Master and Margarita

Famous song of Alla Pugacheva, “A Million Scarlet Roses” to the verses of Andrei Voznesensky, tells of the crazy and very beautiful act of a poor artist who spent all his property on flowers for his beloved in the hope of reciprocity. The song begins with the lines “Once upon a time there was one artist”. They say that he really lived in Tiflis, at the turn of the XIX-XX centuries. His name was Niko Pirosmani.

As often happens, contemporaries did not appreciate his talent. The painter interrupted by casual earnings and often went to bed hungry. He worked as a conductor, a shepherd, painted signs, opened a dairy shop together with another - all to no avail. Nico died in complete poverty. Only after death will the genius of Pirosmani gain worldwide recognition. 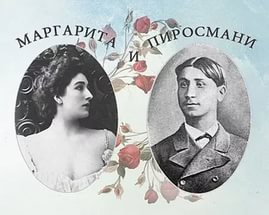 This story happened at the beginning of the last century. Margarita de Sevres, along with the Belle Vue miniature theater, arrived in the Caucasus. The Frenchwoman sang unpretentious songs and danced an exotic keycock - a dance that became the progenitor of jazz - in cafesanthans and duhans. In one of the cafes, Niko Pirosmani saw the actress and fell in love. But Mademoiselle did not appreciate the feelings of the painter and shopkeeper. And then one day carts loaded with flowers drove up to the hotel where the artist lived. If you believe the lines of Paustovsky, not only roses, but also acacia, Iranian lilacs, anemones, peonies, lilies and poppies. There were so many that the street was transformed and literally bloomed. It was a gift from Pirosmani. He sold a shop to surprise his beloved.

There are two versions of how this romantic story ended: lyrical and sad. Which one to believe, choose for yourself. In the first case, the Frenchwoman left with a rich gentleman, never knowing who made this wide gesture. And in the second she gave the artist a single kiss. Soon the tour of the theater ended, Margarita and Nico never saw each other again. In memory of the painter was a portrait of the actress, painted by himself.

One can only guess what is true and what is fiction, but this story inspired many, including Andrei Voznesensky. And the song about the poor artist for several decades continues to excite our hearts.