Eyyub Kuliev: “Isolation doesn't bore me at all”

The main conductor of the State Opera and Ballet Theater of Azerbaijan Eyyub Kuliyev told the “Vestnik Kavkaza ″ about Victory Day, self-isolation and creativity.

- A few days ago we celebrated the 75th anniversary of the Victory over Nazi Germany. Did that war affect your family in any way?

- Of course, this is a sacred event for all of us. This is a part of our life. Literally in every family there is at least one person who participated in that terrible war. Both uncles of my father fought, were awarded. We presented data and photographs of one of them, Gabil Kuliev, to the Immortal Regiment, found materials where he fought and was wounded.

This is our story, and no one has the right to forget about it. Every year we celebrate Victory Day. May 9 is a holy day for us. Azerbaijan took a very serious part in the war: many fought on the fronts and Baku oil helped a lot in the victory over fascism. I think (and my opinion is shared by many Azerbaijanis and non-Azerbaijanis) that Baku deserves the title of Hero City.

On the initiative of the Azerbaijani channel "Culture" we made an interesting project, a flash mob dedicated to the Victory. Pikya Akhundova, a very talented composer, wrote a new song, and we asked our colleagues - soloists of the opera houses of the republics that were part of the Soviet Union - to record this song, each at home. In a very short time we made a decent clip. Opera soloists from Moscow, from Odessa, from Minsk, from Kazakhstan, from Kyrgyzstan, and Uzbekistan took part in this project. People really enjoyed it. This event was covered both in Azerbaijan and in other countries. Now I go to the project page and see how many likes there - people come in, look, congratulate, write very nice comments. This is a tribute, a modest symbolic gesture, our bow to the heroes who won the war.

- Eyyub, the coronavirus epidemic has made adjustments to the usual life of people. Even the Victory Parade in Russia was postponed to a longer time. Baku is already beginning to gradually come out of self-isolation, but nevertheless the restrictions have not yet been fully lifted. How did you spend these difficult days?

- Of course, it was not easy. Before the pandemic, I toured a lot, led an active concert life, performed abroad. There were plans for tours in Europe, in Canada, in Russia - with the Mariinsky Theater, we planned in May to stage the ballet "1001 Nights." All this had to be postponed indefinitely.

The Baku Opera House postponed performances and rehearsals. Before the pandemic, we were preparing for a joint festival with the Roman Opera House. This is a traditional festival that we hold every year in May in Baku, we invite famous musicians, opera singers, conductors from Italy. Because of the coronavirus, everything stopped abruptly. Feels like an athlete who runs at high speed, and suddenly they say to him: "Stop!" And it is necessary to stop for an indefinite time. This, of course, is not a very pleasant sensation. But you need to find options to usefully spend this period.

The activity of a concert artist takes all his time; he is not with his family, rarely communicates with children. My daughter Maryam, the object of our love, our happiness, our pride, used to see me more often via Skype or Whatsapp, but now we draw, play, and learn some piano works, although I'm not a pianist. I am very interested in spending time with her.

My wife Nargiz Kulieva is a successful artist. She was lucky - the workshop is at our place, so she continues to work. And I got the opportunity to learn how Nargiz does this, to learn the technique of drawing, history. She always shared her secrets, but now I began to delve deeper and deeper into the process. 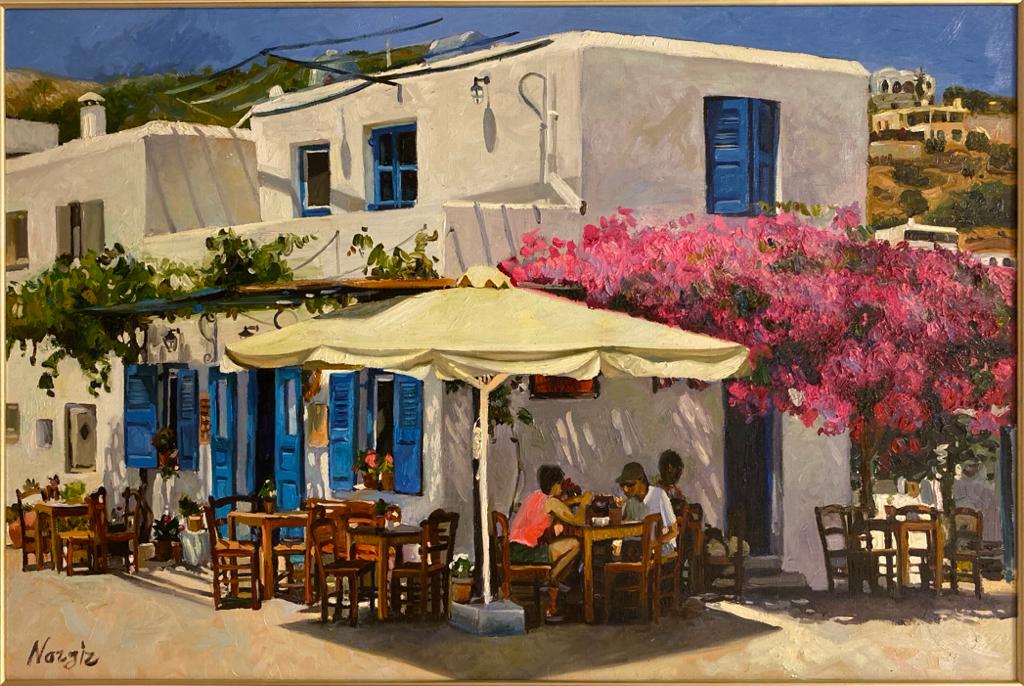 I managed to read or re-read books that had no time before. This is fiction and music. I don't miss isolation at all.

In addition, our opera house continues to work on a "remote". The Azerbaijani channel "Culture" together with the Ministry of Culture launched the project "Culture that unites us." Musicians of the symphony orchestra who work in the opera house have recorded excerpts from the ballet "Seven Beauties" by Kara Karayev. I accompanied some of them on the piano. They also recorded Verdi, and ballet dancers made their flash mob out of the house about how they are doing.

We made another project with the soloists of opera houses in Turkic-speaking countries - Kazakhstan, Kyrgyzstan, Uzbekistan, Turkey. Together we recorded the famous song Freddie Mercury We are the champions; posted on the Internet, there were a lot of good reviews.

Another very important project for our theater is "Virtual Theater". Almost all the famous opera houses - La Scala, Covent Garden, Metropoliten ... - opened access to the video archive. People can safely visit the site, watch famous performances performed by mega-popular opera singers or ballet performances with the participation of famous ballet dancers. We also did not stand aside: we updated the site of the opera house, opened a new channel on Youtube, a page on Facebook, on Instagram. Every week - on Wednesday, Saturday, Sunday - we show our performances. The videos are very high quality. The project involved both soloists of the Mariinsky Theater and soloists of the Bolshoi Theater.

In a word, we did not have the opportunity to get bored.

- You work both in Russia and in Azerbaijan. How do you work in Russia?

- Russia is the place where I studied, graduated from the St. Petersburg Conservatory. I am very attached to this country, to its culture, I have many friends in Russia, and there are more and more of them. These are famous musicians, cultural figures. Every time I come, I hardly find time to meet with each of them, to talk. But this is a tremendous pleasure.

I have close creative and friendly contacts with many Russian groups in Moscow and St. Petersburg. I had the opportunity to speak repeatedly in Novosibirsk, in Kaliningrad, in Smolensk. Now I'm going to Vladivostok - for the first time I will conduct there.

When I was still in St. Petersburg, I won the international competition in Poland, after which the President of the Musical Olympus Foundation Irina Nikitina invited me to the festival, the idea of ​​which is that the laureates of the competitions get the opportunity to perform with the best Russian orchestras on the best stages of St. Petersburg and Moscow. After that, we began a good relationship with Musical Olympus. By the way, the Russian channel "Culture" was the first to contact me during self-isolation, asking me to take part in a flash mob - I recorded, sent, I am pleased.

I conducted three times in Moscow at the Nutcracker children's contest with the best orchestras - these are both the Russian National Orchestra and the Moscow Philharmonic Orchestra. In my opinion, I am a record holder, because usually this contest is invited only once.

I participated in the project "Grand Opera" of the channel "Culture". Now we have already sent an invitation and we hope that one of the leading orchestras of St. Petersburg will come to us at the Uzeyir Hajibeyov festival. The famous cellist professor Sergey Roldugin, Pavel Melyukov, a wonderful violinist, Miroslav Kultyshev, the winner of the Tchaikovsky competition, have already performed at this festival. Soon Alexey Melnikov will come to us.

I also worked for five years as a guest conductor and now often give concerts in the North Caucasian Philharmonic named after IN AND. Safonova, whose orchestra worthily declared itself; I think he has a great future. The Philharmonic has nine concert halls where performances and concerts are held. I remember a wonderful concert with Nikolai Lugansky, with Andrey Diev, with Sergey Pavlovich Roldugin. Every time I have a holiday, when I receive an invitation from Russian groups, and I look forward to these meetings.

- Today it is difficult to make plans and talk about upcoming plans. Nevertheless, is something planned for the second half of the year?

- There are plans, of course. Most likely, the ballet will premiere at the Mariinsky Theater in the fall. A unique project was planned on the channel "Culture. Russia" for December - two wonderful concerts with the Moscow Philharmonic Orchestra. In September we are waiting for the orchestra of the St. Petersburg chapel in Azerbaijan. We hope that they will come to the Uzeyir Hajibeyov festival. I am also friends with musicians of the Novosibirsk Philharmonic Chamber Orchestra. Every visit there is a great holiday. I hope we can meet with them again and do some kind of joint concert in Novosibirsk.

In addition, my wife was invited to a festival in Moscow, where her exhibition will probably be held. In other cities of Russia, they are also interested in the work of Nargiz. There is an idea to make a competition among young artists, where she will be the chairman of the jury. In Bashkiria, a contest, master classes, a festival are planned, and in the final, an exhibition of hers, and, possibly, a symphony orchestra concert with my participation. I hope that all this will take place soon. The main thing is that everyone is alive and well.

Below are paintings by Nargiz Kulieva, painted while in self-isolation