After the Second Karabakh War, the region is moving towards peace and prosperity

The trilateral statement signed by the president of the Republic of Azerbaijan, the prime minister of the Republic of Armenia and the president of the Russian Federation on November 10, 2020 is a fundamental document which determined to complete military operations and establish peace, security and cooperation in the region, political scientist Shabnam Hasanova writes for Eurasia Review.

The statement also reflected clauses on opening all transport communications in the region, owing to which Azerbaijan will have direct overland access to its exclave the Nakhchivan Autonomous Republic, and Turkey via the Meghri transport corridor (which had been used before the conflict in Soviet times) passing through Armenia.

Moreover, the tripartite agreement signed by the same parties in Moscow on January 11, 2021, assessed the new reality and focused on future-oriented issues such as establishing economic relations, restoring the infrastructure, energy, residential buildings and social infrastructure.

In 1993 Turkey, not only because of being a brotherly country to Azerbaijan, but also its fair approach, closed borders with Armenia due to its invasion policy. This influenced Armenia both politically and economically in a negative way. The day right after the Victory Parade that was held on December 10, 2020 in Baku, Azerbaijan, President of the Republic of Azerbaijan Ilham Aliyev and President of the Republic of Turkey Recep Tayyip Erdogan made a joint press statement and offered a new six-sided platform for peace and cooperation in the region including Turkey, Azerbaijan, Georgia, Russia, Iran and plus Armenia, in case the Armenian leadership draws the right conclusions from the war, and renounces its unfounded claims. Azerbaijan and Turkey demonstrated that they are ready to end the enmity, take peaceful steps and actions in accordance with this. Turkish Foreign Minister Mevlut Cavusoglu also declared that if Armenia observes the ceasefire, then relations can be normalized, and this will be for the benefit of Armenia and its people.

At this stage Azerbaijan’s liberation of Karabakh from the Armenian occupation opens a new page not only in the history of two countries, but also in the entire South Caucasus region. As everything was destroyed it is not easy to restore life on the liberated territories, but Azerbaijan has already started to implement all what is necessary. In this direction the concept and master plans of all liberated cities are being prepared by the Azerbaijani government for the development of those zones.

As a state Azerbaijan will carry out the main work by itself. At the same time, Azerbaijan opens wide its doors for private investors, as well as for governmental structures to cooperate who will participate in the reconstruction of the liberated areas. Several states and companies are already determined to expand relations with Azerbaijan and contribute to the development of industry in the liberated areas. By making investments, local and foreign investors will be able to secure their business interests and have their say in the long-term supply of Azerbaijan with sources of uninterrupted, cheap, and environmentally friendly energy. 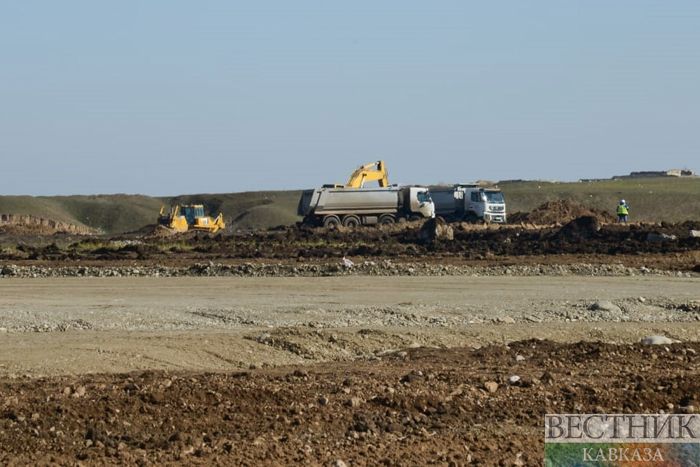 When Minister of Foreign Affairs of the Islamic Republic of Iran Mohammad Javad Zarif was received by President of the Republic of Azerbaijan Ilham Aliyev on January 25, 2021, he said that Iran is also open to cooperation and wants to take active part in the restoration of liberated areas. President Aliyev several times stated that the liberated lands would be a green energy zone. As hydropower plants have the greatest potential in the region Iran and Azerbaijan agreed on cooperation in the field of renewable energy for the construction of Khudaferin and Maiden Tower hydro junctions.

Also, due to Italy’s position during the war, Italian-Azerbaijani relations have further improved. As a result, Italian government and companies will also actively take part in the reconstruction process. On February 3, 2021, when Aliyev received in a video format a delegation led by Chairman Fabrizio Di Amato, of the leading international company Maire Tecnimont Group operating in Azerbaijan for more than seven years, it was stated that they were involved in new projects.

On January 27, 2021, Azerbaijan’s Economy Minister Mikayil Jabbarov met with the US Ambassador to Azerbaijan Earle Litzenberger. The ambassador said that US companies are also ready to participate in the restoration of the liberated lands, especially, they are interested in water resources management, road and other infrastructure, cooperation in the field of digital and innovative technologies. On the same day Minister of State attached to the Minister for Europe and Foreign Affairs of the French Republic Jean-Baptiste Lemoyne said that big, world-famous French companies are represented in Azerbaijan and there are no barriers to the implementation of projects by these companies in the liberated Azerbaijani territories. Under the leadership of Aliyev, Azerbaijan is pursuing a constructive policy and cooperating with countries in the region and around the world on mutually beneficial terms. According to the high-level agreement between Azerbaijan and Turkmenistan, a Memorandum of Understanding was signed between the Government of the Republic of Azerbaijan and the Government of Turkmenistan on January 21, 2021 in Ashgabat on the joint exploration and development of hydrocarbon resources of the “Dostlug” field in the Caspian Sea. Another robust fact in this direction is that with the completion of Trans Adriatic Pipeline, the last segment of the Southern Gas Corridor, and which for Azerbaijan is a historical achievement.

With the construction of this mega project, Azerbaijan once again proved itself as a reliable partner to the involving sides such as government of Georgia, Turkey, Bulgaria, Greece, Albania, Italy and European Commission, supporting sides, United States and the United Kingdom and leading international financial institutions, World Bank, EBRD, Asian Development Bank, European Investment Bank and Asian Infrastructure Investment Bank.

Furthermore, transport projects in the region have a special role to play in the long-term development of the region, ensuring stability and reducing the risk of war to zero. In this direction, the new transportation connections are now in the stage of discussion. There will also be a railway connection between Russia and Iran through the territory of Nakhchivan and railway between Turkey and Russia. The railway line from Russia to Armenia may be opened which can only pass through the territory of Azerbaijan.

These all are positive tendencies and they demonstrate that not only the peoples of Armenia and Azerbaijan, but also the peoples of other countries in the region, can benefit from such formats of cooperation.

This is all clear evidence that issues in the region can be resolved through dialogue and cooperation. Despite the fact that some political groups in Armenia are calling for the preparation for a new war against Azerbaijan, there are also some politicians who truly assess the new reality and consider that taking part in any of the aforementioned platforms corresponds to Armenia’s interests. As such, the statement came from Armenian Deputy Prime Minister Mger Grigoryan that the restoration of transport links in the region will in itself ensure Armenia’s security and statement by Prime Minister Nikol Pashinyan that Armenia needs to improve relations with Turkey and Azerbaijan and points of contact with them at a meeting of the country’s Security Council are considered as positive messages.

The Turkish-Russian Monitoring Center that opened in Azerbaijan’s Aghdam district on February 5, 2020 has the responsibility of taking all necessary measures to prevent violations of the ceasefire. Armenia should analyze the consequences of its actions appropriately and recognize that the only way to ensure stability and the well-being of all nations in the region is through peace and cooperation.

At a time when the world economy is experiencing great problems in the current pandemic, Azerbaijan plans not only to restore and reconstruct the territories liberated from Armenian occupation, but also to implement the concepts of “smart city” and “smart village” with the direct initiative and instructions of President Aliyev.

As mentioned, the liberated lands will be a “green energy” zone. Despite the fact that Armenia has destroyed all hydroelectric power plants, preliminary investigations have already been conducted and the first “smart village” project will be implemented in ruined village of Aghali, Zangilan district. The project was launched on February 14, 2021 during Aliyev’s and First Lady Mehriban Aliyeva’s visit to Fuzuli, Zangilan, Lachin and Jabrayil districts.

The “Smart village” project will be carried out on five main components such as housing, production, social services, “smart agriculture” and alternative energy. The energy needs of 200 village houses to be built will be obtained only from alternative energy sources. In the destroyed and looted village of Gulabird, a hydroelectric power station was commissioned in a short period of time. This project is the first power plant in the liberated lands, and other stations will be built in the nearest future. Another special place among the restoration work is related to electricity supply. In this regard, “AzerIshig” Joint Stock Company has already extended power lines to the city of Shusha.