23 Jul in 20:00 Head of the Department of International Relations of the Azerbaijan Community of the Nagorno-Karabakh Region Aybeniz Ismayilova

For decades, the city of Aghdam was famous for the hard work of its people, and thanks to its hard work, the city flourished; beautiful houses and lush landscapes were pleasing to the eye. Residents of Aghdam were distinguished by their lively and cheerful disposition, efficiency and sociability. Aghdam's bustling life can probably be compared to how the city of Macondo was described in his famous novel by Marquez. Today Lonely Planet, Al Jazeera and other world media have declared Aghdam a "ghost town", as only ruins remain of it - empty houses and quiet streets. It is also called "Hiroshima of the Caucasus", because this is a city where life completely disappeared after it was occupied by the Armenian armed forces on July 23, 1993.

The Karabakh war has incredibly changed the fate of hundreds of thousands of people. In one day, they lost their land, houses and, most importantly, their usual life. The expulsion left a mark on each of the living generations of the Aghdam people. The old people prayed to God to die in their native lands, and the children, as they matured, wondered if the memories of their villages and houses were real, or if it was just a mirage. At the same time, the middle-aged generation had no opportunity to think about death or memories, since all the burden and suffering of the war and leaving Aghdam fell on their shoulders. They had to console their elderly parents, feed and equip their families, restore their "zeroed" ones in one day of life ... How difficult was the life path of this generation, who left Aghdam at the age of 30-40. Today they are 60-70 years old, which means that the most beautiful and energetic years of their lives were spent in panic, poverty and hard work. Once, opening their eyes, they realized that they had already become old. Longing for the homeland, the grief of parents who died without ever returning home, and children growing up outside their native lands - all this made them old ...

Teyyub Huseynov is 70 years old. He was born in the village of Shykhbabaly, Aghdam region, in 1973-1977 he worked in the Kuibyshev region of the RSFSR. In 1977-1993 - at the "Azersu Construction Union" in the Beylagan and Aghdam regions, in 1988-1993 - as the head of the mechanized mobile group No. 25 in Aghdam. Was the chief technical inspector for the construction of 20 refugee settlements. Teyyub Huseynov now works as a senior technical manager at the Social Development Fund for Refugees. For almost 30 years he has been missing his native Aghdam, lost as a result of the Karabakh war.

- Teyyub muallim, how do you remember Aghdam and the life of your family there?

- My father Nuri Huseynov worked as a driver in the Shikhbabaly village of Aghdam region. Our village was located on the right bank of the Gargar River, with fields on the left side of the river and gardens on the right. The writer Ali Veliyev wrote about our village in his novel "The Samovar Smokes": "People here say that you smell Shykhbabala flowers in spring and eat their fruits in autumn." With the onset of spring, these places acquired special beauty. Our family was engaged in farming, from the age of seven I looked after sheep and goats. We herded sheep and lambs with the neighboring children, played classics and chilling agaj (a game reminiscent of cricket). When the level of the river lowered, there were many fish in it, so we left the sheep in the shade of the stones and fished. Fish with black and red spots swam in the river, and later I learned that they are called "trout". Now I think these days were the best in my life, although I did not understand it then. I often remember the beauty of these places and the time I spent with my childhood friends.

I graduated from high school in 1968, went to university where I graduated as an engineer. I got married in 1978, we had two sons and a daughter. He worked as the head of the mobile mechanized detachment No. 25, located in Aghdam, our company carried out construction work in Lachin and Nagorno-Karabakh. With the outbreak of the war, everything fell apart - both our work and our life. Since 1991, the socio-political situation in relations with the Armenians has become even more tense. The war drove us out of our homeland.

- How do you remember those years?

- At that time the headquarters of the Nagorno-Karabakh Committee was located in the administrative building of our enterprise. I provided all kinds of assistance to her work. In May-June 1993, the Armenians fired at the city of Aghdam and other settlements. Our village was not far from Armenian villages. The sounds of artillery did not stop day or night. Keeping my family in the village became very dangerous, and I transported my father, mother, brothers, three children and wife to the village of Khusulu (Agjabadi). My brother Azay was a soldier in the National Army. When I returned to my village, it was destroyed and very few civilians remained. Three artillery shells fell on my house and yard, in the yard I met two unarmed soldiers. I remember sitting on the stairs of our house, and still cannot forget the feeling of helplessness that I felt then ...

- Where did you find refuge?

- In the same year, our last hopes were lost. Our whole family left for Baku. A relative living in the city of Zabrat gave us a room to live and a piece of land the size of a room, where we settled down. The first summer the children cried because of the mosquitoes, because there were never any in our village. This period was the beginning of our most difficult days. The hardest part was finding a home to live in Baku. With the help of a neighbor named Azer, after much suffering, we bought an apartment in the village of Guneshli. Then I felt joy for the first time since the start of the war. My children had to go to school. I had no money to support my family, and I took on all sorts of things, since at that time it was very difficult to find a job. Then a friend offered me a position in the newly opened Social Development Fund for Refugees and Internally Displaced Persons. I started working in an office and soon started building houses for refugees. I was sent to the construction site at my own request, as it was to my liking. While working there, I often climbed a nearby hill and looked towards our village. It seemed to me that I could feel the air of Shikhbabala.

- What was the fate of your parents?

- My mom Shirmayi died in 1998, and my dad in 2018. In memory of my parents, I have a garden. Relatives and friends call it "Aghdam Garden". My father lived in it, breathed in this garden, and now my younger brother is looking after him like a memento left by his father. We are four brothers in the family, and now we all live with our families in Baku.

- What do you miss the most?

- I am now 70 years old, my children grew up, got an education and started families. I have seven grandchildren, and I tell them about our village, I want them to know these places and feel that they belong to these lands. Every corner of Azerbaijan is my homeland, but the land where I was born is priceless. The older I get, the stronger my desire to return to my native lands. I miss every inch of these places, rivers, pastures, trees, grass, everything. I miss my childhood. 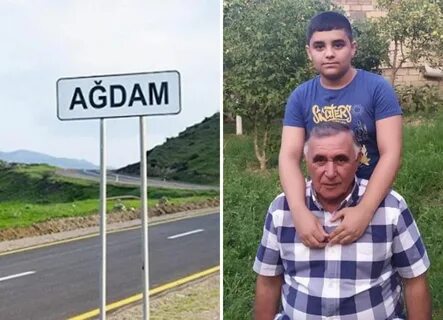 A conversation with Teyyub Huseynov shows how terrible and destructive the war and occupation are. War destroys not only cities, villages and homes, but also the fate of people, families and generations. In a war, not only material, but also spiritual is lost, the opportunity to pass on family traditions, values ​​associated with the homeland to subsequent generations is lost. The opportunity to revive memories is lost.

No matter how Mr. Teyyub tries today, he cannot pass on his memories to his grandchildren, because for this he needs to return to his homeland. We hope that the day will come when Uncle Teyyub will personally meet his memories and show his grandchildren in his native village the places that he once loved and where he was happy. I am sure that the grandchildren of Teyyub muallim will have the opportunity to see their homeland, which they have never seen before, to walk around these lands, to feel the warmth of these places.

At present, the grandson of uncle Teyyub Khazar is a fan of the Aghdam football club "Garabagh". In 2019, the well-known Spanish edition AS wrote about the match between Karabakh and Sevilla in the UEFA Europa League: "Karabakh has been playing at home games 250 km from the city it represents for 26 years. Aghdam is Hiroshima of the Caucasus, a ghost town." ...

The day will come, and Khazar and other grandchildren of Uncle Teyyub will come to Aghdam and cross it off the list of "ghost towns". Aghdam will return to its former noisy life, and Uncle Teiyub will definitely see these days. His Aghdam will no longer consist of only one "Aghdam Garden" in Baku ...