Kyrgyz Prime Minister Muhammedkaly Abdylgaziyev said the Kyrgyz-Chinese joint venture (joint venture) of the At-Bashi free economic zone refused to build a trade and logistics center in the Naryn region worth $ 280 million after a series of protests by local residents. Sinophobia is one of the driving forces for speaking out against the authorities, especially before the parliamentary elections that will be held in the fall of 2020. The logistics center could become one of the largest and compete with Kazakhstan's Khorgost.

"Unfortunately, the company announced its forced decision to leave the project due to the artificial escalation of relations with the local population. We regret to say that the factor of people's distrust of the authorities leads to the departure of such a large investor," he said. Abylgaziev at a meeting with representatives of business and donor organizations. In his opinion, the reason was people's distrust of the decision of the authorities, "when large projects, instead of becoming the flagships of the domestic economy, became a nest of corruption, an example of betrayal of the interests of the country, they destroyed nature and became politicized." At the same time, the opinion of citizens was not taken into account, and the interests of the local population were not protected. He promised to revise the principle of work in the field of investment protection in Kyrgyzstan. "The government will continue to focus on attracting large foreign investments to the country and creating all the necessary conditions for doing business in Kyrgyzstan," the Prime Minister emphasized.

The growing anti-Chinese sentiment in Kyrgyzstan is damaging the country's reputation in the eyes of foreign investors and partners. Chinese projects are a lifeline for Kyrgyzstan, whose economy without them is unlikely to find any decent place in the global division of labor. Meanwhile, the plans include the implementation of the China – Kyrgyzstan – Uzbekistan railway construction project.

The agreement on the construction of a logistics center was signed in the summer of 2019 during the state visit of President Xi Jinping to Bishkek, and its implementation promised to bring considerable dividends to the republic. 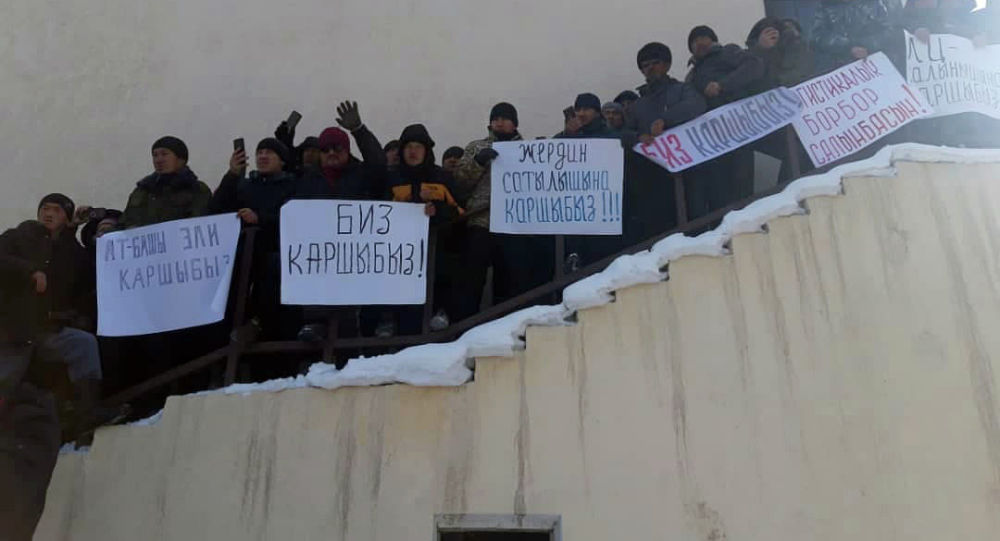 A land plot of 200 hectares in the Naryn region was allocated for the construction of the center of power and a free economic zone (SEZ) was created. Investors - JV LLC Nur Stroy Montazh and One Lead One (HK) Trading Limited have pledged $ 615 thousand. And the head of the Kyrgyz government, Muhammedkaly Abdylgaziev, at the end of December 2019 laid a capsule at the center’s construction site. It was planned that the complex will consist of warehouses, trade exhibition and cargo terminals, hotels, catering establishments and a gas station. Sports and entertainment zones, business centers and manufacturing enterprises were also provided, which, taking advantage of the presence of Kyrgyzstan in the Eurasian Economic Union, could reindustrialize some projects without violating the laws of the integration association, but using Chinese raw materials, components, and semi-finished products.

From the very beginning, the investor estimated his costs at $ 280 million and 15 thousand jobs with the prospect of growth. Of these, 13 thousand jobs were given to local residents. As for the land, it was leased for 49 years. The rules of the FEZ “Naryn” extended to all this territory. Under the current legislation, the land manager should be the At-Bashi Free Economic Zone, and the At-Bashi Kyrgyz-China Erkin Soyma Aymagi joint venture should be the tenant. For Central Asia - Kyrgyzstan, Tajikistan and part of Uzbekistan - this would be a very convenient place, adviser to the Prime Minister Kubat Rakhimov told Vestnik Kavkaza.

The place was not chosen by chance. Naryn Oblast borders on China. The constructed North-South highway, which connects the north-east with the south-west of the country and the Ferghana Valley, is ready for operation. Logistic flows go through the Torugart border post, though Chinese imports prevail over Kyrgyz exports, and the creation of a logistics center for the transshipment of goods, similar to Kazakhstan's Khorgos, is beneficial for both the Chinese side and the Kyrgyz one. Moreover, according to the expert, the Torugart transition, when compared with Khorgos, is more profitable. It is more direct and shorter, and that is very important, can work year-round.

Nevertheless, the Chinese investor was forced to curtail the project due to the discontent of the residents of the Naryn region, who protested the construction of the center. For several days, people went to rallies demanding to terminate the agreement with a Chinese businessman and attract local businessmen to the construction. They are also convinced that they will lose their lands, and these are alpine pastures, although not year-round. 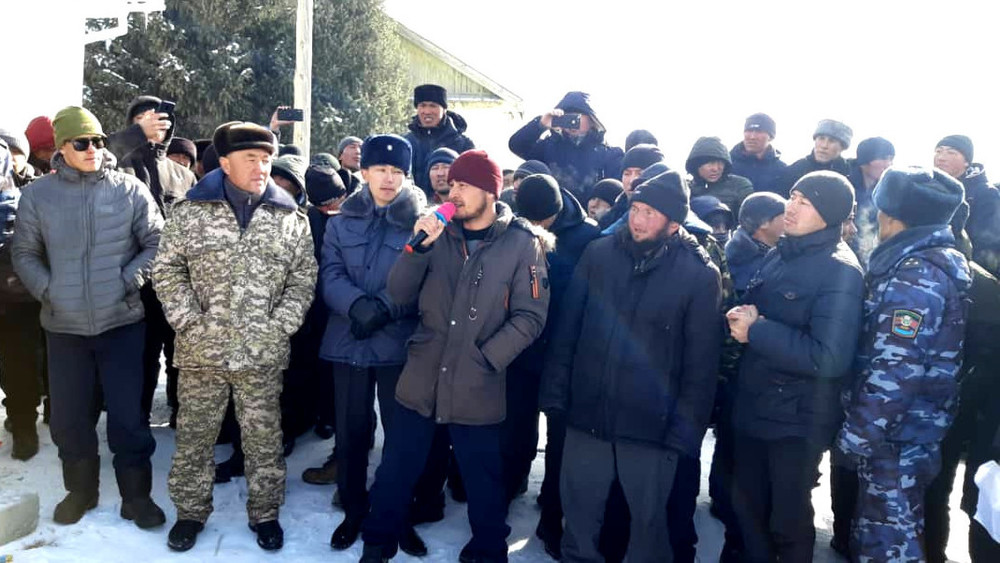 At-Bashi company closed the project and demanded to return the invested 615 thousand dollars. "The termination of the contract for the construction of the At-Bashi industrial-trade-and-logistics center will negatively affect the investment climate of Kyrgyzstan, said Temirbek Azhykulov, director of the Association for the Development of the Agroindustrial Complex. In his opinion, this spoils the investment climate and the country's image in attracting foreign capital." How many people say that it is necessary to support business. This was just a good example of the fact that we can attract investments not only in the mining industry. This was the first unique project, and not cheap, the $ 280 million that the investor was planning to invest - a lot of money, "said Azhikulov. At the same time, he acknowledged that there was very little information about the center, the state and investors did not carry out explanatory work with the population .

Kyrgyz politician Felix Kulov believes that the current situation will affect the investment attractiveness of Kyrgyzstan in the most negative way: “Laws on the protection of investments do not work, investors, seeing the helplessness of the government and the toothlessness of the judicial system, simply do not risk investing in the Kyrgyz economy. Unfortunately, without attracting investments counting on a revitalization of the economy is now simply unrealistic. a striking problem, it seems in the application of new approaches with the participation of our citizens with their direct personal interest, "said Kulov. The cost of the logistics center, according to media reports, is estimated at $ 280 million, the investor will invest $ 140 million, and the Kyrgyz government $ 50 million. “Kyrgyz entrepreneurs, I’m sure, will draw another fifty million dollars. (They can enter not only with money, but also with construction and other materials and means); the remaining shares worth 40 million dollars can be given the opportunity to purchase our citizens in installments throughout of the construction period. It would also be correct from this amount to donate shares to the local council, for example, in the amount of $ 1 million for the allocation of land, "Kulov said.

He believes that the logistics center is a very profitable enterprise and many people without special damage to the family budget would be able to purchase installments for 400-500 or more dollars in installments in three to four years. With this approach, the population will not only not oppose it; on the contrary, it will most actively support the project as a shareholder - co-owner of a promising and profitable enterprise.

Kubat Rakhimov called sinophobia one of the main reasons for the expulsion of investors: “Recently, a number of projects involving Chinese investors have been closed in Kyrgyzstan. The event is unpleasant, but suggests that investors need to analyze the situation more deeply. Businessmen who enter the republic should take yourself the extra costs, and understand what risks await them here. " But the adviser to the Kyrgyz prime minister is sure that blaming the Kyrgyz government is shortsighted. "There is a serious flaw on the part of the investor, who did not take into account a number of points, did not attract professional consultants to agencies involved in in-depth development of issues with local communities," Rakhimov said. In his opinion, it is for this reason that many projects fail, especially in the mining industry. For example, the "uranium business" is already a classic, when serious investor mistakes led to the fact that the authorities banned the extraction of uranium throughout Kyrgyzstan. Now, two-thirds of the mining complex are under attack, because the specifics of Kyrgyzstan is such that uranium is contained in many rocks.

Kubat Rakhimov also focused on the fact that Kyrgyzstan entered a new political phase: 2020 is the year of parliamentary elections, which means a year of loud statements: “The replacement principle is such that if the economy is small, then people go into politics. This is a national form "sports," but also business. Because there are certain financial relationships and customers. "

“Investor withdrawal is bad, but not critical, since Kyrgyzstan remains a country with a certain level of attractiveness. There are different investors, with different interests, with different understandings of risks. Another thing is how deeply they approach and work out their solution with high quality. There are several dozen successful in Kyrgyzstan projects, and there are several negative examples. This suggests that the situation needs to be analyzed. As for the Chinese leader of One Lead One (HK) Trading Limited, Liu Ina, he is successfully developing his business in Repub he’s not going to leave the Kyrgyz market, ”the expert stressed. 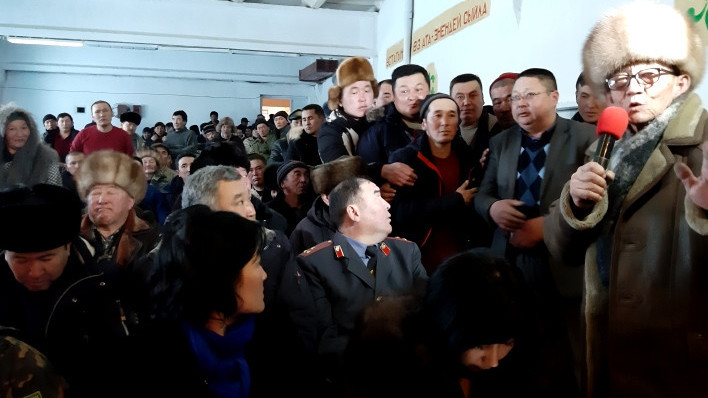 Recall that earlier in Kyrgyzstan repeatedly broke out conflicts between local residents and representatives of Chinese companies that are engaged in the development and exploration of various fields. Recently, anti-Chinese hysteria has intensified. The situation was made worse by the publication in 2018 of data on misappropriation of funds for the modernization of Bishkek's CHPP and the initiation of several criminal cases of corruption. China allocated a loan of 386 million dollars for this project, and Chinese specialists were engaged in modernization. It became known that Bishkek owed Beijing 1.7 billion dollars, which is 41.3% of the country's foreign debt.

As a rule, protesters demand to reconsider relations with China, check all enterprises with Chinese capital, deport Chinese illegal immigrants from the country and stop issuing labor quotas to Chinese citizens. Participants in the rallies oppose corruption in the highest echelons of power and for transparency in the financial activities of the government, especially in terms of spending Chinese grants and loans. Protesters also do not like the fact that Kyrgyz girls marry the Chinese. They demand to prohibit the registration of mixed marriages or fine the newlyweds. According to rumors, about 60 thousand Kyrgyz people have already preferred Chinese men to local warriors. True, in fact, the girls who married the Chinese turned out to be no more than a hundred.

The protesters do not take into account the role of China as the main trading partner and the most powerful investor in Kyrgyzstan, with the help of which the largest industrial and infrastructure projects have been implemented. Who warms up and brings the population to anti-Chinese actions? According to experts, the remaining out-of-work politicians are driving a wave of protest.