The difficult epidemic situation did not allow the heads of Azerbaijan Ilham Aliyev and Armenia Nikol Pashinyan to arrive in Moscow at the Victory Parade. Two warring nations today - the Armenian and Azerbaijani, who fought against fascism 75 years ago and celebrated a common victory for all, were represented in Moscow by the heads of defense departments Zakir Hasanov and David Tonoyan.

Two neighboring peoples with traditions in which similarities are easily seen, are far from having a different attitude to life, interpenetrating folklore, an abundance of mutually borrowed words in their native languages, idiomatic expressions, traced sayings and proverbs, etc., probably not without problems and roughnesses but who have lived for decades at the very least in the world and have created mixed families, today look at each other mainly through sights of weapons, in intra-communal disputes, using the name of the “opposing” nation as a harsh insult. Such is the tragic reality, which, apparently, will not soon be able to reformat, restart.

Even the coronavirus epidemic did not affect the state of affairs. Violations of the ceasefire on the contact line continued to be regular, and the parties were equally regularly accused of provoking each other. The pandemic did not prevent Azerbaijan and Armenia from conducting military exercises at the same time - in the second half of May. The tasks of the parties in the exercises were mutually opposite, consistent with the stated goals. Azerbaijani troops repulsed and returned conditional territories. Armenian troops repulsed the attacks of the conditional enemy and held their positions. After the exercises, both defense ministers announced the success of the exercises. Zakir Hasanov said that with the resumption of hostilities, the Armenians will not be good enough and the war will be a disaster for them. David Tonoyan stated that the Armenian troops are ready for any scenario and will undoubtedly give a worthy rebuff. Given the periodic accusations of official Baku and Yerevan of the unwillingness of the world to solve the Karabakh problem, everything looks very sad even taking into account periodic optimistic statements by mediators from the OSCE Minsk Group (MG) in charge of the negotiation process.

The seriousness of the situation in the region has repeatedly become the subject of study by military experts. The other day, the influential Forbes publication took up this. An article published on its pages states that the opposing sides are armed with an increasingly advanced technology of drones for espionage and strikes. The alarming consequences extend far beyond this small corner of the world. “A ceasefire agreement was reached with the participation of Russia in 1994 ... In 2016, a short-term war broke out with many casualties on both sides, and I also remembered that for the first time Israeli Harop kamikaze drone-based drones were used on a large scale ... Drones hit many targets, including the artillery mounts of the Armenians, air defense systems, ”the publication said.

Today, both Azerbaijan and Armenia have established the production of their own drones. Forbes notes that drones are ideally suited for this type of conflict, like the Armenian-Azerbaijani one - they are cheap, high-precision and can be used without risk for the pilot. “The drone war in the Caucasus could be a drone war in your backyard,” the publication shares concerns. And, alas, this is a greater reality than the conclusion of a long-term lasting peace between two peoples who, to be honest, love to boast of the wisdom of their ancestors, glorious history and traditions, friendliness and tolerance. To show it somehow in practice. 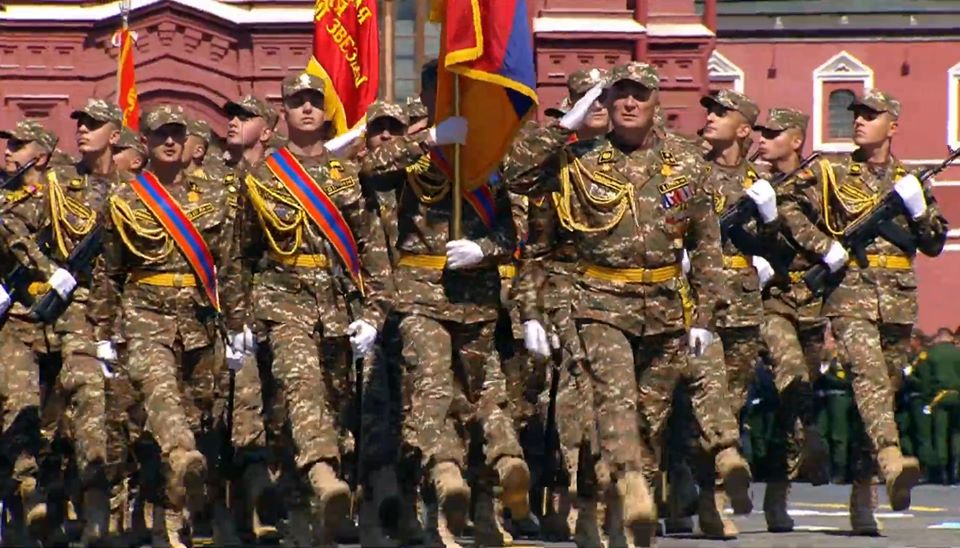 This is especially necessary today, when the grandchildren and great-grandchildren of those who fought together against a common enemy, in the same ranks with other peoples of the former USSR, march along Red Square. After today's parade, there was a persistent feeling of what was brought into our lives artificially, and what was natural and today corresponds to the interests of Russia, Azerbaijan and Armenia.

The military parade was opened by the President of Russia, saying thanks to all the participants and their ancestors, who played a key role in the liberation of not only the USSR, but all of Europe from the fascist plague. It is noteworthy that Putin named in alphabetical order first Azerbaijan, then Armenia, after Belarus, which lost almost half of the population in that war ... Soldiers and officers of Azerbaijan and Armenia walked along Red Square, minting a step. Looking at them, it was difficult not to realize the urgency of restoring peace between the Azerbaijani and Armenian peoples, a just solution to the conflict based on the mutual compromises and principles of justice that our ancestors upheld.

Quarrels arise in any family, conflicts may break out between fellow countrymen, but their prolongation is equally destructive for everyone. Today’s parade once again proved the artificial nature of the conflict over Nagorno-Karabakh. It became clear that the establishment of peace between Armenia and Azerbaijan on the basis of international law, when Russia acts as the guarantor of its preservation, would correspond to the interests of all our peoples and would become a natural continuation of the work of our fathers and grandfathers.

6600 views
later
Putin: my circle includes no people who do not believe in Russia
previous
Will Egypt send troops into Libya?