Fascist or Red Army soldier? Debates about Pashinyan’s grandfather spread throughout the Caucasus

14 May in 18:00 Mikhail Belyaev, exclusively for Vestnik Kavkaza

Since May 9, fierce debates have spread throughout in the South Caucasus over which side did the grandfather of the current Prime Minister of Armenia, Nikol Pashinyan, fight for during the Great Patriotic War - the Soviet Union or Hitler's Germany? The question arose after a harmless, at first glance, Pashinyan's post on Facebook, in which he shared a photo of his grandfather Nikolai Pashinyan. Yerevan.today, a publication close to the previous authorities, which office was raided by law enforcement officials in September of 2018 as part of the authorities’ fight against the “counter-revolution,” quickly published information from the German archives about Nikolai Pashinyan, the Nazi’s henchman.

The certificate of the burial of the Wehrmacht states that someone named Nikolai Pashinyan, bord in the village of Enokovan (Ijevan), was a soldier of the 8190 Armenian Legion, was shot in the stomach on September 29, 1943. Information about the defector is also confirmed by the central archive of the Ministry of Defense of the Russian Federation. Pashinyan Sr. was buried at the German military cemetery of the city of Zvyachel (as the Ukrainian city of Novograd-Volynsky was called on German maps).You can see how this cemetery looked in archive photos: 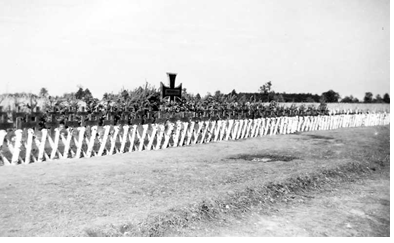 After information about Nikolai Pashinyan, who fought for Hitler, appeared, the Armenian Prime Minister added in the post that his grandfather's patronym was Arakelovich, obviously,hoping to refute the critics.

According to Armenian authorities, two Nikolai Pashinyan were conscripted from Ijevan in 1941. And both were born in 1913. One of them went missing in February of 1943, and the other, at some point, began to collaborate with the Nazis (there's no indication when exactly did it happen) and was killed in September of 1943. Date of Nikolai Arakelovich's, ie Pashinyan's alleged grandfather's disappearance - February of 1943. Nikolai - the collaborator - was shot at the end of September of 1943. Given so many coincidences, it cannot be completely ruled out that we're talking about the same person - given the fact that accuracy of the documents of those years, is pretty poor. In other words, taking into account the outlined time frames, Pashinyan’s missing grandfather could have joined the ranks of the Wehrmacht’s Armenian legion and then killed in September of that year.

It should also be noted that Nikol Pashinyan did not provide absolutely any documents confirming that his grandfather's middle name was Arakelovich, and not Vartanovich. Moreover, it's pretty suspicios that the data about "Arakelovich" is extremely blurry - only the year in the date of his birth was revealed.

Perhaps only 80-year-old Vova Pashinyan, the father of the Armenian Prime Minister, can shed light on the situation, providing the media with his information, which will prove his father’s middle name. Until he does, the public has every reason to consider Nikol Pashinyan a descendant of the Nazi collaborator.

4035 views
later
Valery Charushin: the philosophy of our life will inevitably change
previous
WTO head says he will step down one year early