Land covered with carpet of mines. Hundreds of thousands of Azerbaijanis are waiting to return home

After the Second Karabakh conflict ended, dozens of Azerbaijani servicemen and internally displaced persons died or were wounded as a result of a mine explosion. Most of the civilian victims tried to see with their own eyes what was left of their cities and villages in and around Nagorno-Karabakh. The area remains closed to civilians until the clearance of unexploded ordnance is completed.

RFE/RL informs that Shakir Hajiyev was in his 30s when war forced him to flee his village, southeast of Nagorno-Karabakh, in the early 1990s. The arrival of ethnic Armenian forces in Asagi Seyidhamadli, in Azerbaijan's Fuzuli district, cost Hajiyev his home and his job with the local government. For more than a quarter of a century, he was one of hundreds of thousands of internally displaced Azerbaijanis who dreamed of someday returning to their homes in the seven districts around Nagorno-Karabakh occupied by Armenian forces. Last autumn, when an Azerbaijani military offensive recaptured the war-ravaged territory where Hajiyev's village once stood, he was on the verge of seeing his dream fulfilled. So on November 28, at the age of 65, Hajiyev packed into a Toyota with his daughter Zibeyda Adilzade, his brother Firudin Hajiyev, and another man named Zulfugar Huseynov. They were among the first of Azerbaijan's internally displaced people (IDPs) who tried to return to the recently regained territory around Nagorno-Karabakh. But Hajiyev never made it home. On a road near the ruins of his former village, their car struck an anti-tank mine laid by retreating Armenian forces. All four of them were killed.

The government in Baku has asked IDPs to be patient while mine clearance goes forward and it attempts to restore some basic infrastructure such as living accommodations and electricity supplies. On February 14, Azerbaijani President Ilham Aliyev visited four of the retaken districts -- Fuzuli, Zangilan, Lachin, and Cabrayil -- to launch major infrastructure projects aimed at supporting the return of IDPs. Those projects include housing, manufacturing facilities, social services, agricultural infrastructure, power plants, and railway links. Azerbaijani President Ilham Aliyev symbolically gets work under way on a project to build a railway link in territory near Nagorno-Karabakh on February 14 Aliyev has vowed "to revive the liberated lands and return our internally displaced people to those lands as soon as possible." "We have big plans," Aliyev said at the launch of a hydroelectric power plant in the Lachin district on February 14. "We will try to complete the demining work as soon as possible and assess the damage. At the same time, infrastructure projects have already been launched." Meanwhile, Azerbaijani IDPs tell RFE/RL they are eager to go back to their former towns and villages and start rebuilding. Many say they are only awaiting government word that demining work has made it safe enough to allow their return.

Zabila Mammadova was a schoolteacher in the town of Susa before the war. She knows that one of her two houses there was destroyed while the town was controlled by Armenian forces, who call it Shusi. "We've been waiting almost 30 years for Susa to be liberated so we can return -- or how should I say it? -- to run back there," Mammadova tells RFE/RL. "It's true that it's difficult to return in the current situation," she says, "but perhaps our president will create all necessary conditions for us (IDPs)." Another IDP, Zamin Taghiyev, says he is ready to return to Susa regardless of what awaits him. "Of course I want to return there," Taghiyev says. "Everything there, even if it's now in ruins, is good for me." 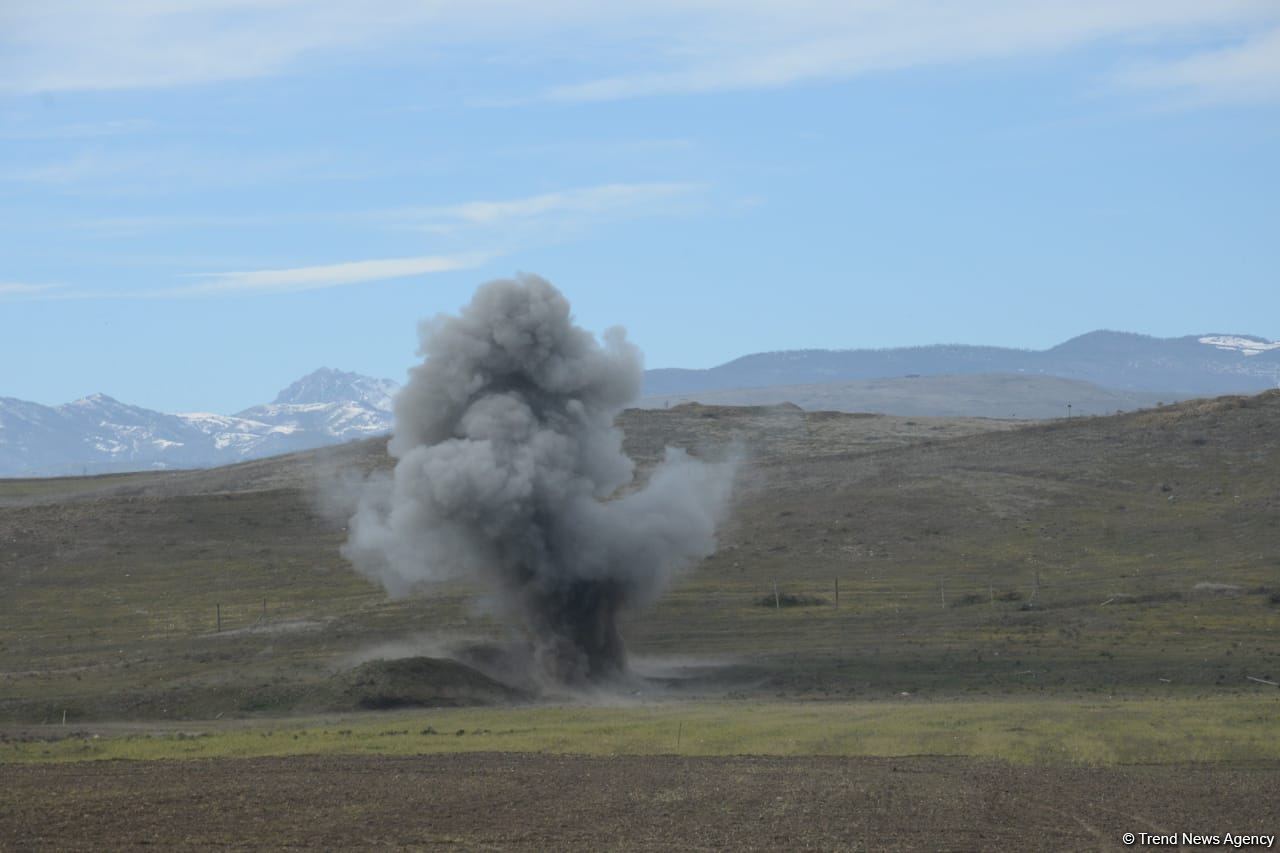 To be sure, the task of clearing mines and unexploded munitions from the battlefields in and around Nagorno-Karabakh is massive. Idris Ismayilov, the operations chief of the Azerbaijan National Agency for Mine Action (ANAMA), estimated in December that it could take up to 10 years to completely demine all of the territory retaken by Azerbaijan. But Ismayilov said he expects enough explosives to be removed within three to five years to allow the safe return of hundreds of thousands of displaced Azerbaijanis.

The worst-affected areas are along the fortified former front lines where land mines had been laid since the early 1990s to create a buffer zone between Azerbaijani and Armenian forces -- particularly near Tartar and Agdam, and in the districts of Fuzuli and Cabrayil. In interviews with RFE/RL, military experts from both Azerbaijan and Armenia have described the ground in those areas as being covered with "carpets of land mines." Human Rights Watch (HRW) said in a December 11 report that much of the unexploded ordnance left by recent fighting is from both sides' use of cluster bombs. Cluster munitions scatter small bomblets that are meant to explode on impact. But HRW says they have a high failure rate, "leaving duds that act like anti-personnel land mines for years and even decades."

Unexploded munitions also pose a grave safety threat in the formerly occupied districts of Azerbaijan that border Armenia. But the problem there is thought to be smaller. That suggests Azerbaijani IDPs from the districts of Kalbacar, Lachin, Qubadli, and Zangilan will be allowed to return sooner than others. 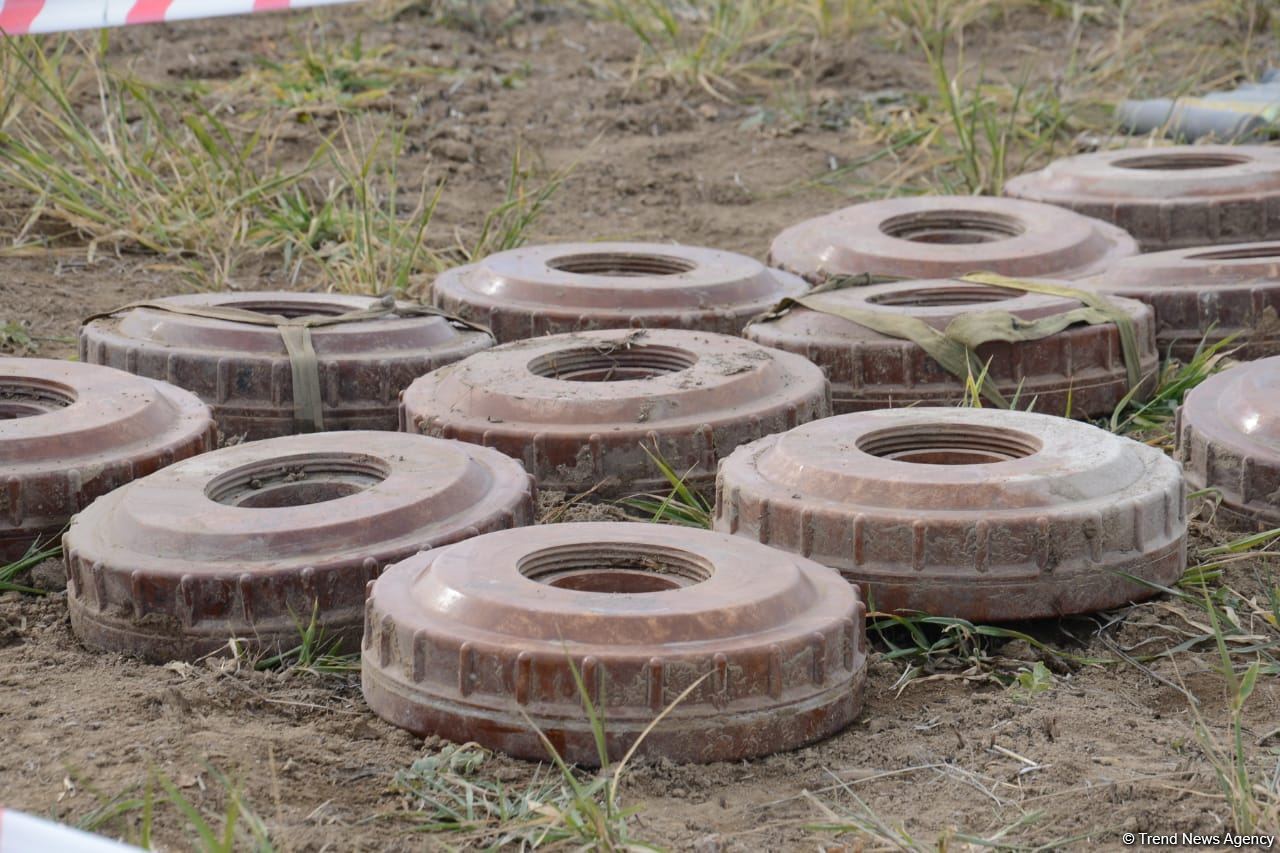 Ghulam Isaczai, the United Nations' resident coordinator in Azerbaijan, says he expects the government in Baku to allow a "phased" return of IDPs after "a safe and secure environment" can be created. "In terms of the larger and older group of IDPs, their return very much depends on creating safe and appropriate living conditions," Isaczai tells RFE/RL. "Currently, the presence of mines and unexploded ordnance is a major impediment to the rehabilitation of these areas and the return of the IDPs." For now, Iscazai says, it is essential for mine-risk education and public-awareness campaigns to target "the IDPs who are desperate to return to their former villages and towns." He says the government's mine-awareness programs will help "to discourage the population from uncontrolled and unauthorized return -- as well as future risk of exposure." "We are pleased that the government has prioritized mine action, which the UN and other international actors are now supporting," Isaczai says.

On February 2, the United Nations released $2 million from its Central Emergency Response Fund (CERF) to support the return of Azerbaijan's IDPs. Isaczai says about $700,000 of that disbursement has been allocated to the UN Development Program (UNDP) "to coordinate mine clearance activities" led by Azerbaijan's government. "A safe environment is also needed for the recovery and reconstruction of affected areas -- including rebuilding of key infrastructure and rehabilitation of agricultural activities such as farming and livestock, one of the main sources of livelihoods for the IDPs," Isaczai says.

Recent photographs released by Azerbaijan's Defense Ministry from the worst-affected areas show that, with the absence of vegetation during the winter months, many land mines are now visible on the ground. But that is expected to change in the spring when they become covered with foliage. "A crucial early step would be a quick land and aerial survey of mine and unexploded-ordnance contamination in all affected areas using modern survey methods and technology before the onset of spring," Isaczai says. "This will help the government to prioritize areas and land for mine-clearance activities and their phased release for civilian use."

Since November, President Aliyev has been expanding the capacity of the state demining agency beyond the 500 specialists it had employed before the Russian-brokered cease-fire. Within days of the November agreement, Russia's military sent a unit of deminers with trained dogs to search for and defuse mines and unexploded munitions in areas where Russian peacekeepers are deployed. Weeks later, Azerbaijan announced the arrival of 136 mine-clearance experts from Turkey's military -- along with metal detectors and protective equipment for deminers. The Turkish troops began in early December to train more Azerbaijanis to clear mines. The head of the Azerbaijani Defense Ministry's Engineer and Fortification Service, Major-General Anar Karimov, says 20 "MEMATT" mine-sweeping vehicles supplied by Turkey also have been successfully tested and are being deployed in some of the most heavily mined areas.