Powered by a small nuclear reactor and with a range of about 10,000 kilometers, the Poseidon underwater drone could when detonated send a deadly tens-of-meters-high tsunami wave into the nearest city or naval base. Shaped like a giant torpedo and nicknamed the “Doomsday Drone,” it is built to carry a nuclear warhead weighing up to two megatons and is designed to autonomously cross the North Atlantic.

Asia Times reports in its article Russia to test ‘Doomsday Drone’ in high Arctic that Russia plans to test its unmanned “doomsday nuke” in its Arctic waters this fall, one year after a fatal nuclear-powered missile accident led to a radiation spike in a nearby city and grabbed international headlines. The nuclear-powered Poseidon underwater drone will be test-launched from the Belgorod submarine, an unnamed defense industry source told the state-run RIA Novosti news agency on Tuesday.

According to a March 2018 report in the Moscow Times, President Vladimir Putin confirmed the existence of the upcoming giant underwater drone. The Poseidon was one of six new “World War III” strategic nuclear weapons presented by the president at the time. At that time, Putin bragged it would be able to whizz through the ocean almost silently at up to 70 knots. “We have developed unmanned submersible vehicles that can move at great depths (I would say extreme depths) intercontinentally, at a speed multiple times higher than the speed of submarines, cutting-edge torpedoes and all kinds of surface vessels, including some of the fastest. It is really fantastic. They are quiet, highly maneuverable and have hardly any vulnerabilities for the enemy to exploit. There is simply nothing in the world capable of withstanding them,” Putin said.

In July 2018, the Defense Ministry released a video showing the workshop where the drone was assembled and an animated film demonstrating how the drone could be used in a real warfare situation, the Moscow Times reported. “A drone has several advantages. A submarine with a crew on board is, of course, a powerful weapon, but there are certain restrictions on the human factor. The Poseidon can practically be on alert and perform assigned tasks at any time,” former GRU colonel Alexander Zhilin told the Kremlin-controlled Sputnik Radio outlet on Tuesday. 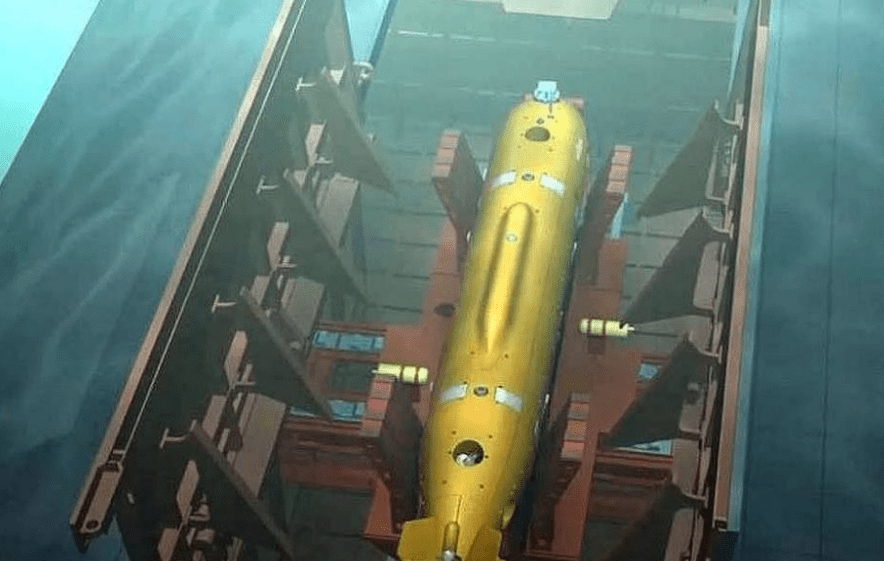 Today, Zhilin is head of the Center for Study of Public Applied National Security Problems with the Lobachevsky University in Nizhny Novgorod. He dismissed worries about the drones’ potential vulnerabilities to hackers and cyberterrorists, the Moscow Times reported.

“The appearance of this class of drones, of course, requires a lot of responsibility because it is managed via software. It is clear that there are certain risks when in operation hackers can try to take control. But, talking with our engineers and designers, I came to the conclusion that there is massive protection against external interference,” Zhilin told the radio station.

With the deep-diving Poseidon drone, Russia will aim to counter any US missile defense systems and ensure deterrence with a second-strike capability.

The plan is to deploy 16 Poseidon drones on combat duty with the Northern Fleet.

Two special-purpose submarines, the Belgorod and the Khabarovsk, are to carry the weapons. Both submarines were built at the Sevmash yard in Severodvinsk, the Moscow Times reported.

Dmitry Gorenburg, a Russian military specialist at the Center for Naval Analyses in Washington, DC, said the Russians “want to highlight to US nuclear planners that ‘Hey, just because you think you’ll have the ability to take out all the ICBMs … we have other things’,” Gorenburg said.