Will Covid-19 End the Age of Mass Protests?

Global mass political protests reached a historic high at the end of 2019 but the Covid-19 pandemic virtually eliminated street protests that had, for a decade, increased globally at an annual rate of 11.5 percent, according to the Center for Strategic and International Studies in Washington. The CSIS reports in its article Will Covid-19 End the Age of Mass Protests? that while social distancing has doused the flames of tens of millions taking to the streets, the embers that ignited protests in 114 countries last year are still glowing hot.

There is strong reason to believe that once the health crisis ebbs, there will be a new surge of global protests—perhaps even greater in scale and political consequence. These protests could play a determining role in setting national and global agendas post-Covid-19. Or they could simply deepen the disorder now gripping the world.

The Covid-19 crisis and its growing economic fallout have further illuminated many of the core grievances that drove mass protests over the past decade. It is important to note that the global uptick in protests in the last 10 years appears in many cases to have been rooted in the 2008-2009 global financial crisis, which exacerbated lack of economic opportunity and dissatisfaction with governments. Foremost on protesters’ minds the world over has been lack of economic opportunity, perceptions of rising inequality, and corruption by elites. With social distancing and quarantine measures just beginning, divisions between workforces and households are being laid bare. In addition to uneven access to health care, concerns are growing about economic shocks leading to hunger and homelessness.

In the near term, there has been a rise of walkout-style protests by frontline pandemic responders, from health care workers in Colombia to grocery store and on-demand delivery drivers in the United States. Across Brazil, millions of protesters have already taken to banging pots and pans out the window of their homes to signal rising discontent with what they believe is inept handling of the response by President Bolsonaro, who has refused to institute social distancing measures and insisted people need simply to go to work. And across Africa, protests related to Covid-19 are beginning to flare over food prices and availability. As governments elsewhere in the world stumble in their health and economic responses, popular discontent will grow.

The Covid-19 crisis is also likely to accelerate the triggers of the protests of 2019: pushback against authoritarian governments. Hong Kong was hit early by Covid-19, and its protest movement—the beating heart of global movements and an inspiration to demonstrators in Chile, Spain, and elsewhere—moved online once it was no longer safe to be in the streets. Hong Kong protesters’ fury at their government seemed to increase over what they characterized as a clumsy and inadequate reaction to the health threat. Though Hong Kong now appears to be one of the first territories to successfully emerge from a first wave of the pandemic, a recent poll indicated that 70 percent of respondents credited the people of Hong Kong and not the government for the success. In online forums, protesters are now discussing when the time will be safe to go back on the streets and whether they should seek police permission before doing so—but they are steadfastly committed to regaining momentum. The question in Hong Kong is when, not if. 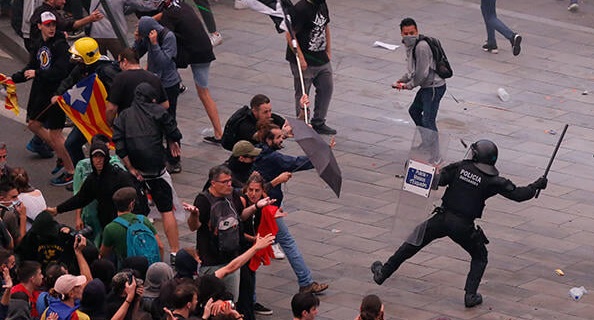 Another notable protest vector over the past several years has been climate action and the global environmental movement. Having scaled rapidly over the past two years to orchestrate transnational protests larger than any seen since the Iraq War, key groups in the movement, including Extinction Rebellion, the Sunrise Movement, and Fridays for Future (headed by Greta Thunberg), had major plans to increase protests this year ahead of the now-postponed UN Climate Change Conference (COP 26). Instead, they’ve had to regroup in a virtual setting. Stephen O’Hanlon, co-founder of the U.S.-based Sunrise Movement, recently said, “Our generation was built for this. We’ve spent our entire lives online.” Environmental protesters are watching closely how governments respond to Covid-19, including rapid and unprecedented changes to the economy and society—changes these same governments considered unachievable when posited by environmental protesters arguing that governments are responding too slowly to an existential threat. In a recent op-ed, an 18-year-old climate activist wrote, “My generation is giving up our youth—our schooling, our fun and our freedom—so that you can see next year. When this [Covid-19 crisis] is over, you may have to keep giving something up so that we can see the next century.” Global youth are at the center of the global protest movement across countries and issues and are indeed the first generation of digital natives, in some ways far more comfortable with social distancing than the rest of us and adept at the tools to build networks and exchange ideas.

But in the midst of the Covid-19 outbreak, many country governments are actively taking steps that could curtail individual citizens’ data privacy and civil liberties, including tracking phone data to help contain the virus. This will intensify what we described in our report as the offense-defense race between protesters and governments. Governments also have the ability in the midst of the pandemic to collect greater biometric data on citizens as they track health at the individual level. This could provide authoritarian regimes greater ability to control leaderless movements by continuing to strip away the relative anonymity and security that encrypted communications have granted them. It is also important to note that many governments in countries that experienced protests in 2019—Lebanon, Iraq, and Chile, among them—were quick to seize on the health emergency to ban public protests but slower to implement broader social distancing measures. And in one extreme example, Philippine President Rodrigo Duterte authorized a shoot-to-kill order for any would-be protesters, including those in slum areas taking to the streets amid food shortages.

The course of Covid-19 is uncertain, but it is clear the pandemic will put unprecedented strain on societies and governments. This will exacerbate existing tensions and create new ones, with continued protests around the world a certainty in coming months. Covid-19 is rewriting our history and challenging the relationship between citizens and their governments. It is important that U.S. policymakers actively support protest movements that seek to move the world in a more democratic, open, and transparent direction as they shelter and sustain themselves virtually and prepare for future action. In the midst of this domestic and global crisis, articulating democratic norms and values in support of the kind of world we hope reemerges from this crisis is more important than ever. Global technology companies also have a special responsibility to ensure that the tools they are creating are not abused by governments and politically extreme groups, upholding values that in turn nurture free markets and a return to economic growth.