Across Europe festivities and parades full of spirits and demons, dances and drinks bring cheer – and sometimes mayhem – to the winter months, The Guardian writes.

Venturing out after dark in Switzerland’s Lötschental valley in February can be a hair-raising experience. Between Candlemas and Shrove Tuesday the four high villages in this alpine region in canton Valais are roamed by nightmarish-looking figures known as the Tschäggättä. The fur-clad beasts – with fearsome expressions carved into oversize wooden masks and cow bells belted to their waists – might steal your woolly hat, push you to the ground and terrorise your children. But it’s all in the name of fun. A tradition in the area since the mid-19th century, but probably dating back far further, Tschäggättu culminates in a procession from Blatten to Ferden on the evening of 20 February, followed by an afternoon carnival parade in Wiler two days later. 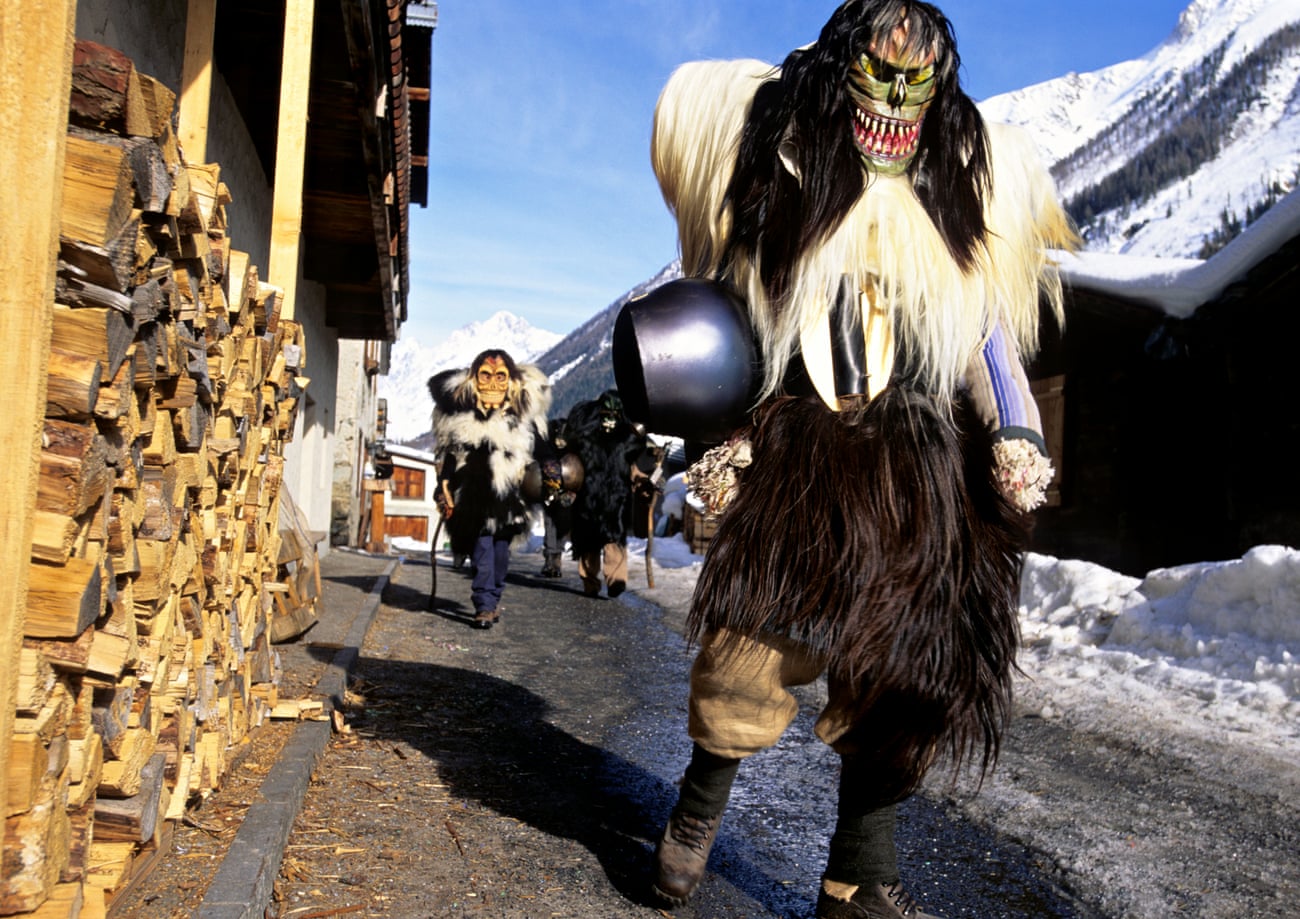 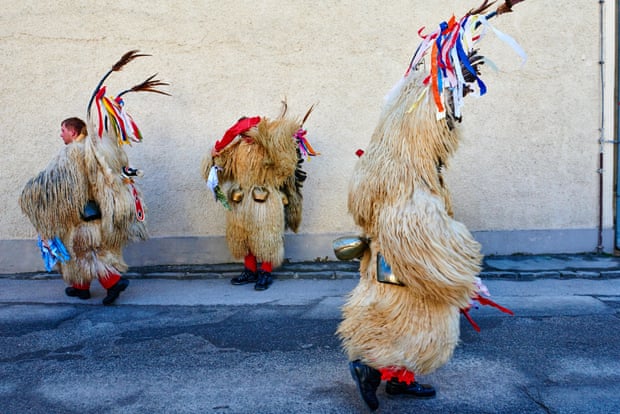 Whip cracks split the slate-cold February sky. You hear their echo before you see the whippers themselves: a gaggle of men dressed in 19th-century costume. They have puffy white shirtsleeves, embroidered vests and leather britches, their bullwhips are in hand but there is an incongruous abundance of brightly coloured flowers bedecking their hats. They are here to chase away winter, but they are not alone. They clear the path for a special sort of monster: a benevolent demon who strikes terror into the evil winter spirits and drives them away. Following them are villagers dressed as kurenti. Kurent is the protagonist of Slovenia’s oldest holiday, Kurentovanje. It is a holdover of ancient Slavic rites of spring, which were adapted into Christianity’s timeline, linking pagan spring rituals with Shrovetide and Lent.

The north-eastern town of Ptuj (puh-tooey) crowned by a castle and ringed with Roman ruins, hosts the most famous kurentovanje parade. The ritual looks primeval, tribal, eerie. The costume for kurenti involves a long-haired sheepskin suit that rises above the head into a fearsome, towering mask, decorated with bull horns, a wooden face, bristly moustache and lolling leather tongue. A belt of cowbells clangs as they dance, and they wield maces made of hedgehog spines. Then this monster parade leads to a street party involving homemade schnapps, mulled wine and giant doughnuts stuffed with apricot marmalade.

Stay: Muzikafe is a hostel that puts on live music, performances and workshops; double/twin from €47, room only. 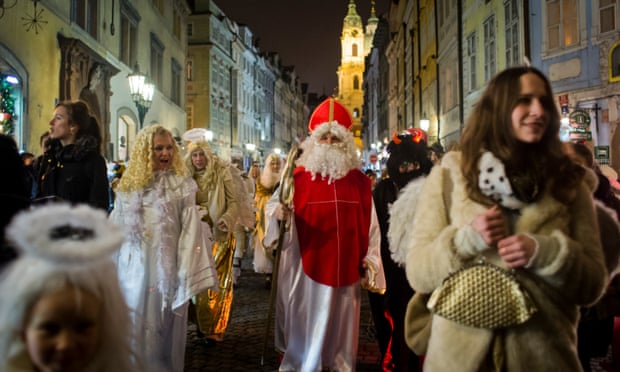 Being accosted by the devil, bundled into his sack, then carried away to hell doesn’t sound like the most child-friendly festival jape. But that’s what awaits mischievous Czech children on St Mikuláš Day. The festival is a celebration of St Nicholas, patron saint of children, lardily embodied as Father Christmas in most countries. Not so in the Czech Republic. With Ježíšek (baby Jesus) tasked with bringing the gifts on Christmas Day here, St Mikuláš gets his day of generosity on 5 December. Head to Prague’s Old Town Square around 4pm to see the action. A curious mix of Santa’s grotto and Halloween, the event sees Mikuláš, a tall, white-bearded figure, accompanied around the square by an angel and a devil. Children are quizzed as to whether they’ve been good or not, and after reciting a poem or singing a song are given sweets. If deemed naughty, however, the devil threatens to put them in his sack – often accessorised by fake kids’ legs sticking scarily out of the bottom. Grab a mulled wine or cup of grog and watch the laughter (and tears) unfold.

Stay: Close to the Old Town Square, Hotel Melantrich has doubles from €88 B&B. 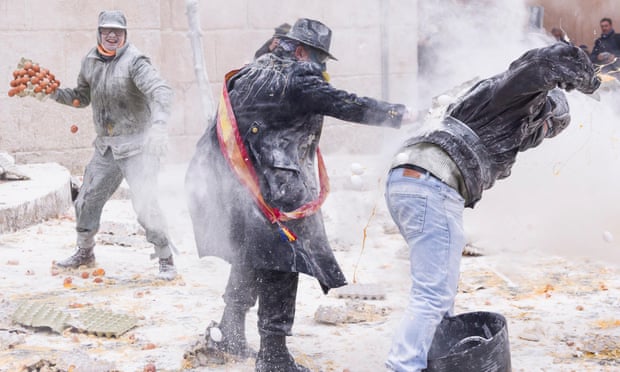 This riotous 200-year-old festival takes place on the Day of the Innocents – the Spanish equivalent of April Fools’ Day – and is a light-hearted dig at authority, though its precise origins have been forgotten. Early in the morning, a group of married men from the town – Els Enfarinats, “the floured ones” – stage a mock coup and set about imposing absurd new laws on the town’s inhabitants, demanding fines for disobedience. The townspeople resist and running battles ensue, with flour and eggs the weapons of choice, until a ceasefire is called for lunch. Fines and a revolutionary tax imposed on local businesses are donated to a local old people’s home, and the festival ends with a dance.

Stay: For a ringside seat, stay at Casa Rosalia in the town centre. It has doubles from €78 that can be reserved at booking.com. 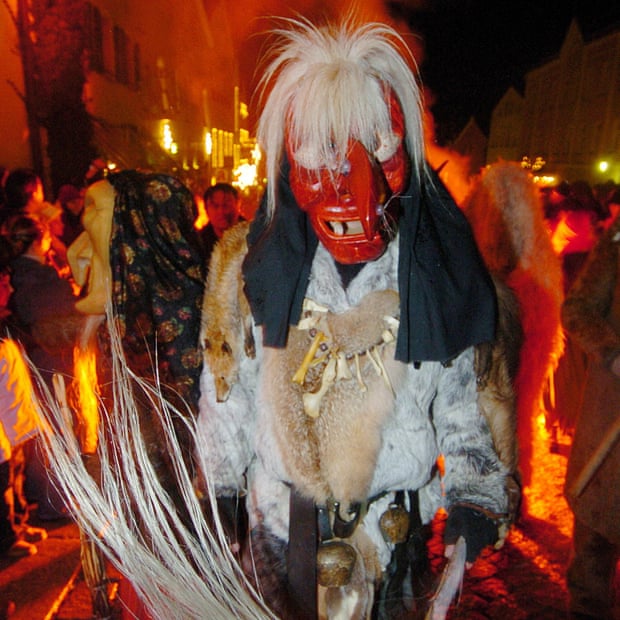 Southern Germans are used to flamboyant Christmas characters, not least the terrifying half-goat, half-demon Krampus, who appears on Bavarian streets on Krampusnacht (5 December). But in some places, most notably the village of Waldkirchen, Krampus is small fry compared with the pagan-style characters who come out for Rauhnacht. Locals dress in furs, capes, horns and frightening masks and run through the cobbled streets, groaning and screaming, and carrying blazing torches. They represent scary souls who have made a pact with the devil and are attempting redemption; they lead their followers, a mix of locals and visitors, to the city centre, where a straw doll representing evil is ritually burned. 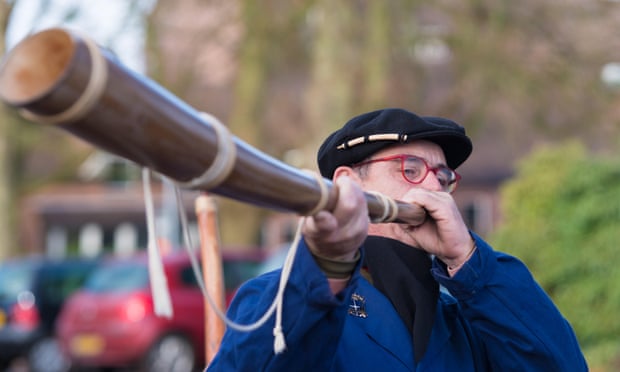 Blowing the midwinter horn is a December tradition in the rural east and north of the Netherlands. The wooden horn is similar to an alpine horn and produces a low, melancholy sound. Some historians say it used to be a pagan tradition to scare evil spirits away during the dark winter months, though the horn was also used as a means of communication between farmers – and to warn smugglers of the police. Midwinter horn demonstrations are given in many villages between the first Sunday of Advent and Epiphany (6 January). Every year hornblowers, dressed like farmers in blue smocks with clogs, play at various spots in the countryside and walkers are offered mulled wine or hot chocolate. For example, on 15 December there is a midwinter hornwalk in Oud Avereest, a village in the province of Overijssel, starting from 10.30am at visitor’s centre De Wheem.

Stay: De Zilveren Maan (doubles from €105) is a farmhouse B&B in the village of Balkbrug, close to Oud Avereest. 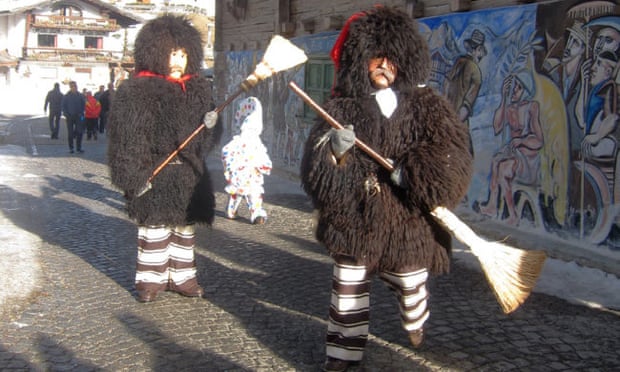 The sleepy alpine village of Sappada abruptly awakens every winter for its raucous carnival, spread across the three Sundays leading up to Lent. The festival is led by the Rollate. Resembling a cross between man and bear, they wear hooded black pelts, stripey trousers, wooden masks and heavy bells. Their origins are something of a mystery. Initially, they were used to scare children away from the carnival - historically reserved for adults. These days, their main function is to steer along the festivities, which consist of locals dressed as peasants, paupers and aristocrats – a nod to the village’s social history. Festival dates for 2020.

Stay: Hotel Posta (doubles from €74) offers traditional Alpine bed and breakfast in the centre of Sappada. 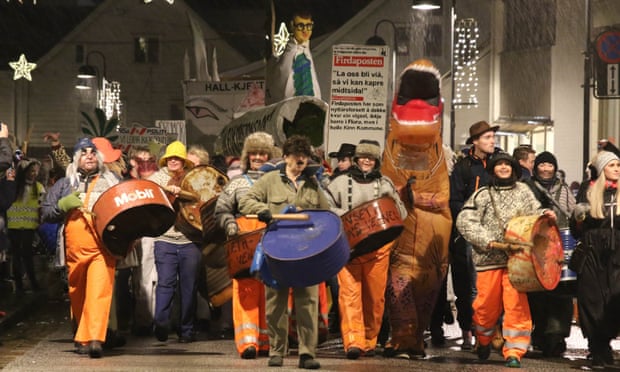 Kjippen is an odd carnival in Florø, the most westerly town in Norway. It happens every New Year’s Eve and starts, precisely, at midnight. Locals go to great lengths in dressing up for the parade along cobbled streets lined with traditional wooden houses. Participants share satirical commentary on current (local) affairs through their costumes and amplify their messages with floats, street theatre and posters. To be the target of caricature is, however, considered an honour. Live bands and hundreds of spectators add to the atmosphere. At the end of the carnival, all floats and posters end up on a big bonfire, disturbingly close to a petrol station. The tradition goes back to the 1800s in central Europe, where craftsmen in costumes created mayhem (or kjipp) in the streets to protest at low wages. Kjippen has been celebrated since 1900.

The Burning of the Clavie, 11 January 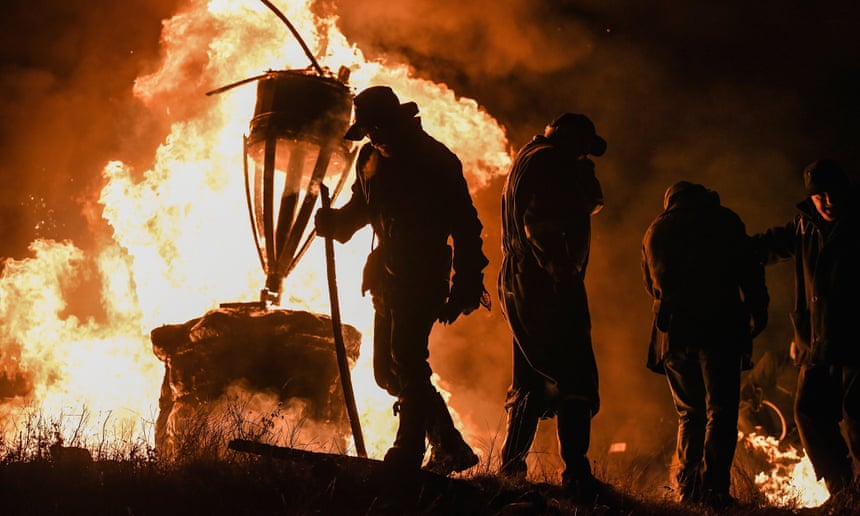 Scotland’s fire festivals help bring cheer to dark winter nights, from the torchlight processions and fireworks at Hogmanay to the Viking-themed Up Helly Aa in Shetland. One lesser-known event is the Burning of the Clavie in Burghead, a small town in Moray. The celebration has its roots in pagan rituals and is still going strong despite a 1714 law that outlawed it as “superstitious, idolatrous and sinfule, an abominable heathenish practice”. It takes place on 11 January, New Year’s Eve according to the old Julian calendar, so residents celebrate Hogmanay twice. The “Clavie Crew” carry a flaming barrel full of staves around the town and up Doorie Hill, where it burns for hours. Onlookers collect glowing pieces to light their first fire of the (old) new year, or send to loved ones for luck. Then, in another great British tradition, everyone goes to the pub .

Stay: The Moraybank B&B (doubles from £85) in nearby Elgin is a fine 1845 property with lots of period features. 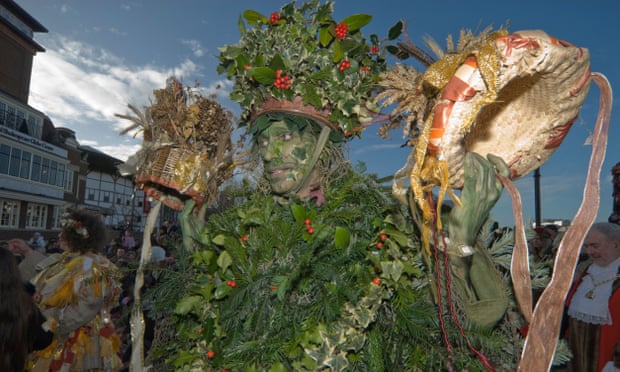 One of the biggest Twelfth Night celebrations in the UK takes place on 5 January at Bankside in London, a chance to bid farewell to Christmas and toast the new year. Although the event itself is relatively new – 2020 will be the 25th anniversary – it brings together ancient midwinter customs. The Holly Man (the winter incarnation of the Green Man) arrives over the Millennium Bridge, accompanied by wassailers and mummers who perform a play about St George. Cakes are given out and the pair who find a concealed pea and bean are crowned king and queen. The procession continues through Borough Market to the 17th-century George Inn for more singing, dancing, storytelling and a wishing tree – plus plenty of mulled wine and cider.

Stay: CitizenM Bankside (doubles from £119) is a stone’s throw from the action.