2,500 rare texts from Islamic world to go online for free

More than 2,500 rare manuscripts and books from the Islamic world covering a period of more than a thousand years are to be made freely available online, The Guardian writes in the article 2,500 rare texts from Islamic world to go online for free. The National Library of Israel (NLI) in Jerusalem is digitising its world-class collection of items in Arabic, Persian, and Turkish, dating from the ninth to the 20th centuries, including spectacularly beautiful Qur’ans and literary works decorated with gold leaf and lapis lazuli.

The NLI’s treasures include an exquisite Iranian copy of Gift to the Noble (Tuhfat al-Ahrar), created barely three years after the completion of a 1484 collection of verse on religious and moral themes by the great Persian mystical poet Nur al-Din Jami. Each page is illuminated in gold leaf, with illustrations that include a polo game and a garden scene featuring beautiful medieval calligraphy. Dr Raquel Ukeles, curator of the NLI’s Islam and Middle East collection, said: “It’s exquisite. Each border is decorated in gold leaf [and] very delicate paintings. Every page is different. You’ll have pictures of gazelles, flowers or plants.” The opening and closing pages feature “mouth-wateringly beautiful” double-sided miniatures that were added later, apparently in the 17th or 18th centuries, but in the 15th-century style. Such manuscripts are too delicate to be put on permanent display, Ukeles added. “What’s wonderful about digitisation is that you can get in very close. Only through digitisation have we noticed unique and distinctive details. Even with a magnifying glass, you wouldn’t be able to get there.” 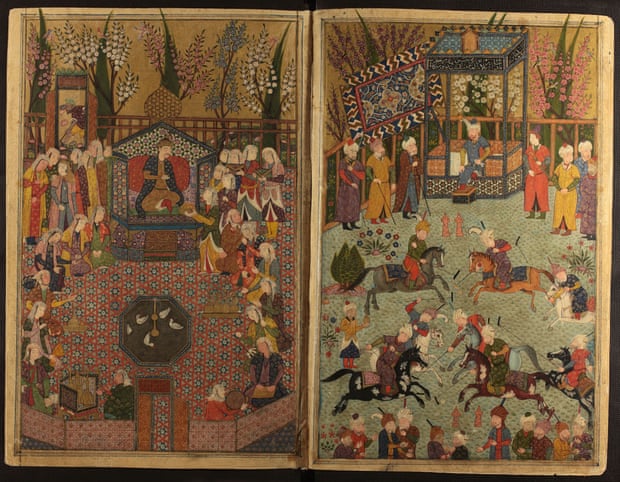 Among the extraordinary treasures are a miniature 10th-century Qur’an, just 37 by 68 mm. “It’s tiny,” Ukeles said. “It was not for study, but rather for religious protection as an amulet.” The Qur’an was carried into battle by an Ottoman soldier in the siege of Vienna, 1529, but did not bring good fortune and was taken by the Austrian army when the Ottomans retreated, before being returned to the Ottomans in the 19th century.

Most of the manuscripts were bequeathed by Abraham Shalom Yahuda, a Jerusalem-born Arab-Jewish scholar and one of the most important Islamic manuscript collectors of the early 20th century, who died in 1951. An NLI spokesman said the project would not have happened without a “generous grant” from the British-based Arcadia fund. Founded by Lisbet Rausing and Peter Baldwin, Arcadia supports charities and scholarly institutions to preserve cultural heritage, protect the environment, and promote open access. Ukeles said: “For us, it’s very much about opening up access across borders. Of course, we’re in a highly contentious region, where we don’t have easy access or easy communication with our neighbours. But through the Islam collection, it’s always been a goal of ours to create a space, whether it’s physically in a building or digitally where people can come together, study their own and other cultures and expand their horizons, irrespective of what’s going on at the political level.”