While most people take washers and refrigerators for granted today, a century ago, these machines revolutionized people’s daily lives. The introduction of running water and electricity set the stage for sweeping social and cultural changes by making possible labor-saving devices to tackle routine household chores. History tells how six game-changing household inventions came into being.

In the early 20th century, food poisoning was on the rise in the U.S. Food was traveling further from farms to stores and homes, and more of it was being contaminated, causing everything from botulism to typhoid. Throughout the 19th century, reducing food spoilage involved harvesting and storing blocks of ice that were used in everything from shipping containers to household “ice boxes.” But ice consumption had reached unsustainable levels, and the sources of that ice were increasingly polluted by industry. Engineers found ways to use compressed gasses as artificial refrigerants on a commercial scale, but it was Alfred Mellowes in Fort Wayne, Indiana, who devised the first compact refrigerator in 1915 for home use. William Durant, then-president of General Motors, bought the fledgling company, which had been struggling to keep up with orders. His team refined the design and began assembling the new Frigidaire on an assembly line in Detroit. 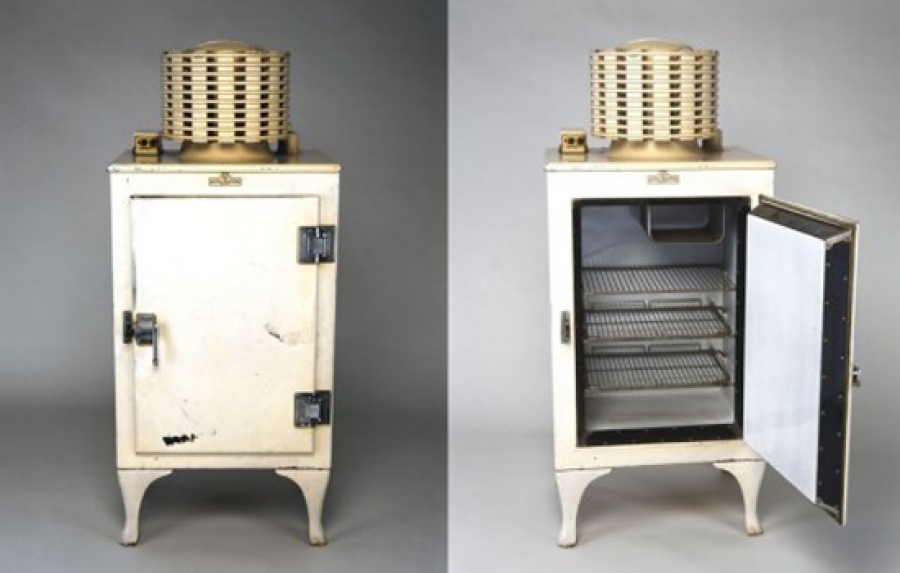 Fed up with devoting hours to hand-washing her family’s fine china after dinner parties, Josephine Cochran (sometimes known as Cochrane) invented the first commercially successful dishwasher. “If no one else is going to invent (it), I’ll do it myself,” resolved the recent widow. She received her first patent for her device—which relied on water pressure rather than on scrubbers—in 1886, after using her initials rather than her full name on the application to disguise her gender. Cochran turned to mechanic George Butters for help building a prototype in a shed adjoining her family home, in Shelbyville, Illinois. In 1893, the Garis-Cochran dish washing machine won an award at the World’s Fair in Chicago, with judges praising it for “the best mechanical construction, durability and adaptation to its line of work.” By 1898, Cochran had opened her own factory; with models costing upward of $300, most clients were hotels and restaurants. In the 1920s, ads described the devices as “the electric dishwasher for fine homes” that would allow affluent households “to keep the best class of servants.” But price kept them out of reach for most American families until after World War II. 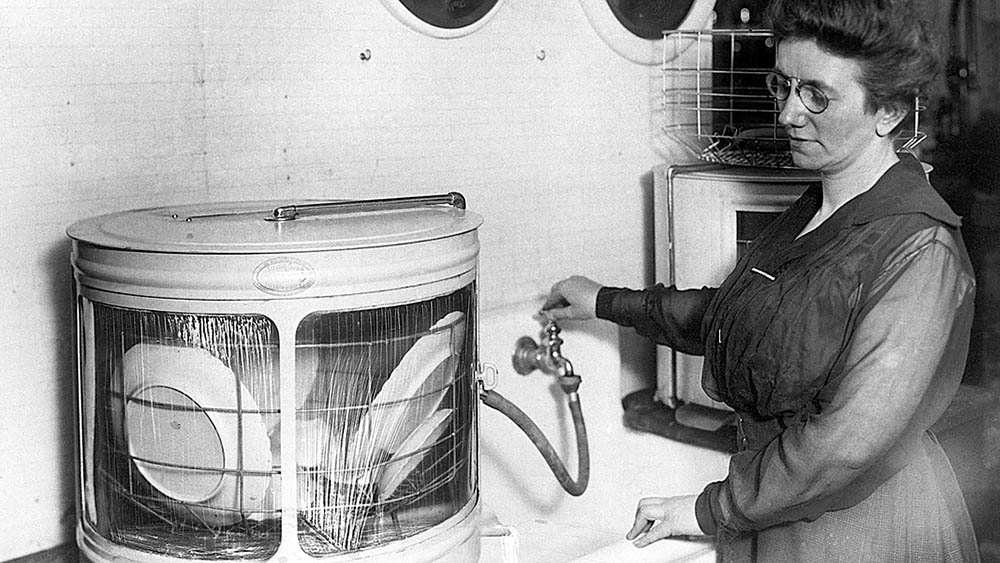 At the dawn of the 20th century, most women could expect to devote an entire day to washing (and drying) their families’ clothes by hand, using big pots of boiling water and a scrub board. A lucky woman might own a wringer, operated with a hand crank, to remove excess water before hanging clothes on a line to dry. But getting through an entire load usually entailed hours of intensive labor. Then came Frederick Maytag, a partner in a farm equipment business. In 1907, he was looking for new products to sell that would help the company ride out agriculture’s big cyclical swings. Maytag devised a hand-cranked washing machine, designed to lighten farm wives’ burden. By 1911, he had found a way to use either electricity or gasoline to power the new invention. The “Gyrofoam,” the first washing machine to use an agitator to clean the clothes in an aluminum tub, debuted in 1922. The modern clothes dryer (an appliance powered by electricity rather than a ventilation device that relied on open fires to dry clothes) arrived soon after. 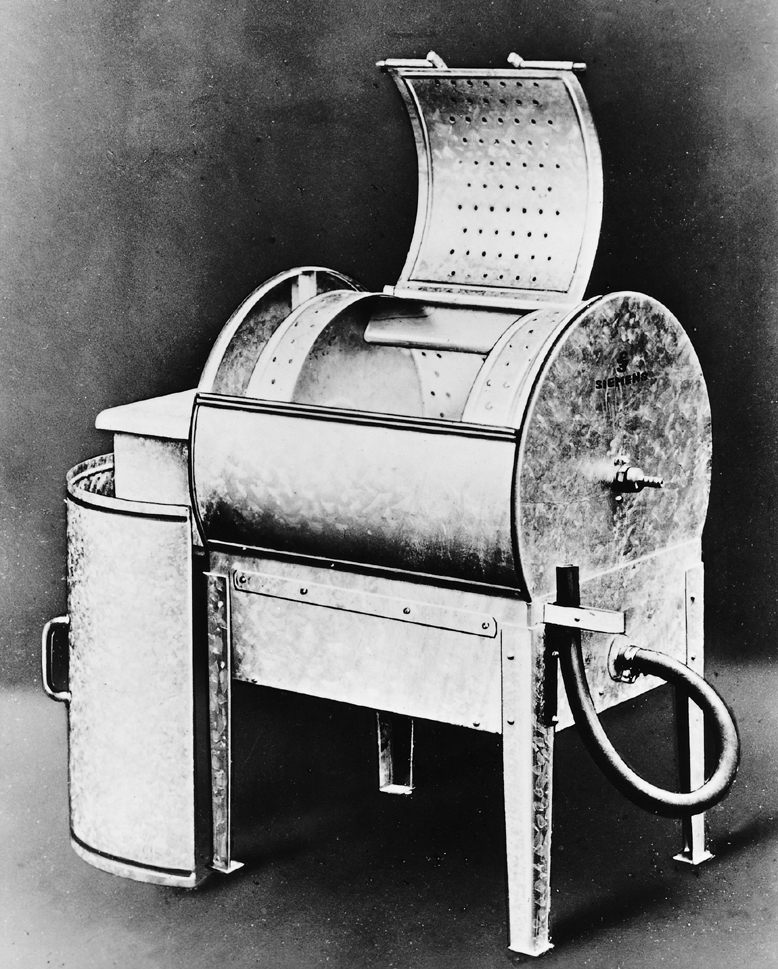 Brooms and carpet-beaters just didn’t get the job done. “The accumulation of dust and dirt in dwelling-houses in a source of great annoyance to all good housekeepers,” wrote Ives McGaffey in his 1869 patent application for a carpet sweeper that relied on a hand-operated crank to create suction. Next-generation vacuums were designed to run on gasoline, and were so large that many were pulled down the street by horse-drawn carriages; one called “Puffing Billy” even cleaned Westminster Abbey ahead of the coronation of Edward VII in 1911. The modern vacuum cleaner, which used electricity-driven suction, was the brainchild of Ohio department store janitor James Murray Spangler, who turned to ordinary household items (using a pillowcase as the first vacuum bag) to design an efficient machine. When Spangler’s cousin and her husband, Susan and William Hoover, bought the patent from the cash-strapped inventor in 1908, a household appliance brand name was born. 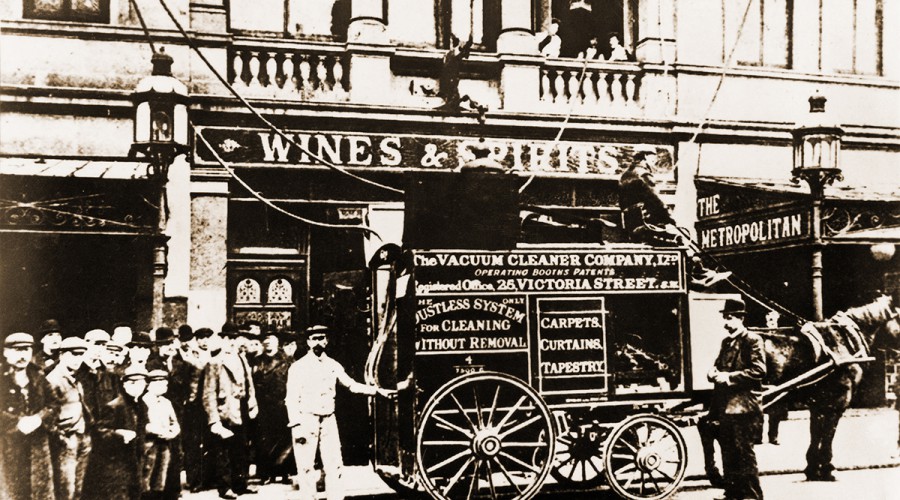 The arduous chore of heating and reheating heavy irons on a stove or over a fire to smooth out wrinkled clothes could take even more time than washing them. No wonder, then, that myriad inventors scrambled to devise a more efficient—and less sweaty—way, using electricity. Henry W. Seely of New York filed the first patent for an electric iron in 1882; within a decade, new innovations made it possible for the users to control the heat level and largely eliminate unsightly scorch marks. Black dressmaker and inventor Sarah Boone found a way to make the new invention even more handy, devising the prototype for today’s ironing board and becoming, in 1892, one of the first Black women to obtain a patent. 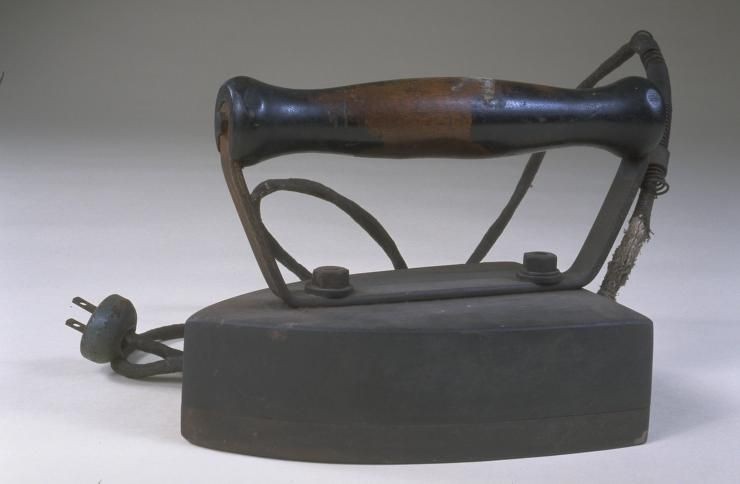 Anyone who has tried to knead bread or whisk egg whites by hand knows how taxing these tasks can be, and how much time and effort can be saved by using an electric mixer. Little wonder, then, that myriad inventive minds set about finding some kind of solution to this drudgery beginning nearly two centuries ago. Hand-operated egg beaters could speed up the process of, say, blending sugar, milk and egg white to create icing for a cake, and Black inventor Willie Johnson took it a step further in 1884 by designing a device powered by an arrangement of gears, pulleys and beaters. Home electrification made possible Rufus M. Eastman’s pioneering electric mixer. By early in the 20th century, the standing mixer had become one of the most popular household innovations; the wives of executives at KitchenAid gave their husbands’ appliances trial runs in their own homes and raved about them. In the 1930s, movie star Ginger Rogers was spotted lining up to obtain one of the must-have gizmos. 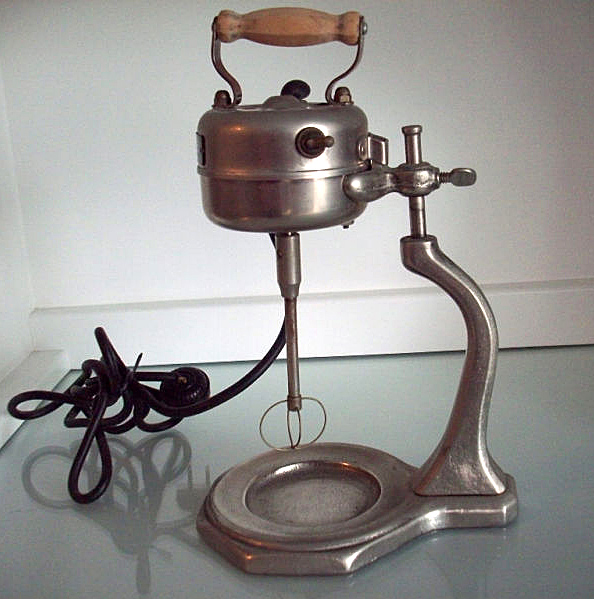