Abandoned in the Caucasus

Lana Sator and Arseniy Kotov travel across Russia in search of abandoned places. Their blogs dedicated to industrial tourism and Soviet architecture have already attracted an impressive audience. The two recently traveled to the North Caucasus in search of hidden gems in the region. They shared their findings, which included hotels, a dam, and a whole village, with RFE/RL in the article Abandoned In The Caucasus: Empty Hotels, 'A Witch's Hut,' And A Destroyed Dam.

Arseniy: Gamsutl is a large abandoned village in the mountains of Daghestan, about four hours' drive from Makhachkala and perhaps the most incredible place in the Caucasus I've been to. It is a place from a completely different culture, a different civilization. Before the arrival of the Russian Empire, Daghestan had its own construction methods. The layout of the cities was completely different, with difficult mountainous terrain, winding streets, and very chaotic buildings. Until the 1980s, the Avars, one of the peoples of Daghestan, lived in this village. In the 2000s, fewer than 20 residents remained. The last of them died about five years ago. When I first arrived there, he was no longer alive. Many things remained in the village. The houses still have beds, wardrobes, bedside tables, even dishes. But with each year, Gamsutl is falling apart. Photographs of the village 10 years ago and earlier show the walls of buildings were noticeably higher. Perhaps only ruins will remain soon. 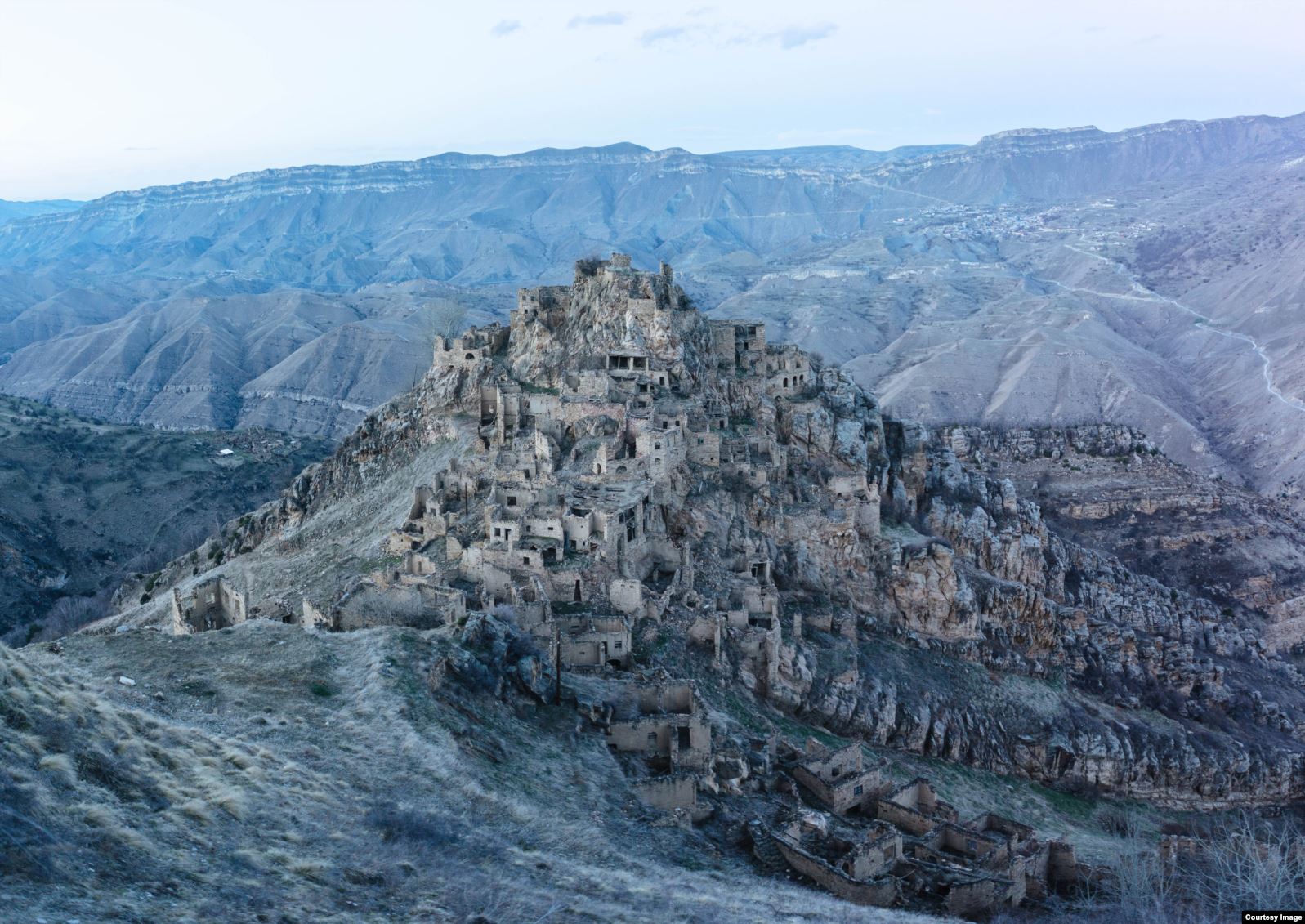 Lana: We came across this hotel by chance when we were searching for another abandoned place. We saw that there were no windows in the building, and we were also attracted by a huge neon sign on the roof: "Hotel Kavkaz." We got into the hotel without any difficulty through the second floor. We went up the stairs. What's interesting is that above the fourth floor, the hotel was clearly abandoned a long time ago. Almost nothing is left there, only some furniture, a floor, and doors. But on the lower floors, almost all the furnishings are in place and even the lights can be turned on. On the third floor we met a huge dog. Maybe this dog is guarding the property, but in reality it just calmly sits on an armchair, yawns, and eats. Someone brings it food. It has bowls with water and some food. The hotel has 16 floors and a staircase leads to the roof. By the way, it seems to me that this is the highest roof in Kislovodsk. The view is great. 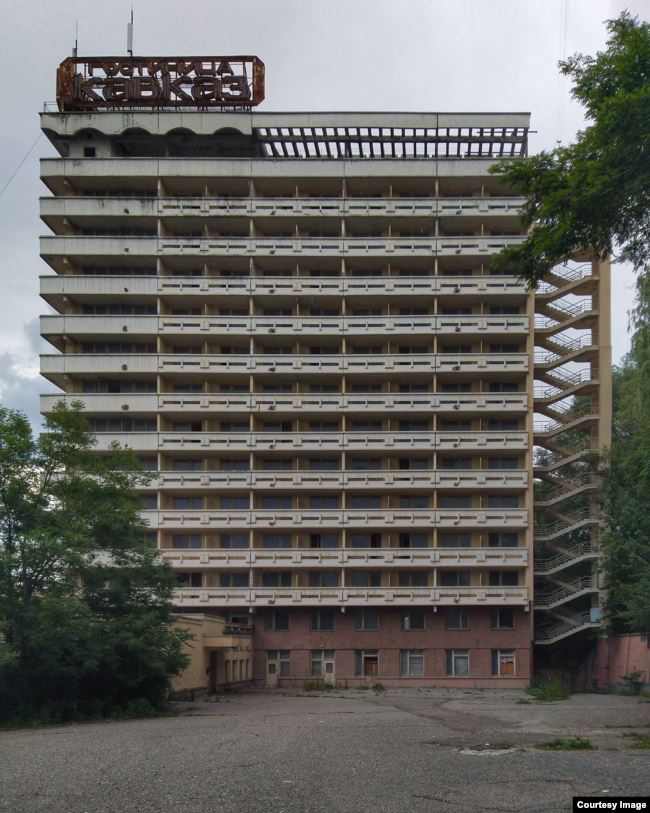 Arseniy: I called this rickety hut "a witch hut". It looks very surreal and gloomy among the mountains. Although, of course, there are no witches there. It is just an old weather station located on the slope of Elbrus, about 200 meters from the Mt. Terskol Observatory. It is unknown when it stopped functioning but presumably it worked until the 1980s. I've been there twice. The last time, two years ago. I even stayed there overnight. Nothing remained inside: only wooden floors and a ruined stove. There is also a staircase leading to the third floor. But you can climb it only at your own risk -- it is very poorly preserved. Tourists know this place very well. When people come to the Elbrus region, they acclimatize and to do so, they go on hikes in the mountains. The trail to the observatory is one of the most popular ones. The distance is short, but it is difficult to climb because of the big height difference. It takes four hours to get there from Terskol village. 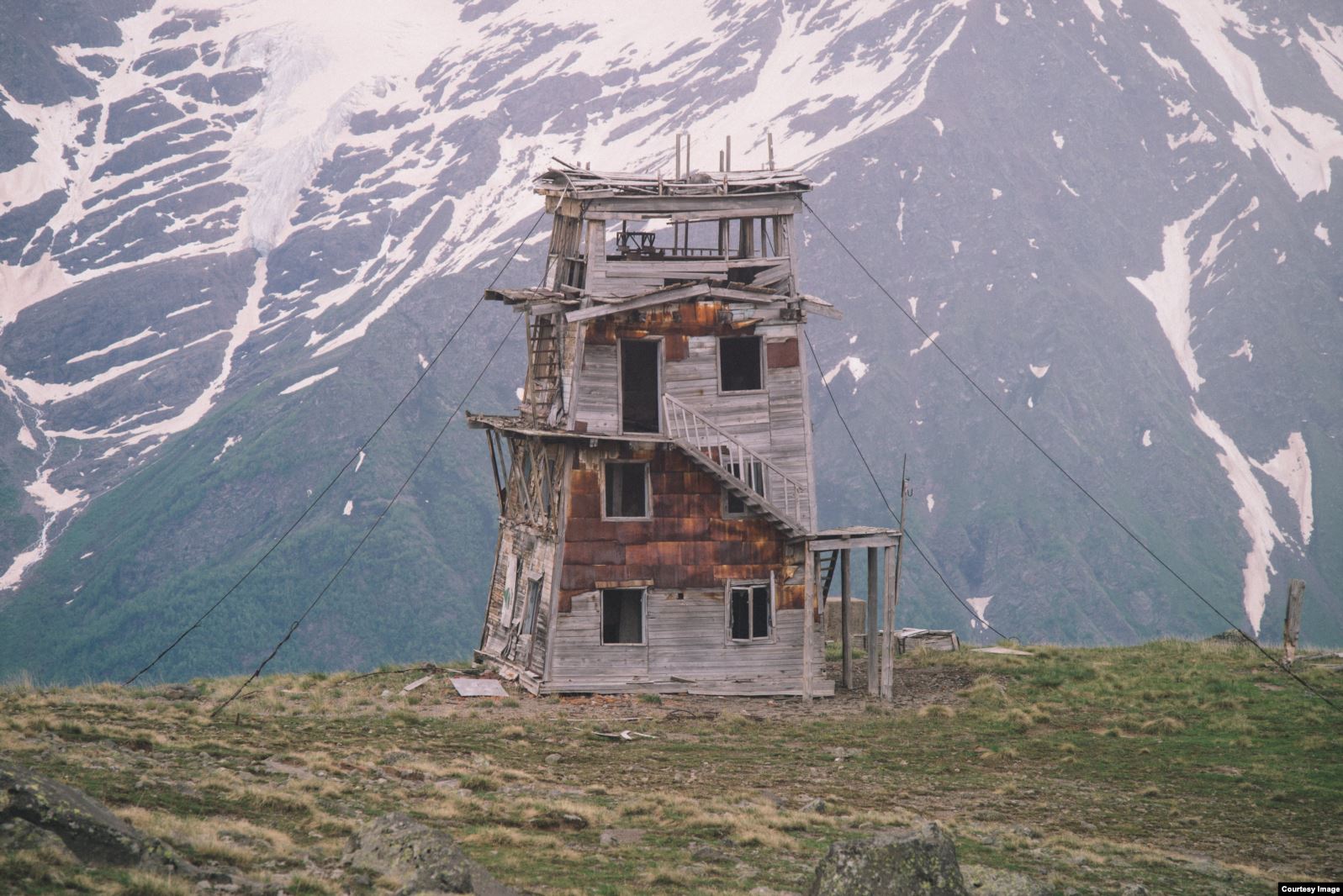 Lana: This is a huge sanatorium located in the central park of Kislovodsk right on the mountain top. It has a very strange shape -- it resembles the [Russian] letter Ж. The sanatorium is not functional but there are plans to reconstruct it. It seems that the local authorities have already agreed on something like that. It is very old, it was built in the 1930s. There are wooden floors. Part of the building is in a very bad state. There were fires and the roof collapsed in one wing. In the other wing, on the contrary, everything looks better. The baths have been preserved, the furnishings, and even the stucco molding in the concert hall. It is not easy to get into it. Due to the upcoming renovation it is surrounded by an iron fence. But it is possible to climb this fence over a tree, for example. And entering the building itself is no longer a problem. There are no windows or doors. 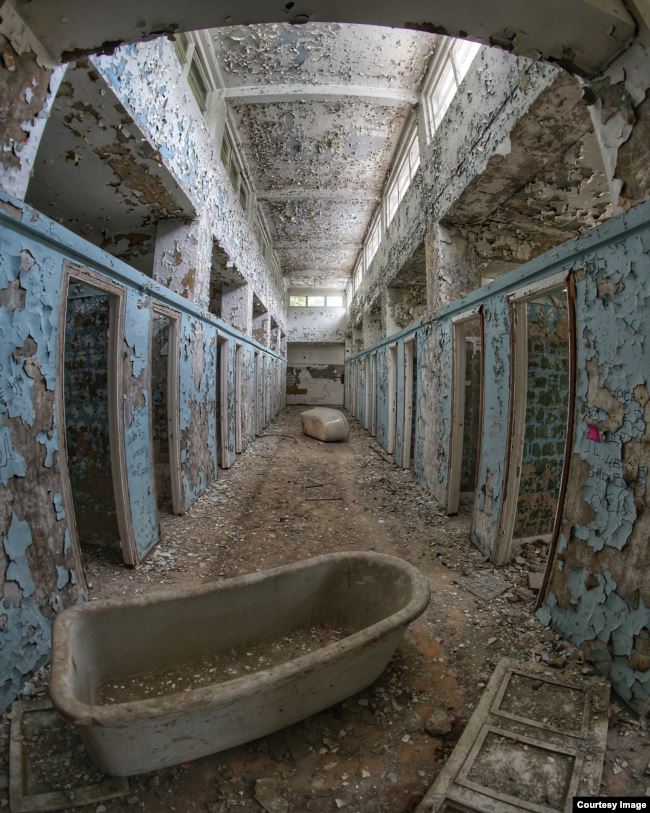 Arseniy: Tyrnyauz, which is a mining town, is one of the most interesting places for industrial tourism in the Caucasus. It started developing in the late 1930s, when a deposit of tungsten and molybdenum was discovered in the gorge. Then factories and houses for workers were built. In the 1990s, the city's population fell sharply. As a free market sprung up, tungsten and molybdenum became an unclaimed resource in Russia, as it was purchased abroad at low prices. So Tyrnyauz gradually turned into a ghost town. There are a lot of unfinished houses. It's a gigantic plant and the mines are all abandoned and nothing works. The concrete mudflow dam, located 40 minutes' walk up the gorge from the city, looks very apocalyptic. In 2000, it was destroyed by a powerful mudflow. But two pillared constructions on the sides of the river still remained. They are very tall and impressive, though the place is still considered dangerous among the locals. 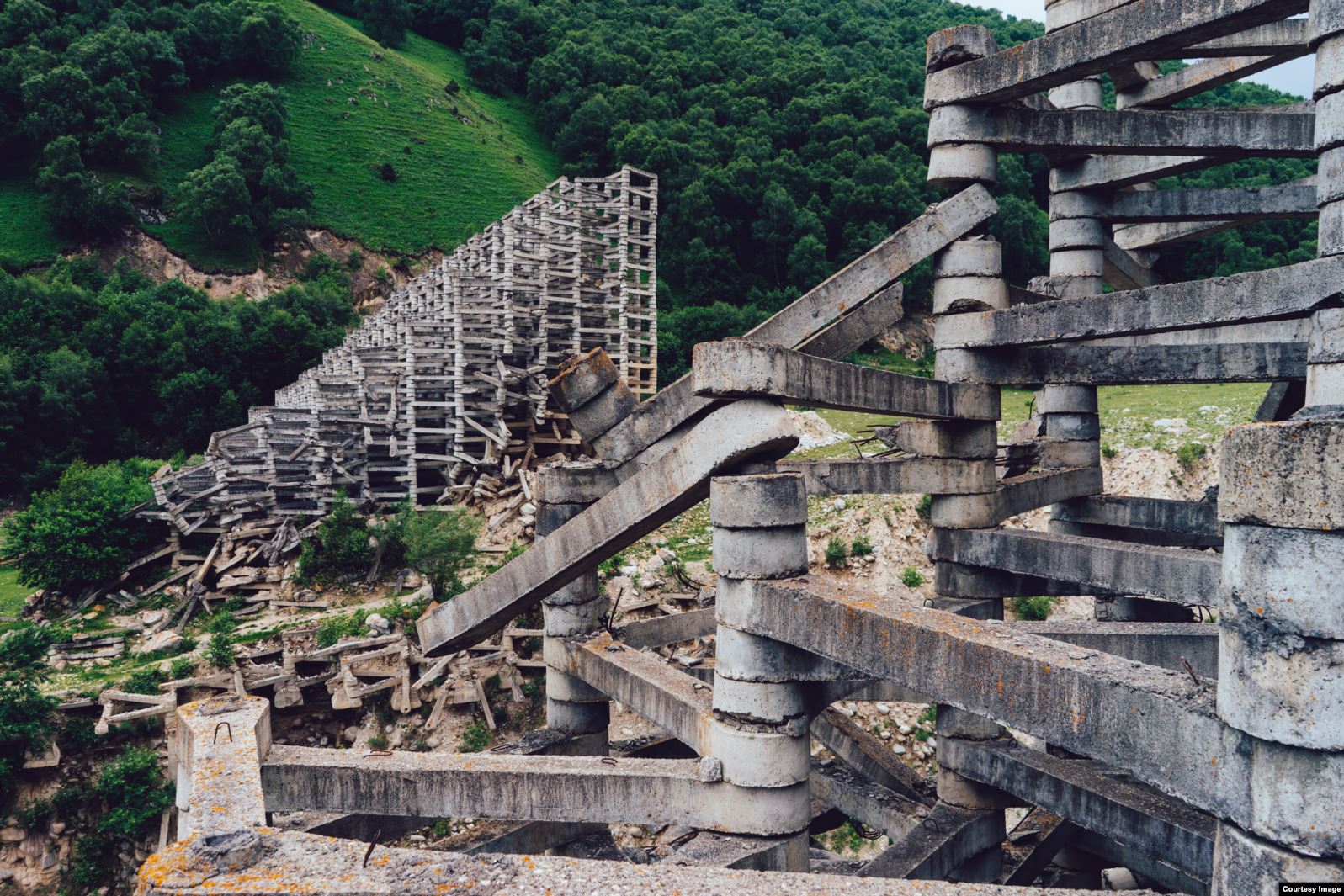 Arseniy: This is the tallest building in the Dombai village. It's very unusual in terms of architecture. It is guarded, but you can still get inside if you wish. This is generally a peculiarity of the Caucasus. You can almost always negotiate with a security guard. No interior furnishings have been preserved in the hotel. I'm not sure if they were ever there. The construction of the Amanauz Hotel was frozen at the final stage. They say that the foundation cracked or something like that.A hall with a spiral staircase has been preserved downstairs. The hotel rooms are small, not more than 10 square meters. But every room has an absolutely beautiful balcony overlooking the Dombai gorges. 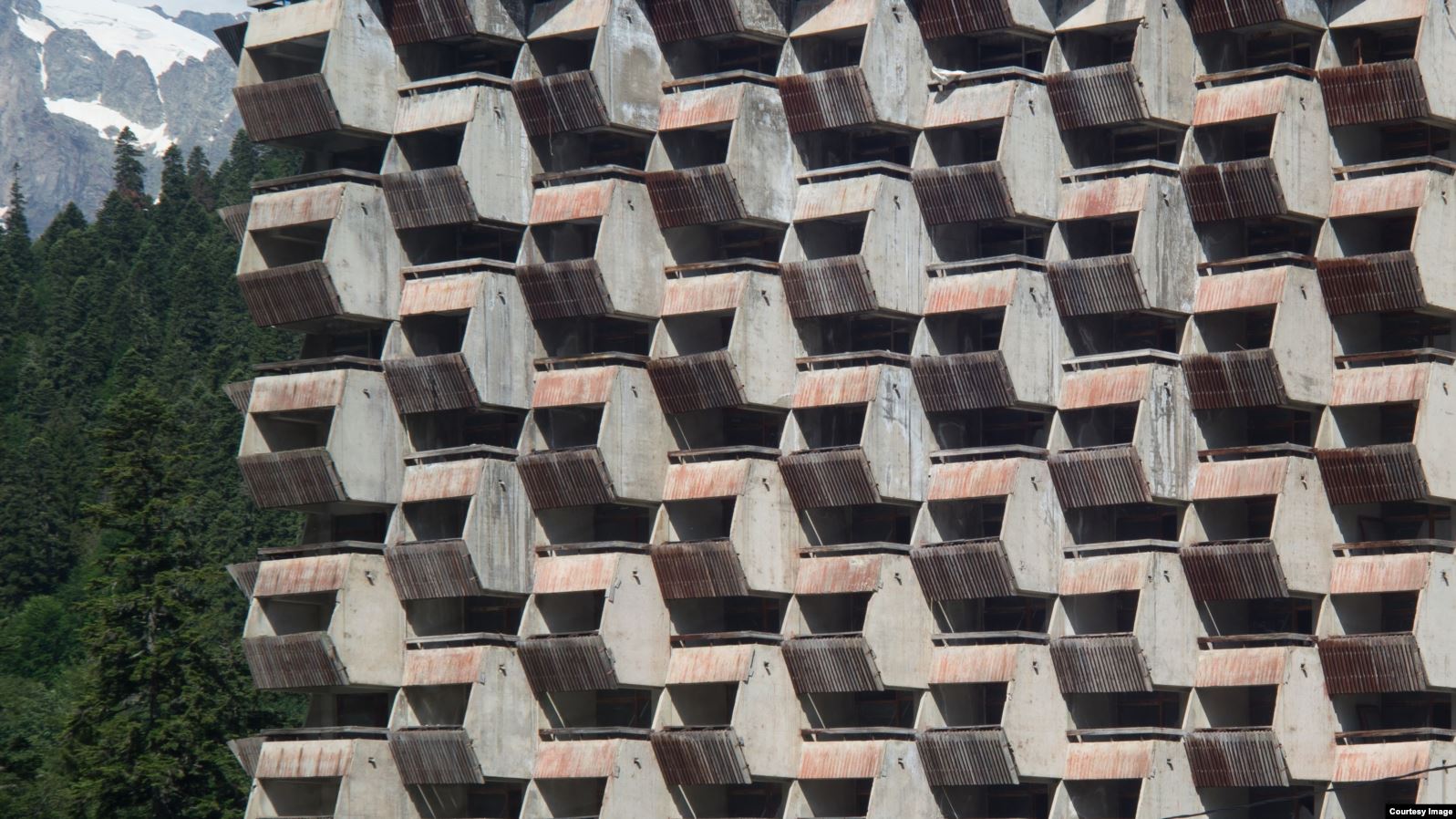 Lana: This is a well-known place in Nalchik. It is located in the area with the gloomy name "Wolf's Gate." But the camp itself is very cool and cozy. It was closed relatively recently, just eight years ago. It was built under the U.S.S.R. for the children of employees of the housing and communal services. Now it is guarded by a very kind old man who allows you to walk around the territory, but asks you not to go inside the buildings. However, it is not necessary to enter the buildings. Everything is visible from the outside -- beautiful paintings on the walls, posters about pioneers, sculptures in the garden, a piano, an old stage. The surroundings have been preserved very well. The camp has a very cozy area overgrown with lianas, which makes it a nice place for a walk. 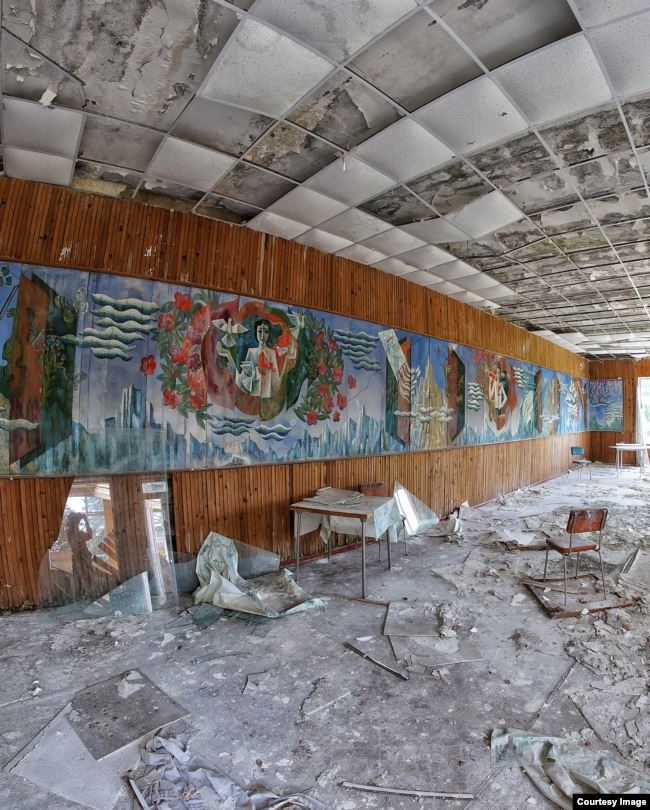 Lana: This plant once produced cathode-ray tubes, picture tubes for TVs and radio equipment. It was a famous and very successful enterprise in the Soviet Union. I don't know what is the future of this building. Maybe it will be demolished. The plant takes up a large area in the industrial area of Nalchik. The access is easy. There are no windows in the factory, you can easily climb through. The sign on the gate, however, says, "Security, no entry." But we met nobody. Its workshops are hefty, empty, and very cool. It’s just a plant, but even there you can feel that you are in the Caucasus. In each workshop there are old Soviet pictures with mountains. The territory is pretty overgrown. In Moscow, in abandoned houses, perhaps only apple trees can grow, but here cherry, plum, and mulberry is everywhere. You walk around and eat it all. 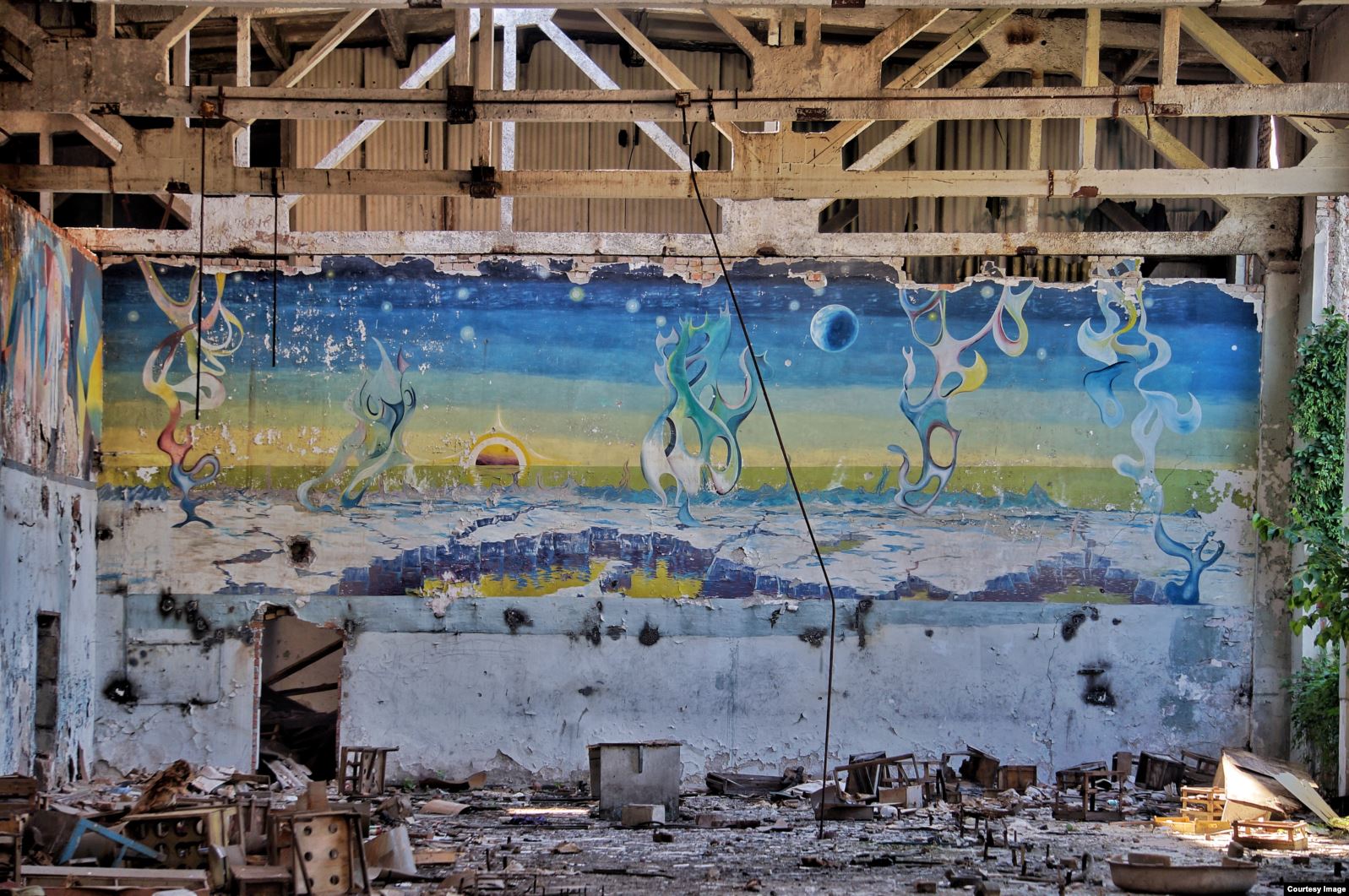 Lana: It is difficult to get into this cinema. It is all closed and boarded up. We walked around and never found any way in. But this was not that necessary. Kristall is incredibly beautiful from the outside. This is a typical Soviet cinema, but outside it is completely covered with metal panels and is very, very shiny. I do not know for how long it has been closed, maybe 10 years or more. I can say that when the film Night Watch [a Russian thriller directed by Timur Bekmambetov released in 2004] came out, it was still working. In the basement, we found posters of this film and also one for some French movie. 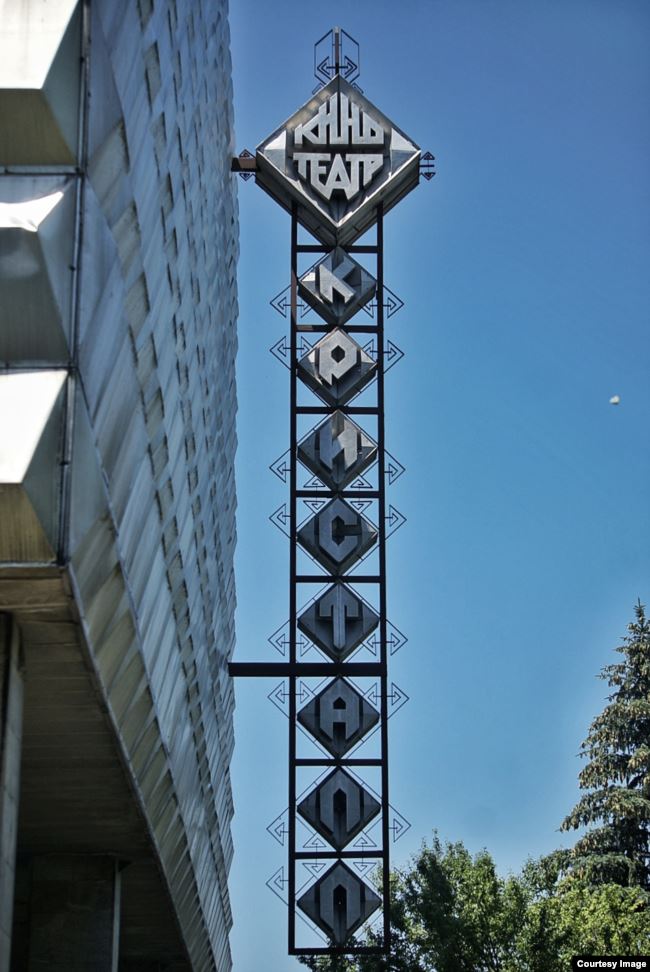 Lana: Karmadon, first of all, has a great location in the lowlands. If you do not know exactly where it is located, you can easily miss it. All rooms face the mountains in different directions -- one way, to the glacier. Probably, the one that slid into the Karmadon Gorge in 2002 (the Kolka–Karmadon rock-ice slide) when many people died (including a famous Russian actor and his film crew. Twenty-seven people died in total). This building, presumably built in the late 1980s in the style of Soviet modernism, is finished with a shell rock, marble outside, and all sorts of beautiful bas-reliefs and mosaics inside. At the same time, the building looks badly plundered. There are not even batteries and pipes remaining. It's easy to get inside. There are no guards nor a fence. Surprisingly, cows use this place to hide from the heat. There were about five of them, no less. They have amazingly mastered stair climbing and they walk up to the seventh floor. 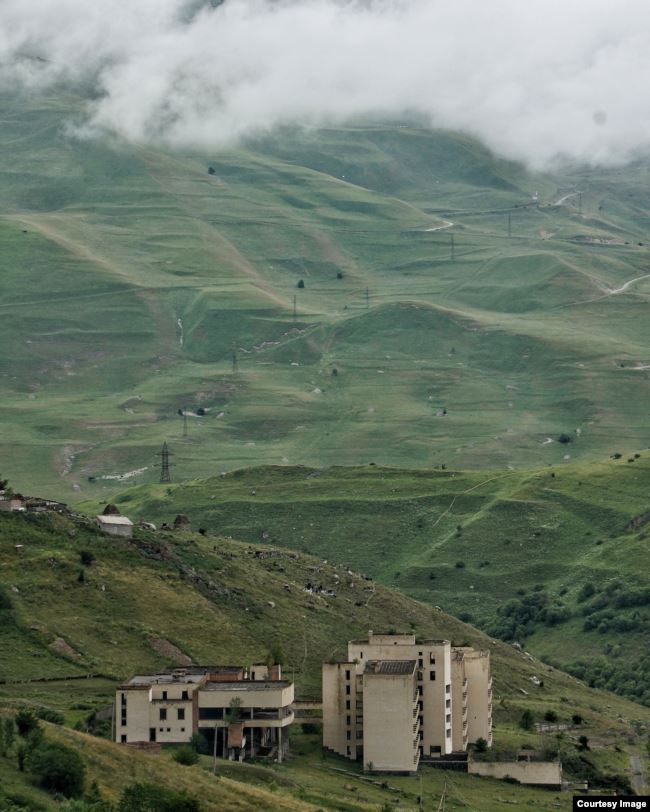