On the night of December 2, 1943, the Germans bombed a key Allied port in Bari, Italy, sinking 17 ships and killing more than 1,000 American and British servicemen and hundreds of civilians. Caught in the surprise World War II air raid was the John Harvey, an American Liberty ship carrying a secret cargo of 2,000 mustard bombs to be used in retaliation if Hitler resorted to gas warfare.

The Luftwaffe’s lucky strike, which released a poisonous cloud of sulfur mustard vapor over the harbor—and liquid mustard into the water—prompted an Allied cover-up of the chemical weapons disaster. But it also led to an army doctor’s serendipitous discovery of a new treatment for cancer.  Eisenhower and Churchill Coordinated an Immediate Cover-up, Thwarting Victims’ Treatment

In the devastating aftermath of the attack, which the press dubbed a “little Pearl Harbor,” U.S. General Dwight D. Eisenhower and British Prime Minister Winston Churchill moved to conceal the truth about the shipment of poison gas, for fear Germany might use it as an excuse to launch an all-out chemical war. As a result of the military secrecy, medical personnel weren’t alerted to the danger of contamination from the liquid mustard that spread insidiously over the harbor, mixing with the tons of fuel oil from the damaged ships. 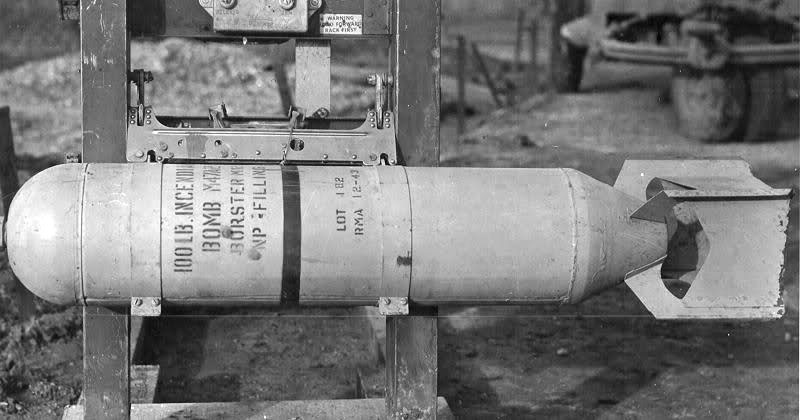 In the crush of casualties that first night, hundreds of survivors, who had jumped or been blown overboard and swam to safety, were mistakenly believed to be suffering from only shock and immersion. They were given morphine, wrapped in warm blankets and left to sit in their oil-soaked uniforms for as long as 12, and even 24 hours, while the seriously wounded were attended to first. It was tantamount to marinating in mustard gas. But all remained ignorant of the peril.

By dawn, the patients had developed red, inflamed skin and blisters on their bodies “the size of balloons.” Within 24 hours, the wards were full of men with eyes swollen shut. The doctors suspected some form of chemical irritant, but the patients did not present typical symptoms or respond to standard treatments. The staff’s unease only deepened when notification came from headquarters that the hundreds of burn patients with unusual symptomology would be classified “Dermatitis N.Y.D.“—not yet diagnosed.

Then without warning, patients in relatively good condition began dying. These sudden, mysterious deaths left the doctors baffled and at a loss as to how to proceed. Rumors spread that the Germans had used an unknown poison gas. With the daily death toll rising, British officials in Bari placed a “red light” call alerting Allied Force Headquarters (AFHQ) in Algiers to the medical crisis. Lieutenant Colonel Stewart Francis Alexander, a young chemical warfare specialist attached to Eisenhower’s staff, was dispatched immediately to the scene of the disaster.

The investigator’s findings were censored

Despite the British port authorities’ denials, Alexander quickly diagnosed mustard gas exposure. Convinced that preoccupation with military security had compounded the tragedy, he doggedly pursued his own investigation to identify the source of the chemical agent and determine how it had poisoned so many men.

After carefully studying the medical charts, he plotted the destroyed cargo ships’ positions relative to the gas victims and succeeded in pinpointing the John Harvey as the epicenter of the chemical explosion. When divers pulled up fragments of fractured gas shells, the casings were identified as being from 100-pound American mustard bombs.

On December 11, 1943, Alexander informed headquarters of his initial findings. Not only was the gas from the Allies’ own supply, but the victims labeled “Dermatitis N.Y.D.” had suffered prolonged exposure as a result of being immersed in a toxic solution of mustard and oil floating on the surface of the harbor.

The response Alexander received was shocking. While Eisenhower accepted his diagnosis, Churchill refused to acknowledge the presence of mustard gas in Bari. With the war in Europe entering a critical phase, the Allies agreed to impose a policy of strict censorship on the chemical disaster: All mention of mustard gas was stricken from the official record, and Alexander’s diagnosis deleted from the medical charts.

Alexander’s “Final Report of the Bari Mustard Casualties” was immediately classified, but not before his startling discovery of the toxic effects on white blood cells caught the attention of his boss in the Chemical Warfare Service (CWS), Colonel Cornelius P. “Dusty” Rhoads. In civilian life, Rhoads served as head of New York’s Memorial Hospital for the Treatment of Cancer and Allied Diseases.

Of the more than 617 casualties who suffered from gas exposure at Bari, 83 died, all demonstrating mustard’s suppressive effect on cell division—suggesting it might be used to inhibit the fast-multiplying malignant white cells that can invade and destroy healthy tissue. Alexander had extracted invaluable data from the morgue full of case studies, pointing to a chemical that could possibly be used as weapon in the fight against certain types of cancer.

Based on Alexander’s landmark Bari report, and a top-secret Yale University clinical trial that demonstrated that nitrogen mustard (a more stable cousin of sulfur mustard) could shrink tumors, Rhoads was convinced the harmful substance—in tiny, carefully calibrated doses—could be used to heal. In 1945, he persuaded the General Motors tycoons Alfred P. Sloane and Charles F. Kettering to fund the Sloan Kettering Institute for Cancer Research (SKI), to create a state-of-the-art laboratory, staffed by wartime scientists, to synthesize new mustard derivatives and develop the first medicine for cancer—known today as chemotherapy.

In 1949, Mustargen (mechlorethamine) became the first experimental chemotherapeutic drug approved by the FDA and was used successfully to treat non-Hodgkin’s lymphoma. This triumph galvanized the search for other chemical agents that specifically targeted malignant cells but spared normal ones, leading the American Cancer Society to credit the Bari disaster with initiating “the age of cancer chemotherapy.”