The Uzbek film director, screenwriter and artist Nazim Abbasov died yesterday at the age of 61. He outlived his father, director Shukhrat Abbasov, by only two years.

Nazim Abbasov started out as an actor: he starred as a young hostage of the lord Kabus in 'Abu Rayhan Beruni' in 1974, and also starred as the mullah's son in 'Fire Roads' in 1978. He graduated from the VGIK Art Faculty and since 1984 worked at the Uzbekfilm film studio as the production designer of the films 'Wolves', 'Kaja', 'Mysara's Tricks', 'Lame Dervish', as well as the director of 'Date in Samarra', 'Love, thief and thief.'

Nazim Abbasov’s films have repeatedly represented Uzbekistan at prestigious international film festivals, winning various prizes, in particular 'Eternal Circle' was awarded the audience’s prize at the 20th International Film Festival in Innsbruck, which, according to the director, was created in the “naive primitive style without any allegories or other things. " In 2011, the Uzbek media wrote that the film was shot in Khiva, in its historical part - Ichan-Kale. Detailed compositional images, open dialogue, music by composer Vladimir Baramykov represent the traditional national Uzbek cinema, which, according to the author, attracted a European audience which wanted simple human stories. The 'Eternal Circle' was presented not only in Austria, but also in Germany, Switzerland and Italy, where it was warmly received, despite the fact that it was created for the Uzbek audience.

But Nazim Abbasov's picture 'Fellini', which is not about the great Italian filmmaker, was the most recognized his work. The plot of the picture is very simple. The old film theatre in the Karakalpak town is living out its last days. Once upon a time there was the shore of the Aral Sea, life was in full swing, and the film industry flourished. Now the Aral Sea has dried up, the country has changed. But the projection engineer, nicknamed Fellini, is devotedly devoted to the film industry. His wife does not understand him and does not support his hobby, which was unprofitable. Once a film crew arrives in the village, and Fellini helps them, starring in the episode. Somehow the film hero invites guests to a dinner and shows his own film, mounted from fragments of old films that once struck his imagination. Nazim Abbasov received the prize for best directing at the National Film Festival in Bukhara in 2000; the film won a prize at the Warsaw International Festival and the Grand Prix at the Innsbruck Film Festival in 2002. Then Nazim Abbasov was elected a member of the Fellini Foundation. 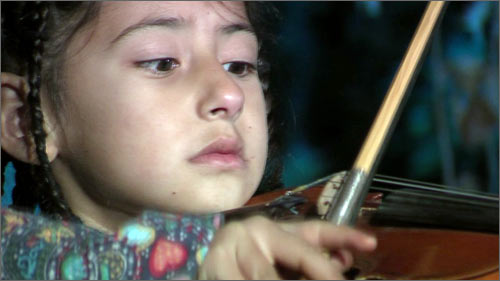 In 2008, Nazim Abbasov shot the film 'Oydinoy' - a parable about a six-year-old girl who lives in an Uzbek alpine village in southern Uzbekistan. Every morning, Oydinoy goes to the village school, announcing to everyone that today she will definitely be at lessons. But Oydinoy has not yet reached school age, and each time the teacher takes her out of the classroom. At the same time, Oydinoy make dolls, plays the violin, dances, sings, and she's the only one who sees inexplicable fantastic visions in the night sky over the village. Only grandfather Ehson-buva knows that these are his granddaughter's dreams that are reflected in the sky. In 2009 in Innsbruck, Abbasov received the prize "For valuable contribution to the history of the festival" for 'Oydinoy', and the leading actor - eight-year-old Marjona Shavkatova was awarded the special prize as "Best Actress".

As a director, Nazim Abbasov also shot two documentaries, the 'Last Sorry' in 2008, and 'This Beautiful and Mysterious World' in 2007.