Eight Middle East heritage sites you should know about

The Middle East and North Africa’s incredibly rich cultural, religious and natural history spans thousands of years, and across every corner of the region. The UN’s cultural agency Unesco has recognised this by handing World Heritage Site status to landmarks in every single MENA country with the exception of Kuwait. The inscriptions give sites legal protection in the form of an international convention, which helps to ensure conservation by local and government authorities. Middle East Eye reports that some of those sites, like the Pyramids of Giza and the Nabataean city of Petra in Jordan, are instantly recognisable and attract millions of tourists every year.

Others are lesser known, but still hugely significant in helping us understand the religion, science and culture of ancient civilisations.

When you think of high-rise buildings adorning picturesque skylines, cities such as New York, Dubai, Hong Kong and Tokyo spring to mind. But before all of them, came the old walled city of Shibam in Yemen. Built during the 16th century in Hadhramaut, Yemen’s largest governorate, Shibam is the oldest metropolis in the world to use vertical construction. Its iconic mud brick high rises were made using the fertile soil surrounding the city, and stretch up to eight stories high. 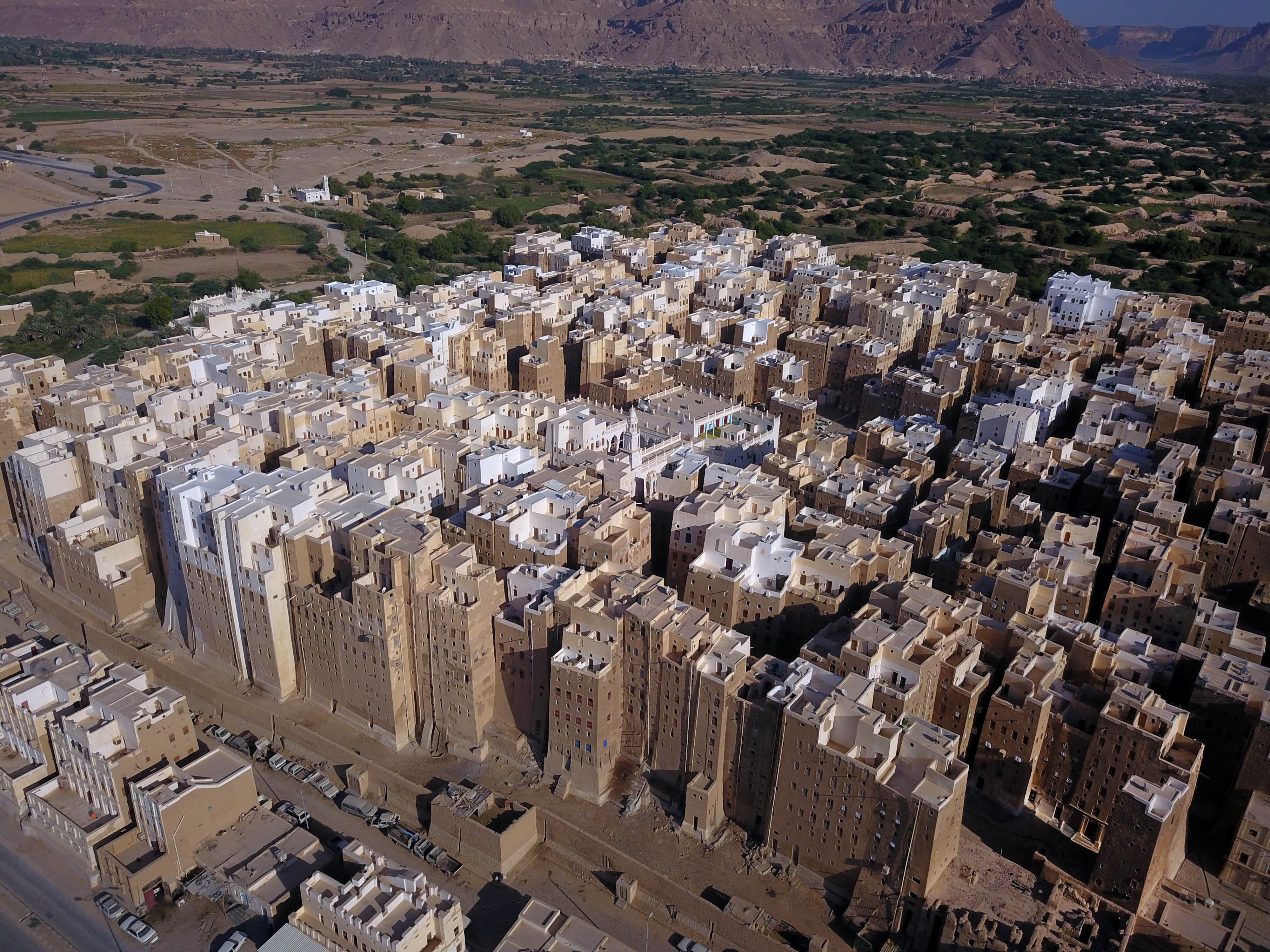 The entire city was purpose-built with defensive features. It was established within fortified walls and atop an elevated rocky spur, giving inhabitants a high vantage point to identify approaching rival tribes. The high-rise structures and connective bridges between buildings also offered ample escape routes during enemy attacks. Shibam has been recognised as an exceptional example of urban planning, with its densely packed tall buildings providing shade against the extreme heat. The city was described by British explorer Freya Stark in the 1930s as the “Manhattan of the desert”. It is home to 3,000 residents today, who continue to live in the mud brick towers. The buildings are vulnerable to weather conditions and erosion, with outer layers of clay needing constant maintenance to prevent walls from cracking and collapsing. Since the outbreak of civil war in Yemen in 2015, the city has come under threat from bombing, prompting Unesco to place it in the cultural heritage "in danger" category.

In the Western Desert of Egypt, 150km from the capital Cairo, lies a paleontological site of major significance. Wadi al-Hitan, which translates to "valley of the whales", contains rare fossil remains of some of the earliest forms of prehistoric whales. The site provides evidence of a crucial chapter in mammalian evolution: the transition of whales from a land-based animal to an ocean-going mammal. In 2015, the world’s first complete skeleton of a Basilosaurus, the first whale species to live entirely in the sea, was uncovered at the site. The 18-metre long find included fossilised remains of other sea creatures inside the whale’s stomach. Most of the Wadi al-Hitan’s fossils date back over 40 million years, and show whales in the last stages of losing their hind limbs. The number, concentration, quality and accessibility of the fossils in the "whale valley" exceed anywhere else in the world, according to Unesco. For years, the site was little frequented by visitors due to its desert location, but has since been transformed into a climate change and fossil museum by Egyptian authorities.

The site of Quseir Amra in Jordan is one of the best preserved desert castles from the Umayyad caliphate, the early Islamic empire which ruled the region between 661 and 750. Likely to have been built by Caliph Walid II, the castle was a pleasure retreat for the empire's rulers, away from the bustling capital of Damascus. The building consists of a reception hall and hammam (a bath complex with warm and hot rooms). The site’s most interesting aspect, and reason for inclusion on the Unesco list, is its spectacular and surprising mural paintings. 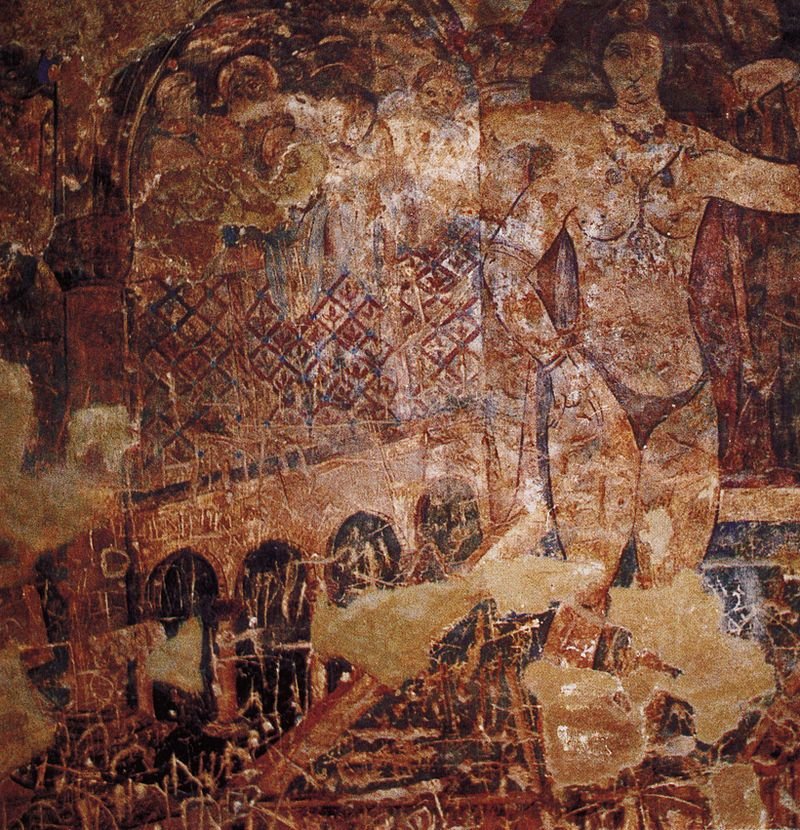 Extensive frescoes covering every wall and ceiling of the complex depict ancient rulers, hunting scenes and even dancing naked women. The paintings draw on pagan and Byzantine influences, showing little regard for Islamic prohibition on the depiction of animals and humans. Unesco highlighted the uniqueness of these secular paintings from the very early stages of Islamic art, which later came to be typified by geometric imagery. One of the most famous murals at Quseir Amra depicts six kings who had been defeated by the Umayyads, from Persia, Byzantium, Spain, Ethiopia, China and central Asia. Another fresco, on the domed ceiling of the hot room, is thought to be one of the earliest surviving portrayals of the heavens on a non-flat surface. The murals are currently undergoing restoration by a division of the Italian cultural heritage ministry, attempting to bring back colours and details permanently damaged over the years. 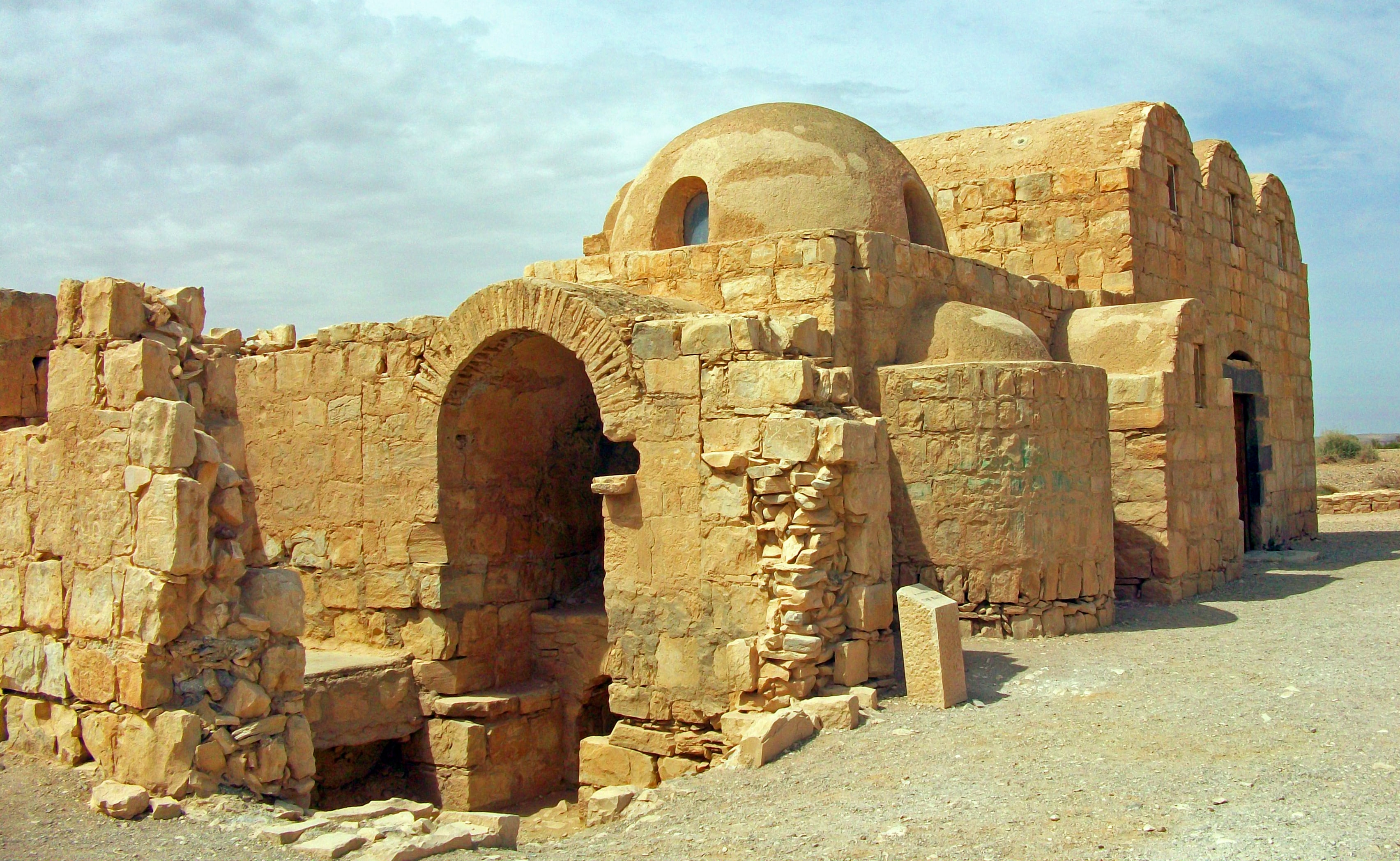 The most famous pyramids in the world undoubtedly lie in Egypt’s Giza, but the ancient structure serving as tombs for kings and queens is most widely found in Sudan. Over 200 Nubian pyramids were built during the Kushite kingdom, which ruled parts of modern-day Sudan and southern Egypt between the 10th century BC and 4th century AD. Most of the pyramids lie in Meroe, an ancient city 200km from Khartoum, which served as the Kushite capital for hundreds of years. Observers will notice that the tops of many of these pyramids are missing: they were blown off by Italian treasure hunter Giuseppe Ferlini in 1834, who robbed and desecrated the sites in a ruthless search for jewels and artefacts. The Unesco site, inscripted in 2011, encompasses all of the archaeological relics from the Kushite capital, including pyramids, temples, palaces and columns. 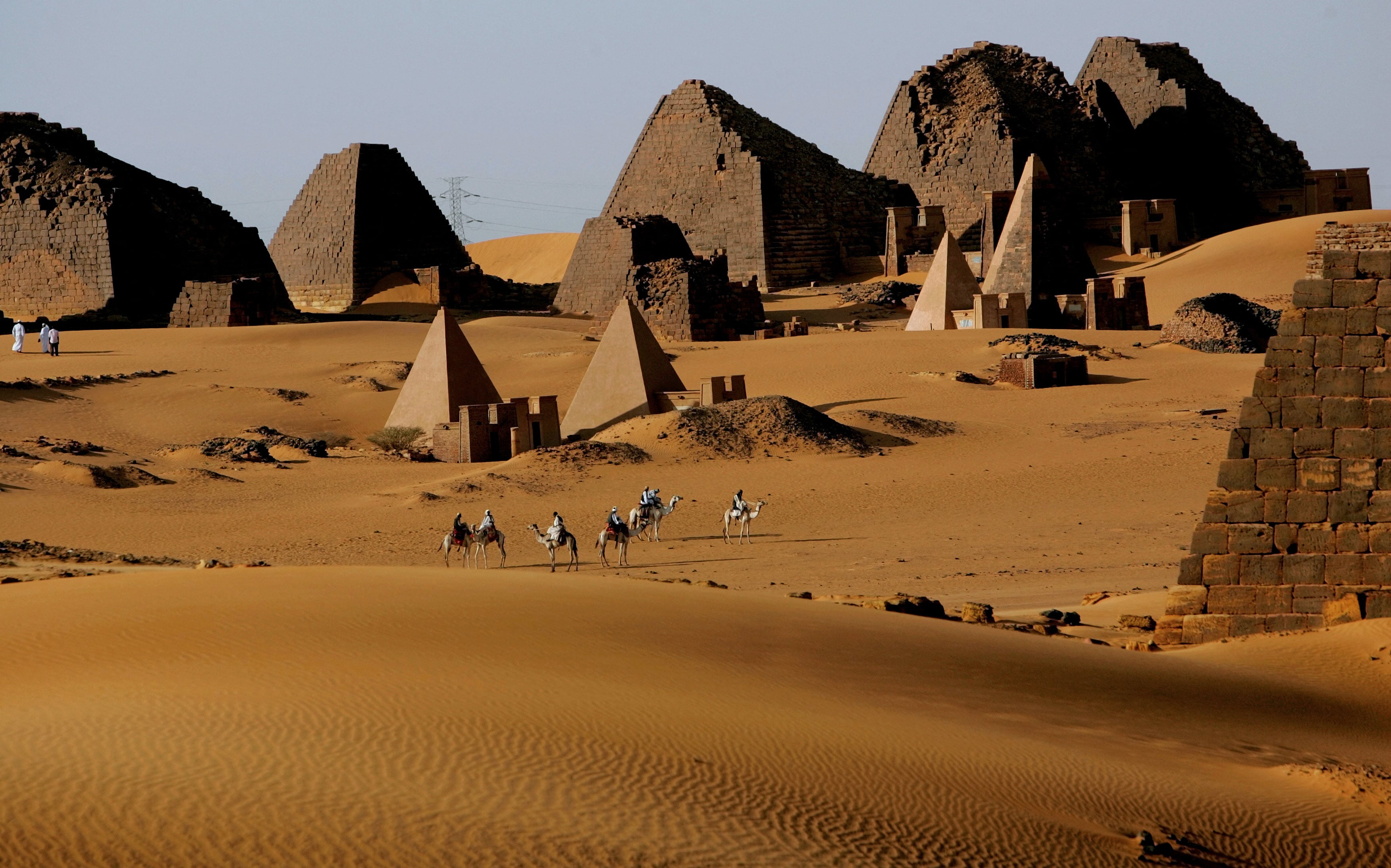 Despite having the world’s largest concentration of pyramids, Meroe is largely unvisited by outsiders, partly due to a lack of tourism infrastructure. Many in Sudan are hopeful that the revolution which ended the autocratic three-decade rule of Omar al-Bashir, and the subsequent removal of Sudan from the US sponsor of terrorism list, will lead to a growth in foreign visitors to the country.

The Tassili n'Ajjer national park, a vast plateau which lies in the Sahara desert in southeastern Algeria, contains one of the most important collections of prehistoric cave art in the world. The area has 15,000 drawings and engravings which span ten millennia, providing illustrated records of climatic changes, animal migration and the evolution of human life. The works include several distinct traditions of rock art, including the “round head” period (up to 10,000 years ago) in which hunter-gatherers engraved representations often linked to rituals and ceremonies, and the more recent cattle period (up to 3,000 years old) depicting daily and social life. 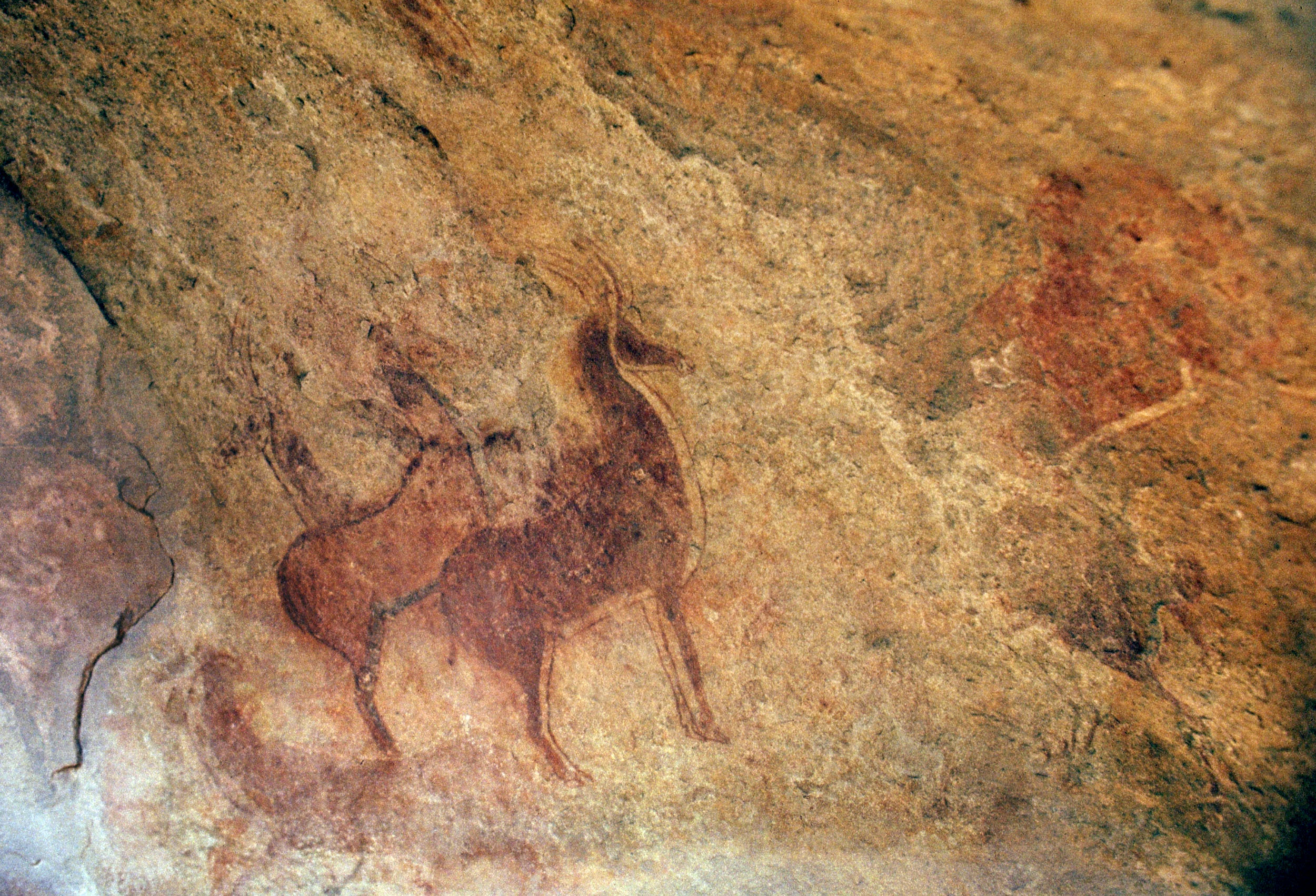 The Algerian property is also of remarkable geological interest, with its formation of “rock forests” from eroded sandstone which resemble a lunar landscape. The site was brought to the attention of the western world through French archaeologist Henri Lhote's numerous visits throughout the mid-20th century. Later anthropologists have critiqued Lhote’s expeditions, stating that he caused serious damage to the rock art and interpreted them in a way heavily influenced by French colonisation of Algeria. The national park is open to the public, however Algeria has a reputation for being notoriously difficult for foreigners to obtain a tourist visa.

The Kadisha Valley in Lebanon is a Unesco site of both religious and natural significance. The “holy valley” is carved by the Kadisha river which runs through parts of northern Lebanon, including the city of Tripoli. It is home to some of the earliest and most important Christian monasteries. The hard-to-access monastic cave dwellings date back to the very first spread of Christianity, and provided the faithful with ideal conditions for isolation and refuge. Many of the sites are almost inaccessible, perched on cliffs at altitudes as high as 150 metres. 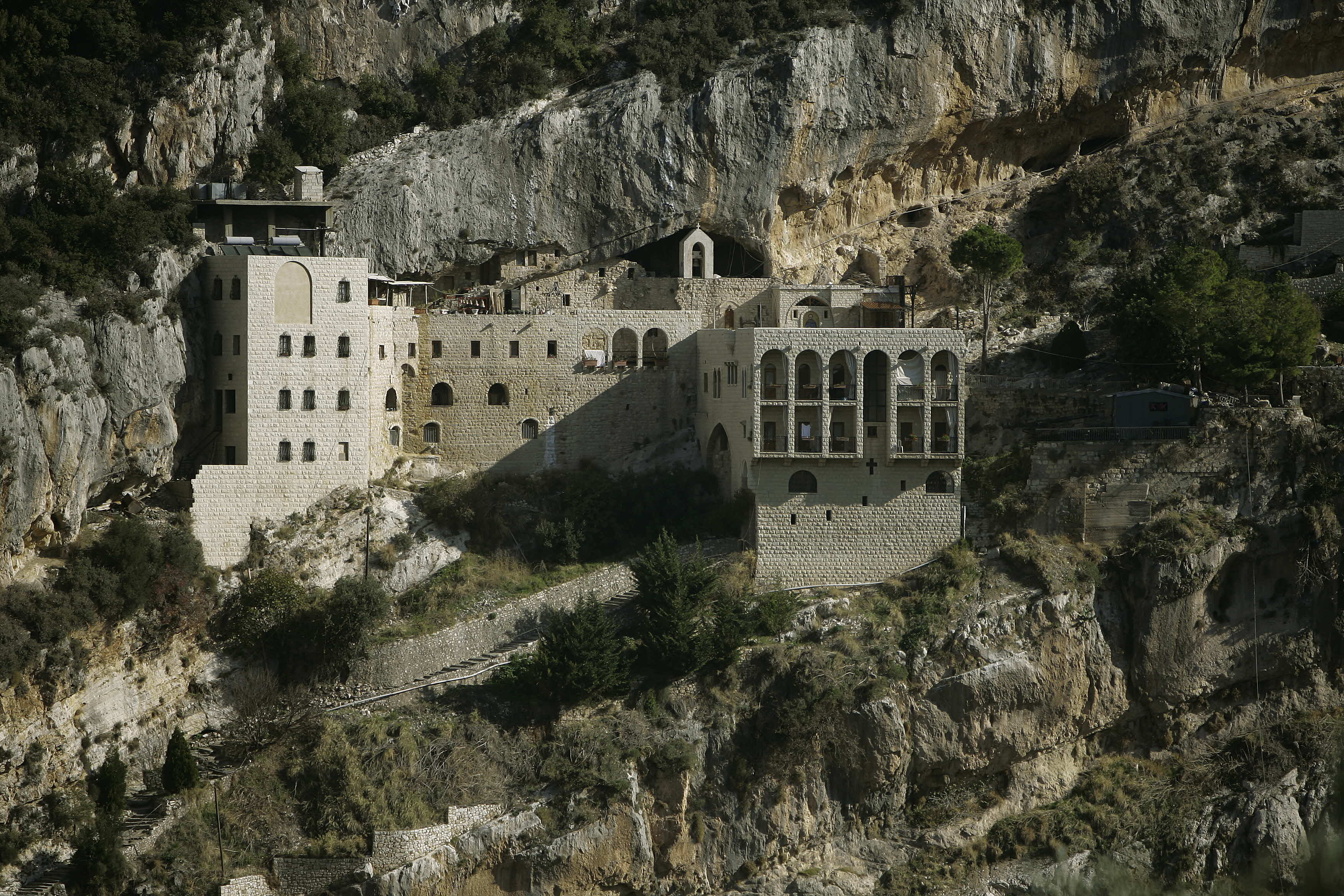 The valley is also notable for the “Cedars of God” forest located within it, which contains the last vestiges of the Lebanese cedar, one of the most valuable construction materials during ancient times, which has since become a national symbol of Lebanon. Centuries of use of the timber by Egyptians, Phoenicians, Ottomans, the British and several other civilisations and empires has left only 17 square kilometres of cedar trees - 0.4 percent of the estimated ancient cover. Climate change is also threatening the historic tree, with a rise in temperatures disrupting the climatic conditions needed for its growth. While the valley is not yet included in the “in danger” category, Unesco has warned against increased human settlements, illegal constructions and uncontrolled visitor flows, which have impacted the integrity of the site.

The Al Hijr archaeological area became Saudi Arabia’s first Unesco heritage site in 2008. It dates back to the Nabataean kingdom, which ruled parts of northwestern Arabia from the fourth century BC, until its territory was annexed by the Romans in 106 AD. Al-Hijr was the ancient Nabataean civilisation’s largest settlement outside of its capital Petra in Jordan.

The site consists of over 100 monumental tombs, most of which have elaborately ornamented facades cut directly into the sandstone rocks. Al-Hijr is commonly referred to as Mada'in Salih (cities of Salih), owing to a Quranic story which refers to the area. According to the Quran, the Prophet Salih was sent to the people of Thamud, an ancient polytheistic tribe thought to be living in Al-Hijr, to guide them away from idolatry. The Thamud rejected the prophet’s message, and killed a female camel sent to them by God, which is believed to have led to their destruction in an earthquake. 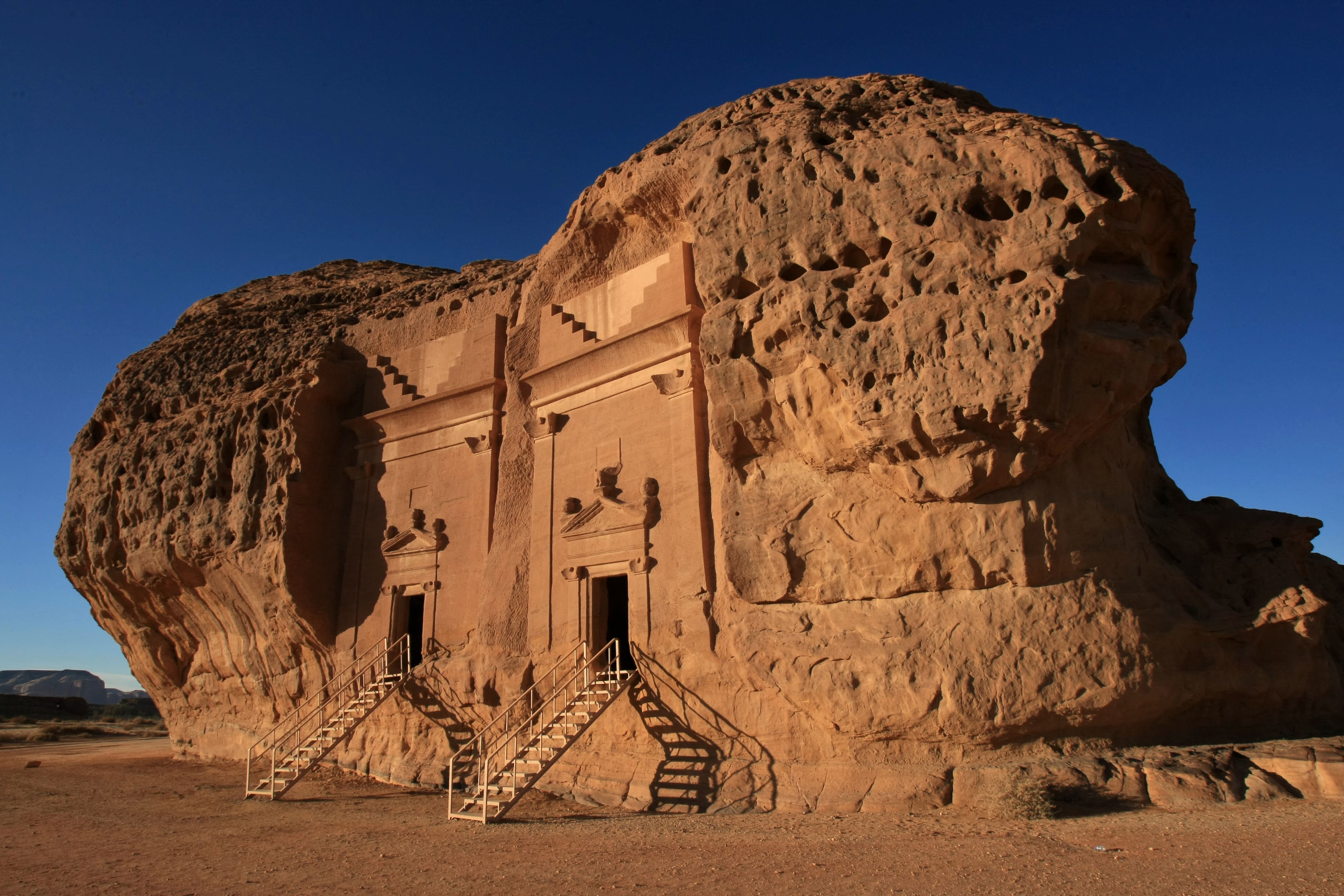 In modern day Saudi Arabia, the site lies in the city of Al Ula, a vast area littered with archaeological sites dating as far back as the Bronze Age, four millennia ago. In 2018, Saudi Arabia signed a multi-billion dollar deal with France to develop the world’s largest open air museum in Al-Ula, making it the cornerstone of the kingdom’s plan to attract millions of tourists each year.

The archaeological city of Samarra in Iraq offers a close look at life under the Abbasid caliphate, the major Islamic empire which ruled large swathes of North Africa, the Middle East and central Asia between the 8th and 13th century. Samarra is credited by Unesco as being the only Islamic capital to have maintained its original plan, architecture and art, including mosaics and carvings. This is because the city was abandoned relatively early, avoiding the constant rebuilding of other capitals such as Baghdad. 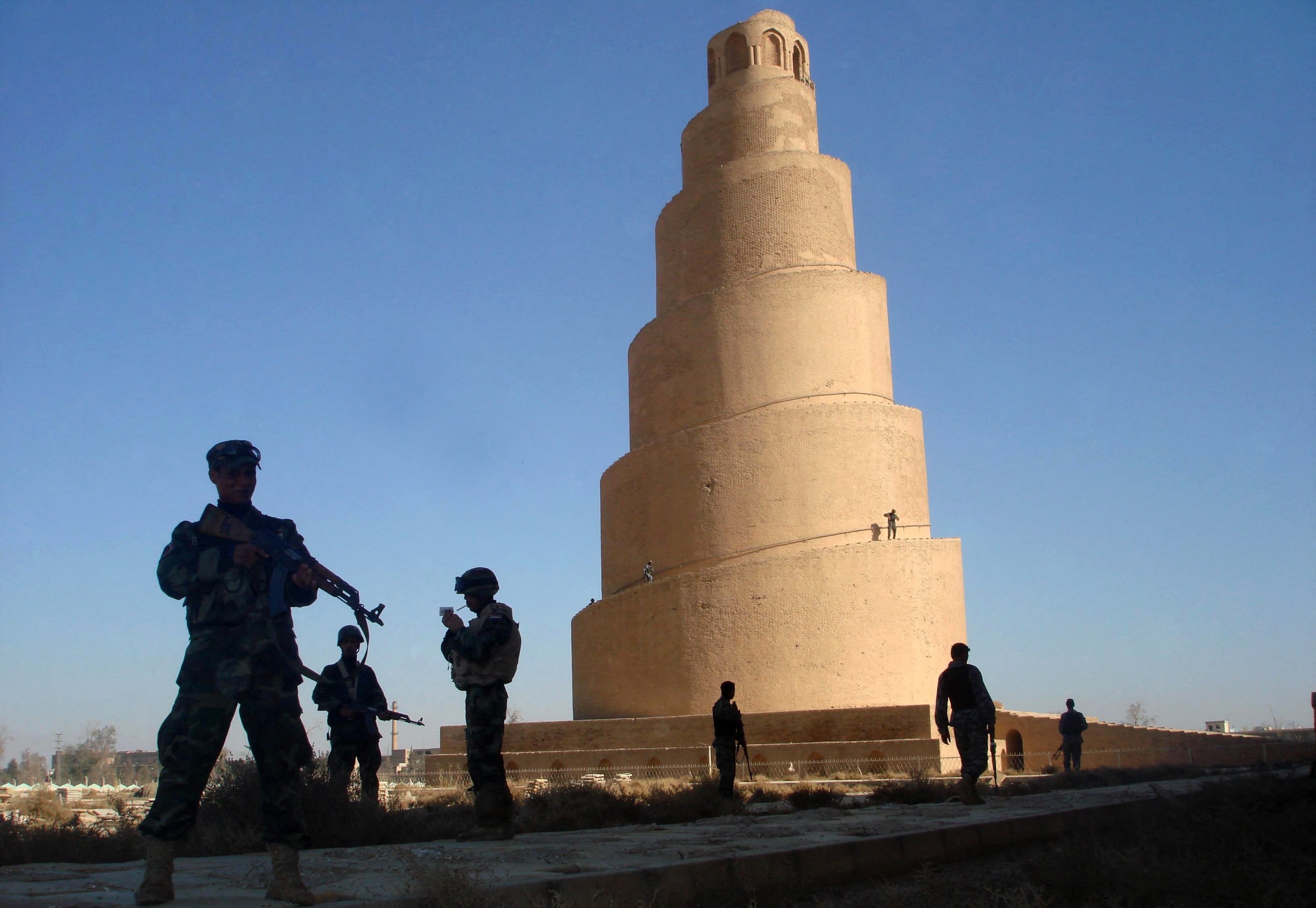 The Great Mosque of Samarra, built in 851, was the world’s largest mosque at the time of construction. Its unusual and iconic spiral minaret remains mostly intact, standing at 52 metres tall. The ancient city is of deep religious significance to many Shia Muslims, as it is home to the Al-Askari shrine, a mosque and mausoleum in which the 10th and 11th Shia imams, who are descendents of the Prophet Muhammad, are buried. It is also the site from which Muhammad al-Mahdi, the 12th and final Shia imam, disappeared during the "major occultation". Worshippers believe that he will return during end times, along with Jesus, as a redeemer bringing peace to the world.

In recent times, Samarra has seen rising tensions and conflict, leading to its inclusion in Unesco’s “in danger” category. During the Iraq War in 2005, US forces were accused of putting at risk the city's famed minaret, after it was used to launch a sniper attack against Iraqi insurgents. The al-Askari Mosque was also bombed several times between 2006 and 2007, and the city came under further attack from the Islamic State militant group in 2014.