The videoconference, which was joined by heads of state and government from more than 40 member states, was attended by the UN Secretary General, the President of the UN General Assembly, the Chairperson of the African Union and WHO Director General, the highest representative of the European Union.

In his opening speech, Ilham Aliyev said that the COVID-19 global pandemic had a negative impact on all countries, but it can be overcome with mutual support and joint efforts. He also spoke about measures taken in Azerbaijan to prevent the spread of coronavirus, stressing that the priority for Baku has been to protect human health and ensure their social protection. As a result of all the measures taken in the country, it has been possible to prevent mass infections. Over the past three weeks, there has been a positive trend between the number of people infected and those recovering. The President of Azerbaijan also also highlighted the work done to ensure economic stability in Azerbaijan during the pandemic, solve employment problems and maintain macroeconomic and financial stability, noting that a socioeconomic support package worth 3.5 billion manats had been adopted for the purpose. Ilham Aliyev proposed to hold a special video conference of the UN General Assembly at the level of heads of state and government dedicated to the COVID-19 pandemic.

UN Secretary General António Guterres thanked Ilham Aliyev for this initiative, saying that the scale and complexity of the crisis demand a coordinated global response. The President of the 74th session of the UN General Assembly Tijjani Muhammad-Bande supported Ilham Aliyev's view that no country could overcome this difficulty on its own: "As the United Nations, we are very pleased to support such initiatives and want to prevent the spread of the COVID-19 virus. We would also like to see inequality among all states and nations eliminated."

Director-General of the World Health Organization (WHO) Tedros Adhanom Ghebreyesus praised the support provided by Azerbaijan to the organization in the amount of $5 million. Emphasizing the importance of global solidarity and international cooperation in the fight against the pandemic, Ghebreyesus said that efforts should focus on long-term multilateral action covering various areas at the level of society as a whole. 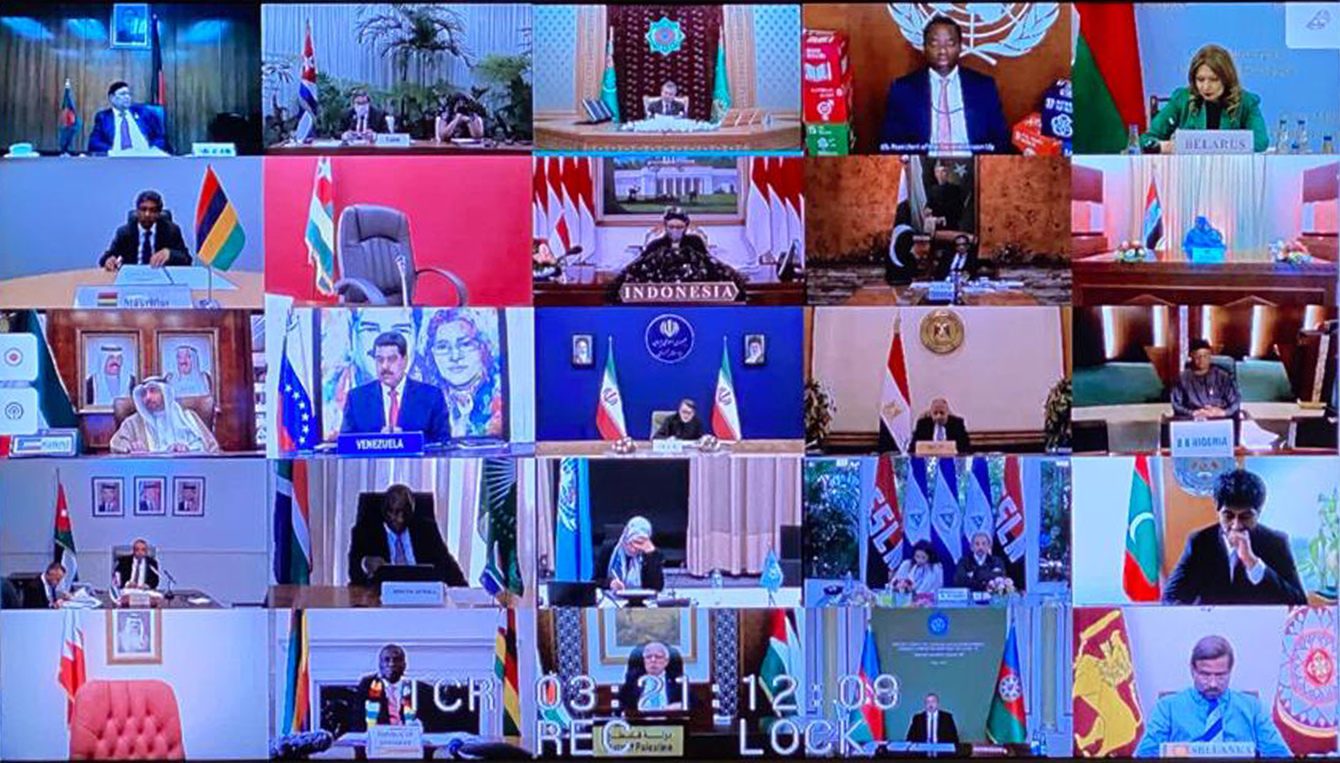 Chairperson of the African Union Commission Moussa Faki Mahamat noted that they must put aside any political boundaries and any ideology and achieve the goals by working together.

The 18th Summit of Heads of State and Government of the Non-Aligned Movement member countries was held under the chairmanship of President Ilham Aliyev in Azerbaijan on October 25-26, 2019, when Baku took over the NAM chairmanship for 2019-2022. The promotion of multilateral diplomacy, strengthening cooperation and solidarity between the NAM member states was identified by Ilham Aliyev as one of the key priorities of Azerbaijan's chairmanship of the organization. The extraordinary Summit of the Turkic Council was held on April 10 this year through videoconference on the initiative of President of Azerbaijan, chairman of the Cooperation Council of Turkic-Speaking States Ilham Aliyev. The Turkic Council was the first international organization across the globe to hold a summit on the coronavirus pandemic at the level of heads of state.

According to experts, by doing this Azerbaijan is not only taking effective measures to combat COVID-19 at the national level, but is also making a significant contribution to the strengthening of solidarity and cooperation against coronavirus at the regional and global levels.