The plant will manufacture fuel assemblies, which generate thermal power inside a nuclear reactor. “Establishment of this innovative production will allow Kazakhstan to enter the small circle of states manufacturing and supplying nuclear fuel for nuclear power plants. The project is a great example of successful multilateral cooperation of leading global nuclear companies. The knowledge-intensive production opens up new opportunities for our country to further develop cooperation with other states in the nuclear area,” Mazhit Sharipov, Chief Executive Officer of Kazatomprom noted in his speech.

Ulba-FA is a Kazakh and Chinese joint venture, the founders of which are UMP (a subsidiary of Kazatomprom) holding a 51 percent stake, and CGNPC-URC (a subsidiary of China General Nuclear Power Corporation), holding a 49 percent stake. The advanced technology of French company Framatome, an international leader in nuclear energy, was selected for FA manufacturing. A single FA consists of 264 fuel rods, which are long metal rods loaded with uranium fuel pellets. They are manufactured by the Ulba Metallurgical Plant. Thus, the new plant will allow, along with its own activities, to "load" the capacity of the Ulba Metallurgical Plant.

Ulba-FA has also received a Framatome certificate, which confirms the plant is authorized for AFA 3GTM manufacturing with a capacity of 200 tons of uranium per year. All requirements of CGNPC-URC – the guaranteed purchaser of the fuel assemblies – have been met. Eventually, the plant became a certified supplier for the Chinese nuclear industry. As the chairman of the board of JSC Ulba Metallurgical Plant Sergey Bezhetskiy noted, "thanks to the cooperation of Kazatomprom with foreign partners, Kazakhstan is becoming a supplier of an integrated package of services."

During the construction of the plant, high-tech equipment produced in China, France, Germany and the USA was used. Eurasianet writes, the participation of the USA is notable, since Washington last year ordered a suspension of exports of any radioactive materials intended for use in CGNPC facilities over fears that China is boosting its nuclear weapons capability. 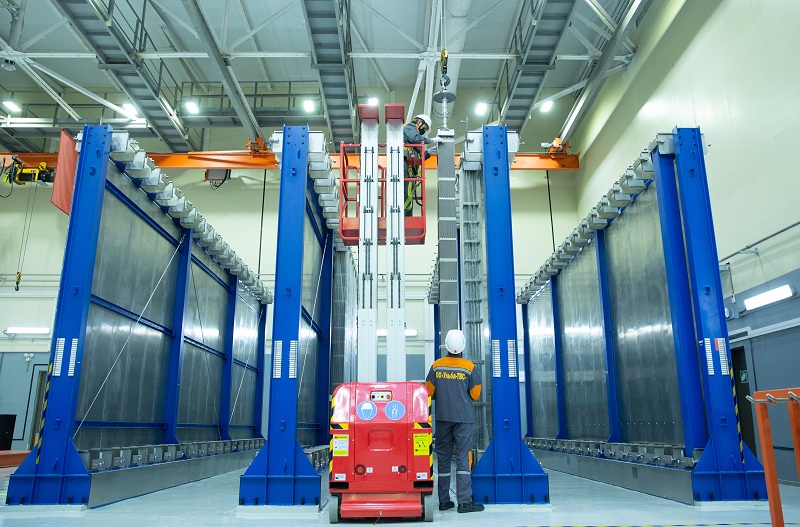 A fuel assemblies plant heralding a new phase of nuclear cooperation between Nur-Sultan and Beijing has received its first shipment of low-enriched uranium from Russia.The fuel division of Russian energy giant Rosatom made the delivery to the Kazakh-Chinese factory. The UMP hosts the Low Enriched Uranium (LEU) Bank, a $150 million initiative backed by the International Atomic Energy Agency, which aims to be a store of low-enriched uranium for countries pursuing civilian nuclear power programs. “As a state possessing large volumes of uranium-containing raw materials, we contribute to the peaceful use of atomic energy,” said then-President Nursultan Nazarbayev at the LEU’s opening ceremony in 2017.

China and Kazakhstan’s cooperation in the field dates back to at least 2006. That was the year that CGNPC entered the market and formed with Kazatomprom a joint company Sezimbai­-U that develops two Kazakh uranium mines. This summer, CGNPC acquired for $435 million a 49-percent stake in a Kazatomprom subsidiary that has two different mines in the southern Turkestan region.

Russia, Kazakhstan’s oldest partner in uranium projects, appears to have cemented its role as the plant’s supplier. Up until January of last year, Kazakhstan had a minority stake in the Ural Electrochemical Integrated Plant across the border in Novouralsk thanks to its 50-percent stake in a venture with TVEL. That month Kazatomprom sold the stake to the Russian side, retaining a single share and guaranteed access to the output of the plant – the oldest of its kind in Russia.

TVEL said in its statement that deliveries for Ulba-TVS LLP would be regular as part of a commercial contract.

The last time Kazakhstan had its own nuclear power plant was more than two decades ago. Since that facility in the Western town of Aktau was closed, proposals to build a new one have been met with rancor. That is partly due to the history of the Soviet nuclear weapons programю