A waypoint on the Old Silk Road, Sheki, in northwest Azerbaijan, is a place of boisterous spice markets, handicraft workshops and heritage architecture. It wasn’t all that long ago that a visitor’s first glimpse of Sheki would be from the back of a camel. Today, it tends to be from the window of a marshrutka, the nostalgic, Soviet-era minivans that trundle almost as laboriously up and down the time-worn trade route between Baku and Tbilisi.

National Geographic reports that those who prefer a smoother ride can board the direct train from Baku, reaching this ancient city in around seven hours. Sheki’s location roughly halfway between the Azerbaijani and Georgian capitals is your first clue to the city’s historical significance. For as long as a tributary of the Silk Road ran through the South Caucasus, this was a place for merchants to bunk down at stone caravanserais (roadside inns) to sip tea, barter cargo and swap stories. It was this meeting of minds that helped shape Sheki into the diverse, cosmopolitan city it is today.

More than just a thoroughfare, however, Sheki was a major producer of silks in its own right. The art of kelaghayi (silk scarves intricately decorated using wooden stamps dipped in a mix of rosin, paraffin and solid oil) is but one craft tradition in an oeuvre that spans everything from shebeke (stained glass mosaics) to Sheki halva, a saccharine dessert favoured by the locals, who are known for having a sweet tooth. Visit Sheki to wander Azerbaijan’s newest UNESCO World Heritage Site — the historic centre of the city with the Khan’s Palace — and take a hike to see ancient monuments nestled in the foothills of the Caucasus mountains.

Day one: palaces and piti

Morning: Go straight to the Khan’s Palace, commissioned by Muhammed Hasan Khan in 1797. A masterpiece of craftsmanship, its exterior showcases Ottoman ceramics and Iranian mirror work. The real knockout, though, is the shebeke — timber lattice inlaid with thousands of pieces of coloured glass. Pause to admire the facade ahead of a guided walk through the palace rooms, the walls of which are adorned with vivid paintings. The nearby Three Saints Church houses the Museum of History and Local Lore, where you can view traditional takalduz (silk embroidery) and papags (lambswool hats), and watch shebeke artisans at work. 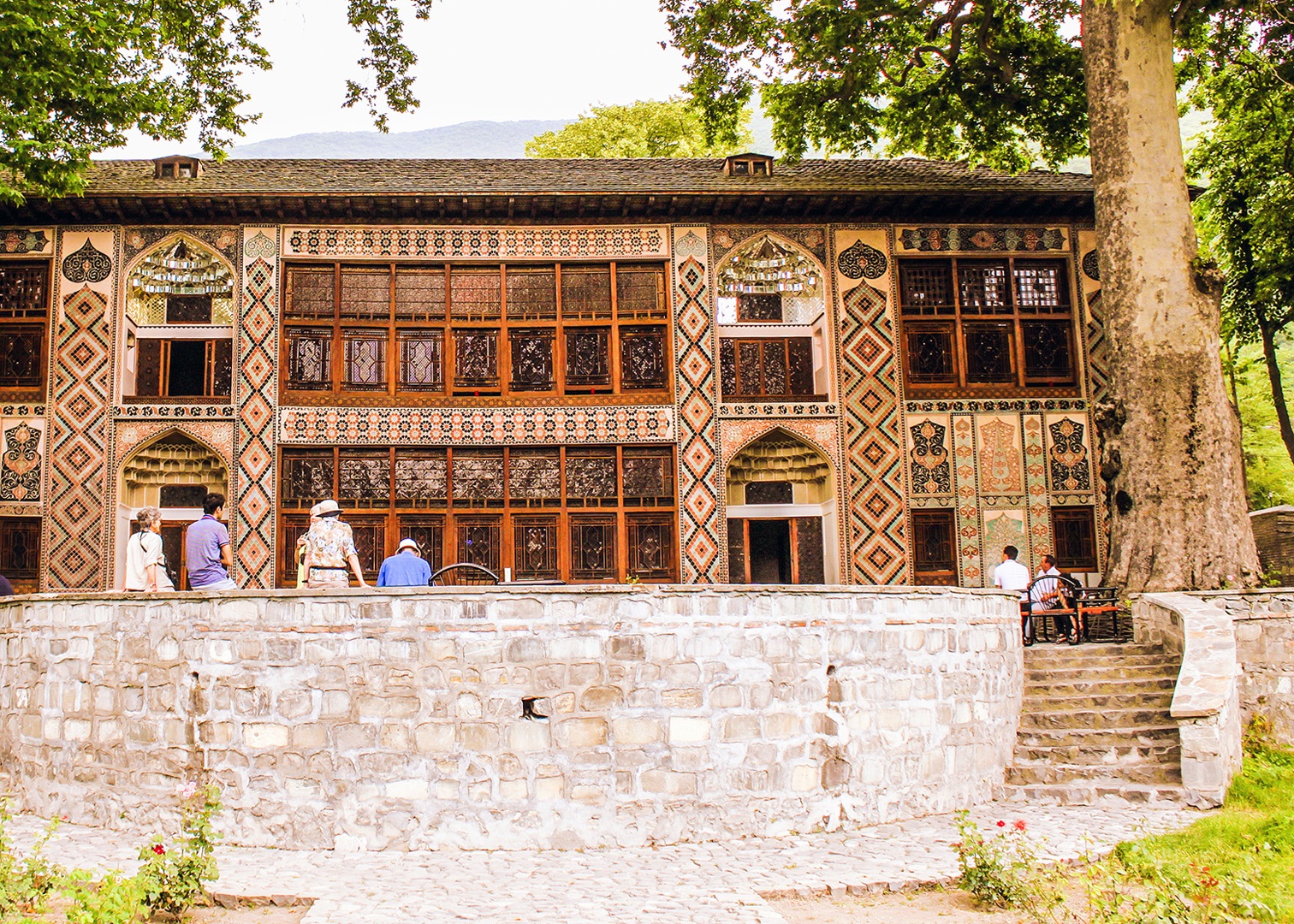 Afternoon: A 20-minute stroll takes you to Mustafa Bey, a restaurant set among apple and pear trees. Order the piti, a lamb, chickpea and chestnut stew that’s an appetiser and main in one — first, drown pieces of bread in the broth, then devour the rest. Head back through the Gilehli district, using the 18th-century minaret as your North Star, and stop off at Aliahmad Shirniyyat, the finest purveyor of Sheki halva. The local take on baklava sees layers of dough, ground hazelnuts, walnuts and spices finished with a web of sugar reminiscent of shebeke.

Evening: Visit the Winter Palace an hour before dusk, when the sun hits the shebeke and paints the floorboards with a carpet-like kaleidoscope. Tuck into a plate of khangal (flat noodles topped with ground beef and garlic yogurt) at Buta Restaurant, then retire to the elegant Buta Bar cocktail lounge in the atrium of the Sheki Saray Hotel.

Morning: Explore Sheki’s Silk Road past with a trip to the New Bazaar, where merchants peddle produce, spices and halva. Grab a bite at one of the kebab stalls or duck into a chaykhana (tea house) for a finger or two of bamiya (deep-fried dough gilded with syrup), washed down with a warming drink from the samovar. Sheki’s old town, Yukhari Bash, beckons you back up the hill to tread the cobbled streets beyond the fortress walls. Admire the 18th- and 19th-century houses with their ornamental brickwork and gabled roofs, once owned by the merchants who made their fortune breeding silkworms. The Juma Mosque, with its 90ft-high minaret, is impossible to miss. 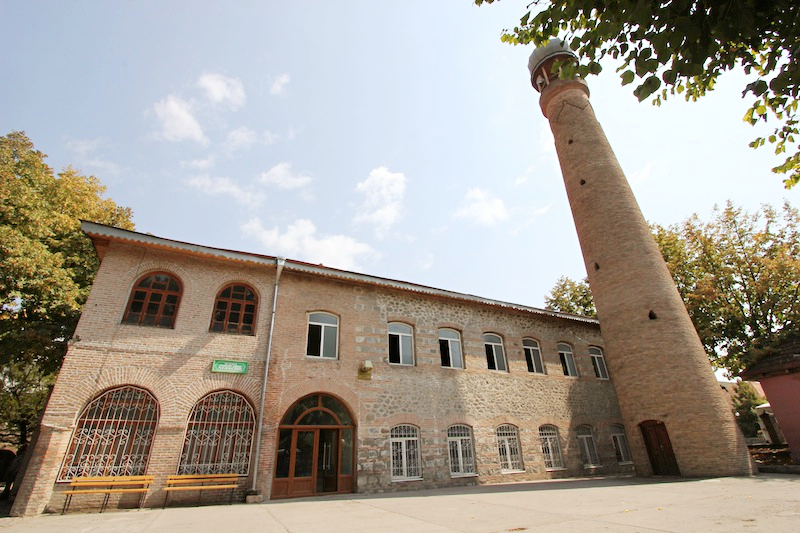 Afternoon: If you’ve developed a taste for Sheki’s signature stew, break for lunch in the garden of Restoran Qaqarin, famed for its piti and dolma (stuffed vine leaves). Afterwards, make your way to the perfectly preserved Sheki Caravanserai, one of the largest in the region. Push through the heavy doors and let the sliver of sunlight guide you through the dim antechamber towards an inner courtyard, where you’ll find sanctuary beneath a palm tree. Drink in the history as you conjure images of merchants dashing through the double-storey arched arcades. The caravanserai still functions as a hotel, and walk-in visits to the courtyard and tea house are welcome between 12.00 and 19.00. The stone cells of the building’s lower portion, meanwhile, have been given a new lease of life as cafes and souvenir boutiques.

Continue down M.F. Akhundzadeh, Sheki’s main trading street, passing the ruins of an arched bridge. You’ll see a number of small workshops, where artisans carry out tasks as varied as stringing tars (long-necked lutes) and block-printing kelaghayi. At the crossroads of F.K. Khoyski and M.E. Rasulzadeh streets, the spools of Sheki’s last silk factory — built in 1829 — still turn. Drop into the adjoining boutique to buy colourful scarves or a hand-knotted silk carpet small enough to fit in your suitcase.

Evening: Sheki was once divided into mehelle, or districts, which each had their own mosque and hammam. Visit Abdulkhalig Hammam, the city’s oldest functioning public bathhouse, for a traditional kise body exfoliation (note that the bathhouse is open to men and women on different days of the week).

Morning: Fuel up for the day with a quick breakfast ahead of the 45-minute marshrutka ride northwest to Gakh. A former province of Caucasian Albania (an ancient state that was established in the fourth century BC and incorporated parts of modern-day Azerbaijan and Daghestan), Gakh is a testament to this region’s religious diversity. Stop off at Kurmuk Church — perched on a rocky outcrop — before continuing to Ilisu, a small village whose name comes from the Kipchak (an extinct Turkic language dating back to the Middle Ages) word for ‘warm water’, and whose hot springs, geysers and waterfalls entice visitors. Slip into one of the rock pools to unwind after a short walk along the Hamamchay River.

Afternoon: Once suitably reinvigorated, find a table at a riverfront restaurant in Gakh. Make sure to order the local speciality, surhullu (flat pasta served with a rich sauce of mutton, herbs and garlic), alongside a pitcher of delicious wine cultivated in the valley by Georgian Ingiloys. After lunch, travel back to the village of Kish, just outside Sheki, where the echoes of Azerbaijan’s Christian past ring out clearly. The Church of Kish is built on what’s thought to have been a Pagan ceremonial site dating back to the first century. Crane your neck to admire the domes overhead and peer down through the glass-covered portals underfoot to view the burial crypts.

Evening: A 30-minute walk will take you to Garatepe Mountain, where the ruins of the medieval Galarsan-Gorarsan (‘Come and See’) fortress provide the perfect backdrop for sunset. After a 20-minute van or taxi drive back to Sheki, indulge in one last pot of piti, and be sure to pick up a box of Sheki halva from Aliahmed Sweetstore to savour on tomorrow’s journey to the capital, Baku. 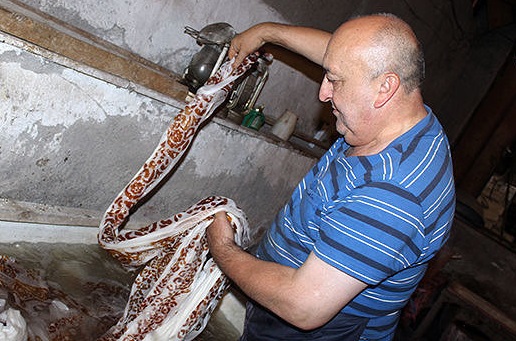 - How important is kelaghayi to Sheki?

- Sheki has been famous for its silk for centuries. Traditional kelaghayi scarves started here and spread to other regions across Azerbaijan. I’m 67 and every day, I come to the workshop, put on my boots and apron and start working. I’m very proud of my craft.

- What do you love about your job?

- When I see the demand for old-fashioned styles and colours and the use of antique techniques. Most of my designs and tools were used by my predecessors.

- And your favourite thing about Sheki?

- A pot of our traditional dish, piti. There are other delicious meals, but if I had to pick just one, that would be it.