New York Time: Russian fans have no trouble with the ban on their national symbols at the Tokyo Olympics

Sports fans and officials in the country have no trouble seeing through the thin fiction of a doping-related ban on their national symbols at the Tokyo Olympics, New York Times reports.

Russia’s Olympic team is competing abroad in unmarked uniforms without the country’s flag. When a Russian wins a gold medal and takes the top spot on the podium, the country’s national anthem doesn’t play. Instead, a portion of Tchaikovsky’s Piano Concerto No. 1 celebrates the winner.

Sports fans and sports commentators are having no trouble seeing through the thin fiction of the odd, bureaucratic moniker of their team — R.O.C., an acronym for the Russian Olympic Committee. “Nobody is bothered at all by this situation,” Dmitri Kozika, a bartender at Probka, a sports bar, said of Russian sports fans. Through the warm twilight of a recent summer evening in Moscow, fans sat at leather-upholstered bar stools, sipped beers and kept an eye on replays from Tokyo. When Russians rack up gold, which happens often enough at any Olympics, the patrons cheer, Mr. Kozika said. If anything, he said, the extra scrutiny of their team, which had to pass a rigorous drug clearance program, has given Russian sports fans a restored sense of pride in the victories that followed. “They checked our guys really thoroughly,” Mr. Kozika said. “They are clean.”

Roman Pritula, an ambulance medic taking a well-deserved break at the bar from Covid-19 duty, similarly shrugged off the Russian team’s strange name. “It doesn’t prevent us from being proud,” he said. “It doesn’t matter if they compete under the Olympic flag. They are still Russians. And when they win, it causes positive emotions.”

And even officials who once complained bitterly about the doping restrictions have taken to lightly poking fun at what was meant to be a humbling state of affairs. The Foreign Ministry video, for example, ended with the thumping drums of the rock song by Queen “We Will Rock You” — which is rendered in writing, of course, as “We Will R.O.C. You.”

The commanding victory over the United States in women’s team gymnastics, the head of Russia’s Olympic Committee, Stanislav Pozdnyakov, said proudly, will inspire a new generation of young Russian girls to become gymnasts. The Russians Lilia Akhaimova, Viktoria Listunova, Angelina Melnikova and Vladislava Urazova won gold medals after the American star Simone Biles pulled out of the competition, saying she had become dangerously disoriented during a vault and wasn’t mentally prepared to continue.

The sports commentator for state Channel 1, Dmitry Guberniyev, was so inspired by the Russian — sorry, R.O.C. — victory that he suggested declaring a national holiday. “We just need a Russia-wide celebration,” he said. “The team was just unbelievable. We are creating miracles.”

Lidiya Ivanova, a commentator on Match TV, a Russian sports channel, couldn’t curb her enthusiasm as the Russian female gymnasts won the gold. “What are you achieving, our girls! You are the best because you are Russians! You defended the honor of the country,” she said. “I adore you. Everybody adores you.”

Russians have pointed with pride to the actions of a female fencer, Marta Martyanova, whatever the name of her team. Ms. Martyanova refused to bow out despite a leg trauma painful enough to leave her crying and hopping on one foot. At that point no substitutes were allowed in the team competition, and withdrawal would have cost the Russians a shot at a medal, so her stoic endurance saved the day. Russia’s team went on to win the gold.

The doping restrictions have hung over Russian sports for years, to the point Russian sports fans no longer pay attention, Aleksei Durnovo, a commentator for Telesport, said in an interview. “They just want to watch sports, not think about what is happening in medical laboratories,” he said. Many Russians are just happy to see their gymnasts, swimmers, equestrians, archers and other athletes have a shot at medals. But on a darker note, beating the doping restrictions for some Russians also became something to cheer for this summer. 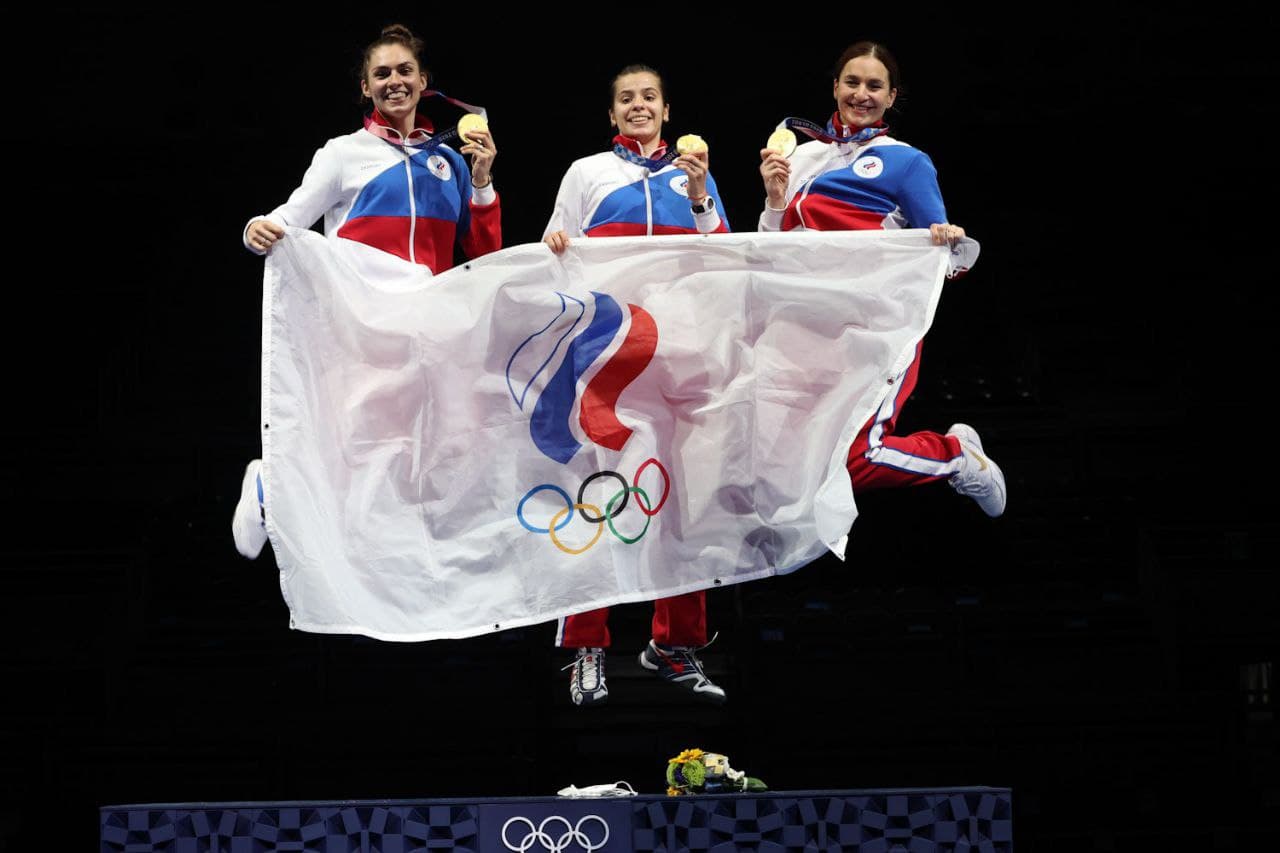