Spring has officially arrived Thursday night, but large events across the region to celebrate Novruz have been canceled to limit the spread of coronavirus. Although festivities will not take place, many people staying at home can treat themselves with classic holiday pastries, especially if they have a sweet tooth. Caspian News reports in its article Here Are Three Must-Try Novruz Pastries that Azerbaijan has its own classic pastries — pakhlava, shakarbura, and gogal — which are irresistible at any Novruz gathering.

Azerbaijan, a country stretching along the western shoreline of the Caspian Sea, has dozens of recipes for preparing this national favorite as almost every region of this South Caucasian country cooks this pastry in its own way. The northern region of Sheki, for example, makes pakhlava square-shaped, while in Gabala – also in the north – it comes as a triangle, known as uchgulag or “three ears” in Azerbaijani.

Residents of Baku, Azerbaijan’s capital city, cook pakhlava in its most classical form — in the shape of a diamond, meant to symbolizes a star. This kind of pakhlava is made of about 10 layers of filo pastry filled with chopped nuts, cardamom, and cinnamon that gets sweetened with syrup or honey. In addition, each piece of this pastry is decorated with a nut placed in the center of the star. 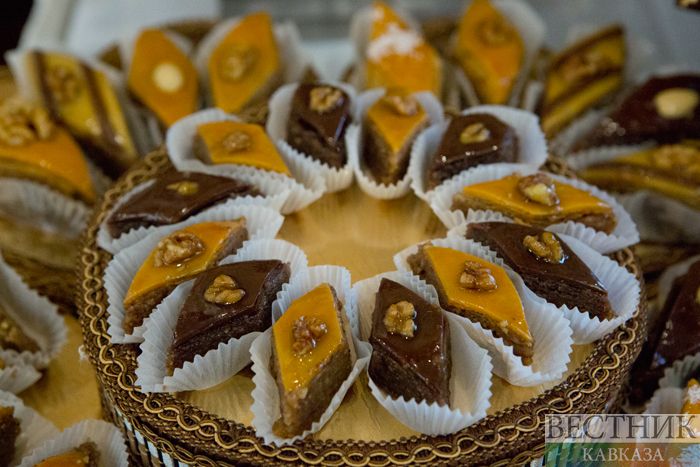 This hearty pastry that can help overcome even the sharpest feelings of hunger does not spoil over long periods, so that is why it used to be a ‘must bring’ for any camper or hiker setting out on month-long voyages.

Again, shakarbura differs from region to region – for example, in the northern Zaqatala, which is home to the largest hazelnut fields in Azerbaijan, you will be served small patties known as findig chorak or “nut bread.” In its classical form, shakarbura is made in the shape of a crescent, which is no coincidence since the pastry is popular during the lunar waxing and waning as a new moon – and a new month – emerges. Made of yeast dough filled with chopped nuts and pounded cardamom, which gives it a special flavor and aroma, shakarbura is decorated using a special device — maggash. 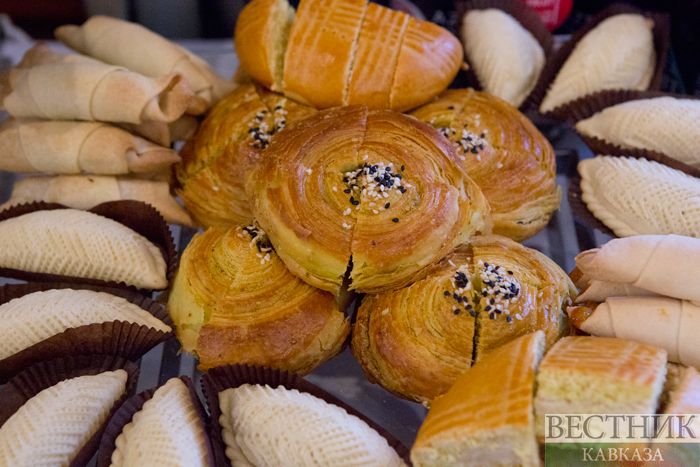 As a symbol of the sun, gogal is a round-shaped bun made of puff pastry filled with a special blend of salt and pounded seeds of fennel, cumin, and turmeric, or sugar — depending on whether it is shor (salty) or shirin (sweet) gogal.

The first one or shor gogal is more popular and beloved in Azerbaijan. If you want to get the full taste of this pastry, you must eat it with a cup of sweetened tea, because unlike the other two pastries on this list, shor gogal is not on its own sweet. To make the buns, the dough is cut into long strips, which are then twisted into a roll. Then, the filling is laid out in a notch made in the middle of this roll, while the top of the gogal is usually sprinkled with sesame seeds.