Throughout history, fires have led to drastic changes in population patterns, infrastructure, and the course of world events, History writes in the artice 7 Fires That Changed History. Here are seven fires that changed history.

1. The Burning of the Great Library of Alexandria

The Library of Alexandria was part of The Mouseion (“Temple to the Muses”) at Alexandria. It contained incalculable wealth: The knowledge of the ancient world, stored in half a million scrolls from Assyria, Greece, Persia, Egypt and India. Scholars from around the globe traveled there to study and work, including Euclid and Ptolemy. The library was built under the rule of Ptolemy I Soter, a general of Alexander the Great and the founder of Ptolemaic Egypt, in 283 B.C.

The library’s destruction was so dramatic it has been immortalized by playwrights from William Shakespeare—“Play conqueror all you want, Mighty Caesar…But neither you nor any other barbarian has the right to destroy one human thought!”—to Tom Stoppard: “The enemy…burned the great library of Alexandria without so much as a fine for all that is overdue!” The fire that destroyed it is cloaked in controversy. Plutarch claims Julius Caesar started the blaze when he set his ships on fire in the harbor while trying to wrest control of the city in 48 B.C. Most scholars believe a branch of the library survived in the temple of Serapeum, only to be destroyed in 391 B.C. by Theophilus, bishop of Alexandria, and his Christian followers, who later built a church on the site. Regardless of who is to blame, priceless scrolls containing ancient knowledge were lost to history forever.

2. The Great Fire of London

The California wildfires of 2020 aren’t the first conflagration to strike during a pandemic; The Great Fire of London raced through the city during the Black Plague and destroyed over 13,000 homes, leaving 100,000 people homeless. From September 2-September 6, 1666, the fire gutted the majority of the medieval city and damaged iconic buildings like St. Paul's Cathedral. People fled with as many belongings as they could carry, including diarist Samuel Pepys, who escaped at 4 a.m. in his nightgown in a cart, writing: “Lord! to see how the streets and the highways are crowded with people running and riding, and getting of carts at any rate to fetch away things.” 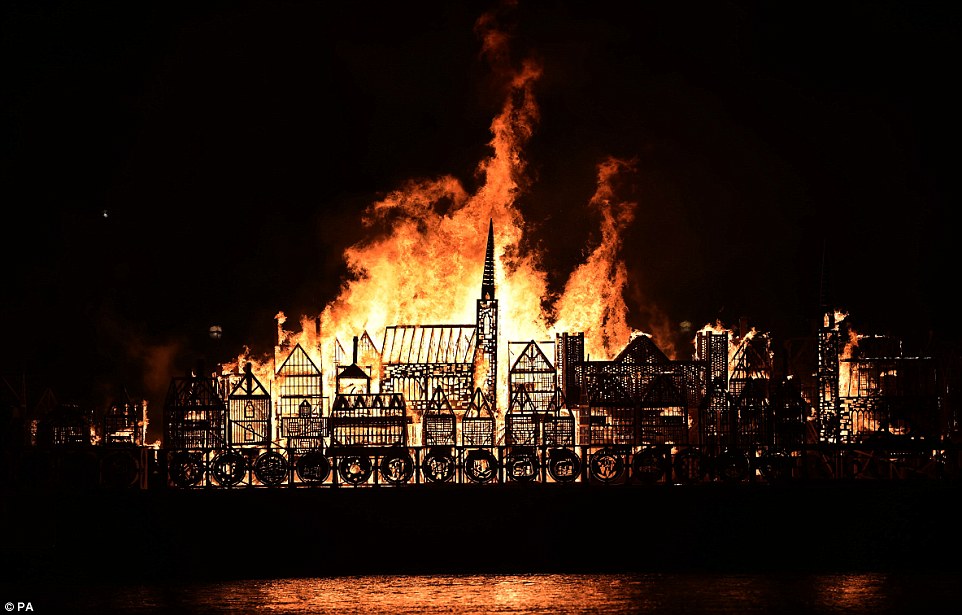 Rebuilding London took over 30 years, but the city planning of Sir Christopher Wren can still be seen today in the city’s stone buildings and wider streets, which replaced the narrow alleys and wooden structures the fire had claimed. The London fire also gave birth to two brand-new industries: modern property insurance and fire brigades.

3. The Great Fire of New York

The Great Fire of 1835 occurred in the midst of a cholera epidemic in New York City. On the bitterly cold night of December 16, 1835, a downtown warehouse caught on fire. Strong winds fanned the flames, leveling over 17 city blocks and setting part of the frozen East River on fire as turpentine leaked from storehouses onto the water. The city’s water supply was woefully inadequate for slowing the destruction. New York City’s population had grown 60 percent in the past decade thanks to robust trade along the Erie Canal, and access to proper sanitation and clean water was lacking. 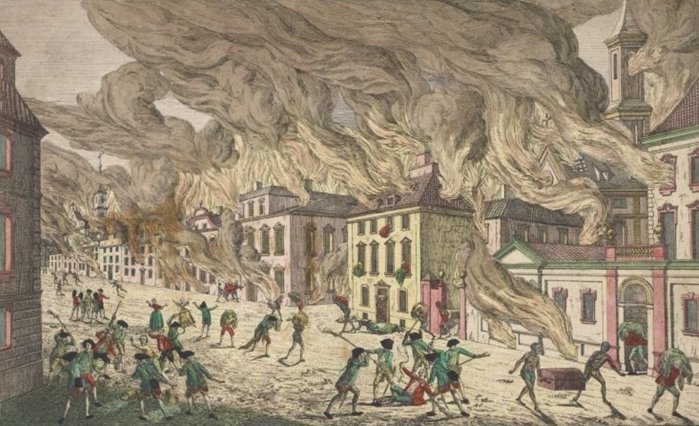 From the ashes rose innovation: the building of the Croton Aqueduct in May 1837. “It brought in 12 million gallons a day, which gave firemen what they needed to fight flames and delivered a pure source to homeowners and businesses—something desperately required in a city battling persistent pandemic,” says Dan Levy, author of the forthcoming Manhattan Phoenix. “It revolutionized American water systems and became a training ground for a whole generation of American engineers, who would go on to create the nation’s aqueducts railroads, and canals.”

The Great Chicago Fire lasted from October 8 to October 10, 1871. It left 300 people dead and over 90,000 homeless. A third of the city was destroyed. “Since Chicago was at the center of the nation’s telegraphic network, which was recently linked to Europe, the great fire was the first instantaneous international news event,” says Carl S. Smith, author of Chicago's Great Fire: The Destruction and Resurrection of an Iconic American City. 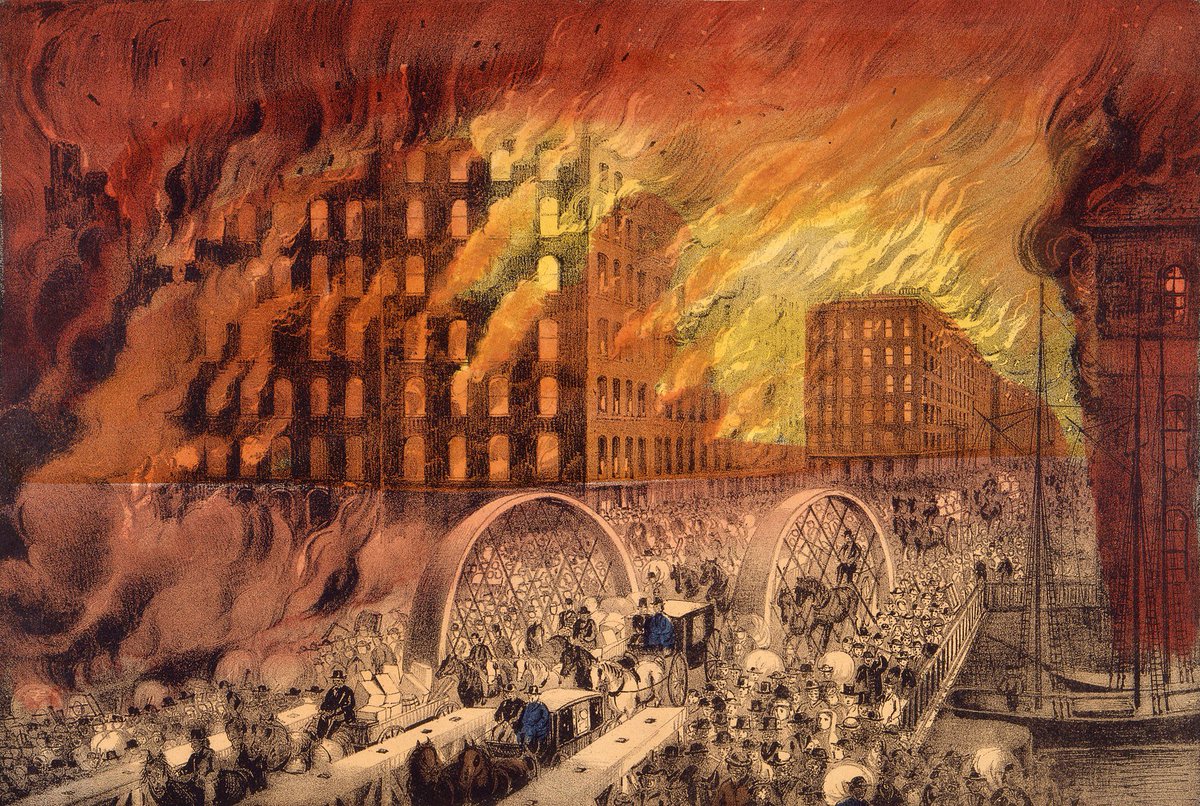 "The Great Rebuilding" that occurred in the fire’s wake transformed Chicago and made it a new, powerful hub for business. Over $10 million was donated to the community. “This was soon accompanied by a great deal of capital investment,” says Smith, “since Chicago’s crucial position between the natural resources of the American hinterland and the consumer appetites—for grain, meat, and a wide range of other commodities and goods— of the East and Europe made its rebuilding a high priority and a sound investment for investors.  The fire became critical to the image of Chicago as the embodiment of the irresistible force of modernity in America.”

The Triangle Shirtwaist Factory Fire on March 25, 1911 killed 146 employees of the Triangle Waist Company who were trapped in the Asch Building in New York City’s Greenwich Village. Many leapt to their deaths in twos and threes or perished in droves by locked exits. “Everybody who jumped was killed. It was a horrifying spectacle,” said eyewitness Frances Perkins. Most of the victims were young women and immigrants, many of whom had come to the United States in hopes of a better life. 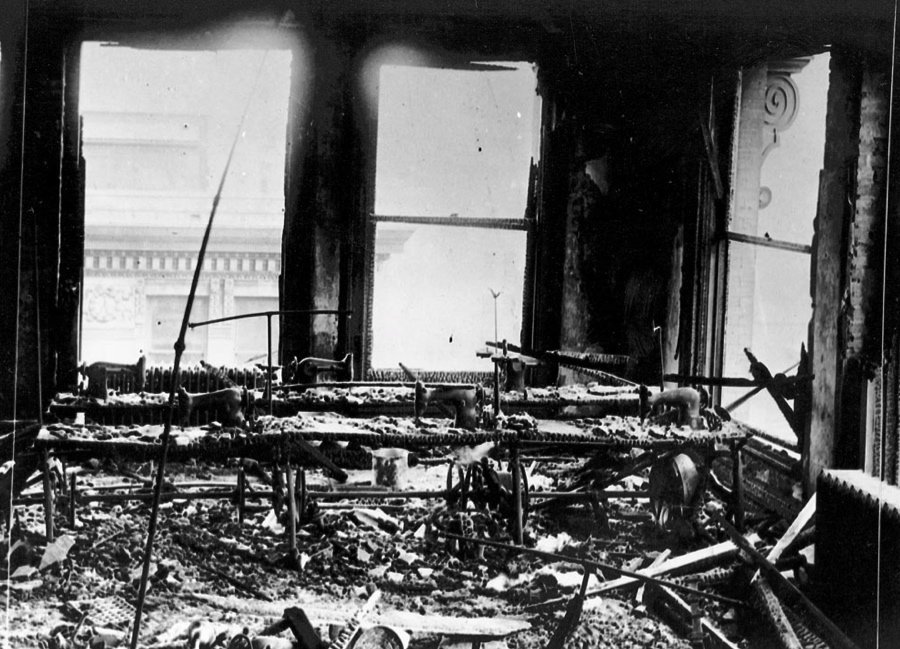 The fire united organized labor, and public outcry over the incident pressured the national government to take action to protect workers, leading to new workplace safety laws. Perkins was so outraged that she devoted her life to defending workers’ rights. She went on to help set up the Factory Investigating Commission and eventually became Franklin D. Roosevelt’s Secretary of Labor during the New Deal, transforming the landscape of work in America.

Arsonists set the Reichstag, the seat of German parliament, on fire on February 27, 1933. Adolf Hitler, a rising politician who had just been named Reich Chancellor a month earlier, blamed communists for setting the blaze. “The Reichstag fire was crucial to Hitler’s consolidation of power,” says Benjamin Hett, professor and author of Burning the Reichstag. “It supplied a pretext for an emergency law—known informally as the Reichstag Fire Decree—which tore the democratic Weimar constitution apart and put an end to freedom of speech and assembly, privacy of the mail and freedom from arrest without charge. 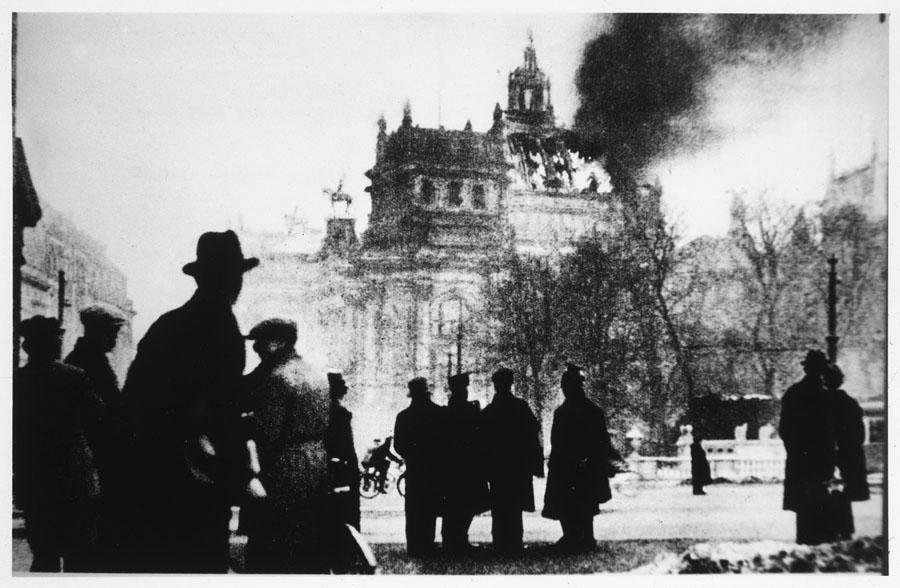 A bit less well known, but crucially important, is that the decree allowed Hitler's Reich government to take over the government of any of Germany’s federal states that wasn’t ‘maintaining order.’ Some of the state governments were in the hands of determined opponents of the Nazis, so this power was critical,” Hett says. To this day, the identity of the arsonists remains in dispute.

John D. Rockefeller’s first oil refinery was built along a stream that fed into the Cuyahoga river. While Rockefeller’s Standard Oil was dumping gasoline into the river, it was also being used as Cleveland’s sewer. The river burned nine times between 1868 and 1952. The fire that broke out on June 22, 1969, was relatively small compared to the previous fires, but with one critical difference: “Many rivers were severely polluted during the 1960s, but the Cuyahoga River caught on fire just as the national media began to cover the environment as a serious issue and just as there was growing national public recognition of the urgent need to protect the environment,” says John H. Hartig, Ph.D., Great Lakes Science-Policy Advisor, International Association for Great Lakes Research. 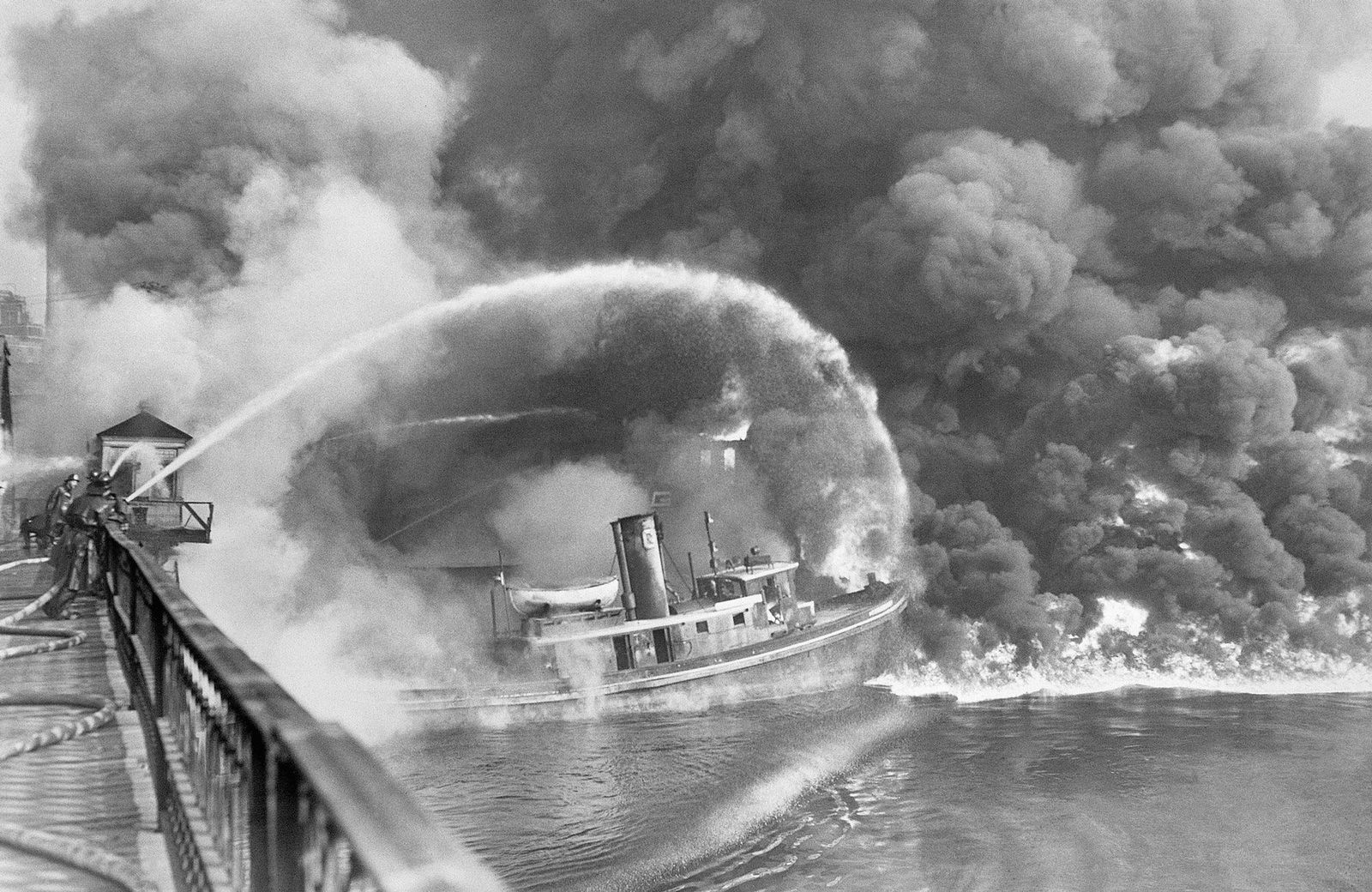 “The Cuyahoga fire and other environmental disasters like the 1969 Santa Barbara oil spill became national symbols of industrial indifference and the weakness of public regulation. The environmental movement needed a rallying point and the burning Cuyahoga River became its poster child,” said Hartig. Time magazine profiled the Cuyahoga River in the same issue as the moon landing and Ted Kennedy’s Chappaquiddick scandal, delivering the story to eight million readers. The public reaction to the 1969 Cuyahoga River fire helped lead to the creation of the Environmental Protection Agency and critical environmental legislation like the 1970 National Environmental Policy Act, the 1972 Clean Water Act, the 1972 U.S.-Canada Great Lakes Water Quality Agreement and the 1973 Endangered Species Act.