The Caucasus without a Cap

Global warming has caused the total area of more than 600 Greater Caucasus glaciers to drop by approximately 16%, according to an international research team that includes Stanislav Kutuzov, geographer from HSE University. As EurekAlert! writes, glaciers without rock debris coverage have decreased more than those with debris coverage.

The area covered by Caucasus glaciers is decreasing by about 0.5% annually; this loss is quite significant. Over roughly three decades, the area has decreased from 692 km2 to 590 km2 according to a study covering 659 Greater Caucasus glaciers from 1986 to 2014. The study used satellite images made in 1986, 2000, and 2014 (Landsat and SPOT satellite systems). Ice reacts to climate change and, most strongly, to growing air temperatures in summer, Stanislav Kutuzov explained. The latter has increased by 0.5–0.7°С over the last 30 years in the Caucasus mountains. Meanwhile, it appears as though supra-glacial debris – pieces of rock of various size – is also impacting the melting. The area of glaciers that are not covered by debris has shrunk more, according to the study.

The glacier flow takes away rock debris from the mountains. Debris is an important component of the glacier mass balance, which is the difference between incoming and outcoming mass of snow and ice. In other words, the glacier mass is impacted not only by ice and snow, but also by rocks that get into the ‘bed’ of the ice flow. For example, a thin layer of debris on the glacier activates melting thanks to decreasing albedo – the ice’s reflecting capacity. On the other hand, thick debris slows down the decrease in the glacier area.  On the one hand, when glaciers become dirtier and darker, they start melting faster, although a considerable amount of rock debris serves as a cover that preserves the glaciers. Some of the Kamchatka glaciers are not melting despite climate change, as they are covered with volcanic rock. ‘The glacier is sealed, as in a fridge, and even starts moving down,’ the glaciologist explained.

Moving Ice: The Danger of Rockfalls

People need to understand what is happening to glaciers in order to forecast changes in territories’ water balance. This is particularly relevant for regions where melting glaciers are a source of fresh water. ‘In the Caucasus, melting glaciers do not impact the water supply as strongly as in tropical Andes or Central Asia, for example, where melted glacier water is an important resource,’ the researcher explained. ‘Here, rainfall and snowfall have a bigger impact on the water flow. But, of course, the water balance is changing, and the flood minimums and maximums are shifting.’ In addition, melting glaciers may provoke dangerous natural phenomena.

Streams from glaciers may also lead to evolving and bursting lakes, as well as mud flows. Bursting lakes mean a spontaneous outburst of water due to wash-out of the moraine ridge. Most often, this happens to proglacial lakes. They evolve in proglacial valleys, where moraine ridges hamper the water runoff. And if the moraine ridge is destroyed, for example, due to a rock fall, a split-off of a big glacier fragment, or intensive rainfall, the water rushes down. This way mud flows evolve, which may cause destruction down the valley. Kutuzov says that this also happens in the Caucasus. For example, due to a burst of the Bashkara proglacial lake in September 2017, three people died and almost 8,000 were cut from the rest of the world in the Elbrus region.

Today, glaciers in the Caucasus are shrinking fast, even faster than in the Alps. Comparison of these two mountain regions is not a coincidence. The Caucasus and the Alps are very similar in terms of their geographical position, area, and type of glaciation. Melting has increased over the last two decades. According to RAS Institute of Geography, this can be explained by increased summer temperatures and ‘increasing incoming solar radiation (thanks to changes in circulation and predominating anticyclones in summer), while precipitation remains the same,’ Kutuzov said. Less obvious factors have also been considered. Analysis of ice cores from Mount Elbrus has shown that the amount of dust transferred to the Caucasus from Middle Eastern and Sahara deserts has increased. This may also foster the melting of snow and ice.

The Caucasus under Cover

The Caucasus glaciers are getting ‘dirtier’ as the layer of debris grows. From 1986 to 2000, their moraine cover area has expanded from 48 km2 in 1986 to 55 km2 in 2000. By 2014, it was about 80 km2. Meanwhile, the moraine-covered area grows heterogeneously. Northern slopes accumulate much more debris. This is probably due to different positions of glaciers on the southern and northern slopes of the Greater Caucasus, Kutuzov said. Southern slopes tend to have smaller glaciers with much steeper surfaces. Glaciers on the northern slopes are less steep on average, longer and reach lower altitudes than the south-facing glaciers, hence gathering more debris in the valleys. But in relative terms, small glaciers of southern slopes, which are cleaner, decrease faster. It looks like the thickness of the debris layer is impacting the ice melting.

Moraine cover is an important factor in the models calculating the glacier mass balance and areas of glaciation in the context of climate change. This factor should be taken into account not only for the Caucasus, but for the other regions as well. Today, ‘it is almost out of consideration: usually, only one parameter of the supraglacial debris cover is set, and the model is calculated for a hundred years ahead,’ the expert said. The data received by the scholars in the Caucasus show that the model should be more complicated. ‘More supraglacial debris make glaciers melt faster, but then, when there is too much debris, it secures the glacier,’ the researcher said. The maximum effect catalysing the melting is present in thin moraines (less than 5 cm). With layers over 0.5 m, the surface melting virtually discontinues, and daily temperature variations do not reach the ice. 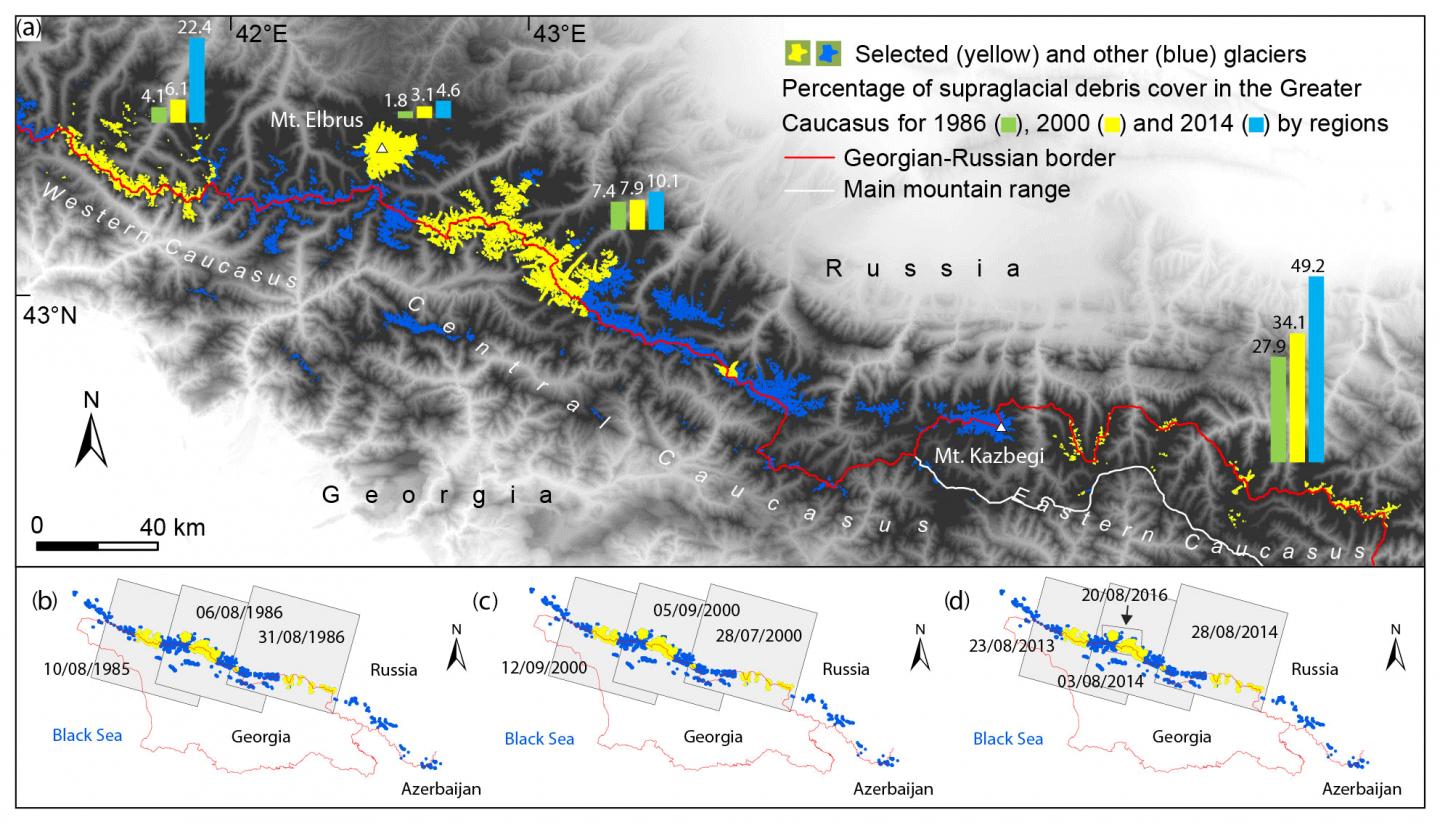 4595 views
later
Is it possible that you had the coronavirus earlier this year?
previous
Russian aid to Italy leaves EU exposed