The remote hideout of the World Bank

Shimmering white and gracefully statuesque, the Mount Washington Hotel is a manmade anomaly among the raw wilderness of the surrounding White Mountains in remote northern New Hampshire. As BBC writes, this elegant Gilded Age hotel stands in Bretton Woods at the foot of mighty Mount Washington, the highest peak in the Northeastern United States and the pinnacle of the White Mountains’ Presidential Range that fans out around the hotel.

“It’s a granite fortress,” said Craig Clemmer, the hotel’s director of sales and marketing, as we looked onto “The Whites” from the hotel’s verandah. “Even to this day, the hotel is geographically secured by the mountains that surround the valley. You could easily cut access to the area by blocking the road at Crawford Notch to the south, and what is now the intersection of Route 302 and Route 3 to the north. It is surrounded by 800,000 acres of White Mountain National Forest. Who’s going to hike through that?”

This, Clemmer explained, was the main reason why the Mount Washington Hotel was chosen for a secret World War Two meeting – a meeting that shaped present-day global economic policies. As the summer of 1944 began, WW2 still raged around the world, but the successful Normandy D-Day landings in June gave the Allied forces confidence of victory against the Axis powers. Though the war was a year away from ending, Allied world leaders were already planning a united global economic restructuring. 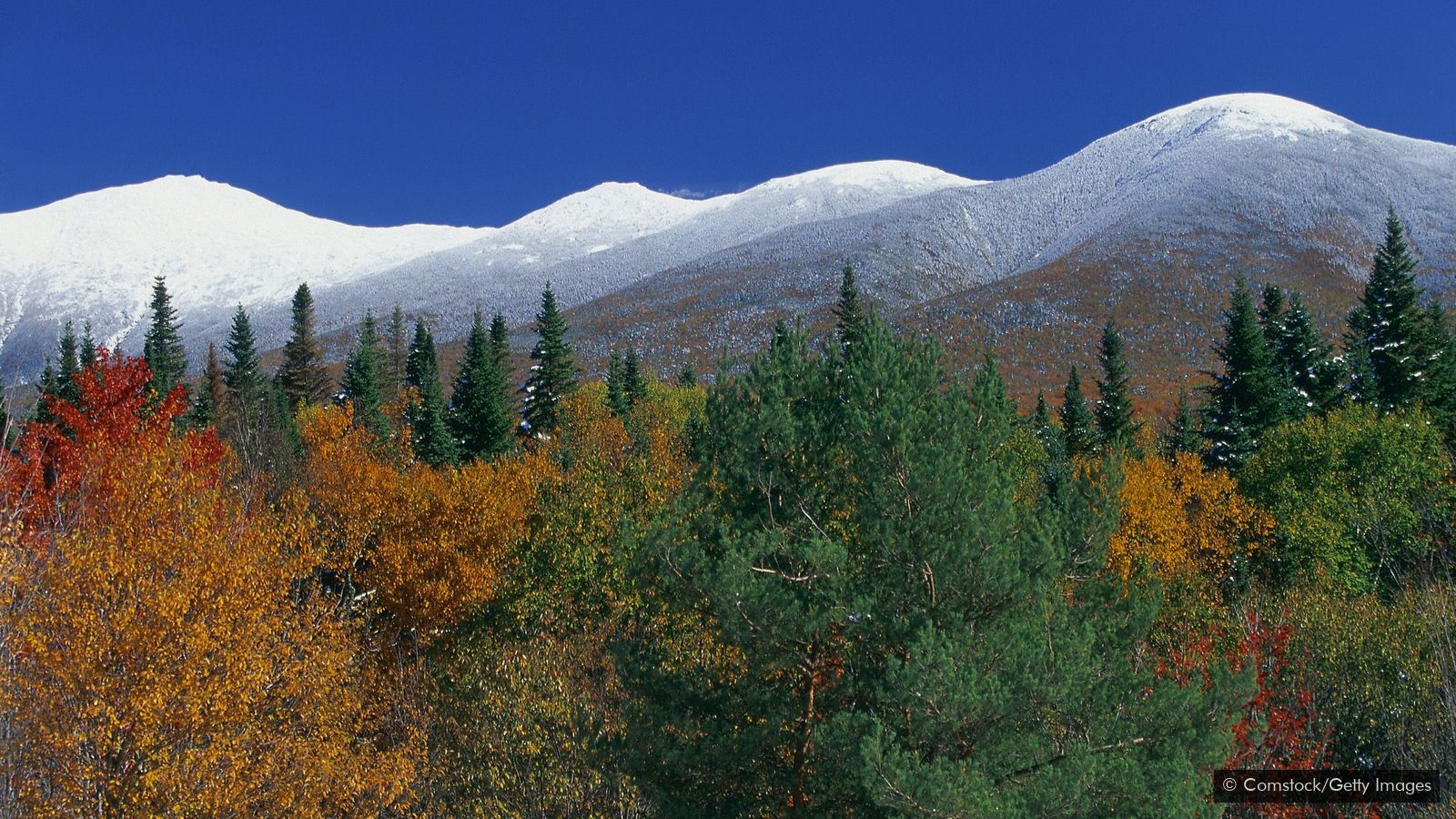 That July, representatives from 44 Allied countries secretly met here at the Mount Washington Hotel to hash out a framework for post-WW2 international economic cooperation. That meeting, the United Nations Monetary and Financial Conference, also known as the Bretton Woods Conference, resulted in the formation of The International Monetary Fund (IMF) and the World Bank, creating the first set of rules for maintaining global economic stability. In times of international economic upheaval, the IMF, which is located in Washington DC, and now numbers 189 member countries, comes into the news. The principles laid down in the White Mountains in 1944 steered much of the world back to massive prosperity after the 2008 recession, for instance; while 2020 has brought another challenge: the Covid-19 pandemic economic recovery.

The principles behind the IMF are based on British economist John Maynard Keynes’ ground-breaking theory of increased government expenditure and lower taxes to stimulate consumer demand, which successfully countered the Great Depression in the 1930s. Under direction from US President Franklin Delano Roosevelt and British Prime Minister Winston Churchill, Keynes, US Secretary of the Treasury Henry Morgenthau Jr and US Treasury official Harry Dexter White convened at the Mount Washington Hotel with 730 delegates in tow.

For three weeks, the delegates argued and honed a complex set of economic tenets that became The Bretton Woods System, which included formation of the IMF and The International Bank for Reconstruction and Development, and its lending arm, the World Bank. Finally, an accord, the Bretton Woods Agreement, was signed. The Bretton Woods Agreement wasn’t ratified until 1946. After all, there was a war to be won first. The only member country from the conference that did not ratify at the final signing in Savannah, Georgia, was Russia – a significant split that paved an isolationist path still trod by Russia today. 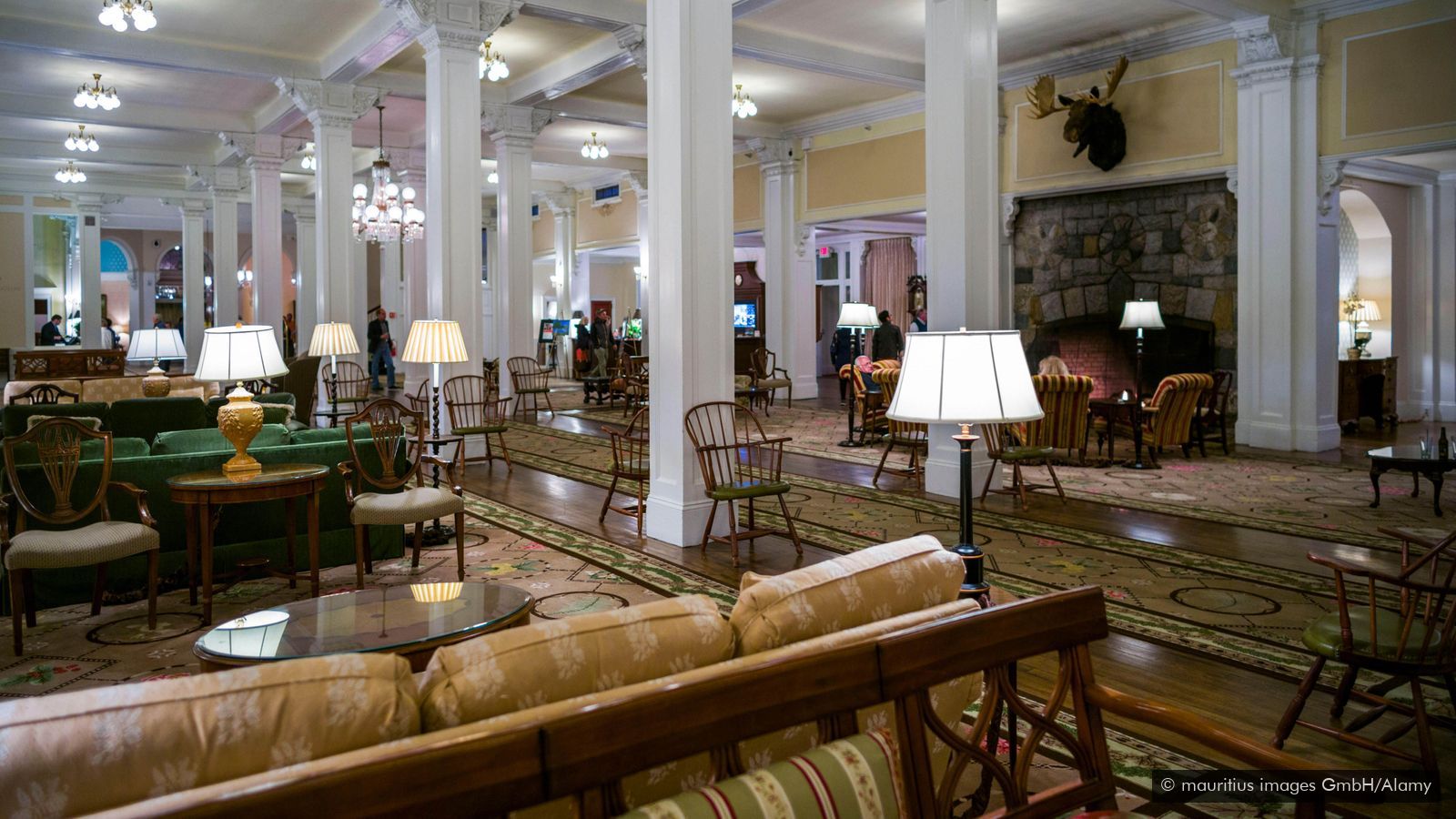 Economists still gather at the Mount Washington Hotel for summits and lectures, marvelling at what was achieved here and mingling with holidaymakers. The small Gold Room, where the Bretton Woods Agreement was signed, includes delegate photos and the brass nameplates from their rooms. Though some extension leaves are missing, the table used at the signing is preserved, surrounded by the very chairs the delegates sat upon to make their mark.

In the adjacent Grand Ballroom, from 10:00 until 15:00 every day, delegates listened to Keynes’ theories and heard arguments back and forth. In between those rooms are the stairs where Keynes collapsed after a heart attack.

“He just carried on with the conference,” said Clemmer, who admits to being an avid amateur historian and tags along on the hotel’s daily historical tours whenever he can. “Keynes had that stiff upper lip British attitude,” he added. 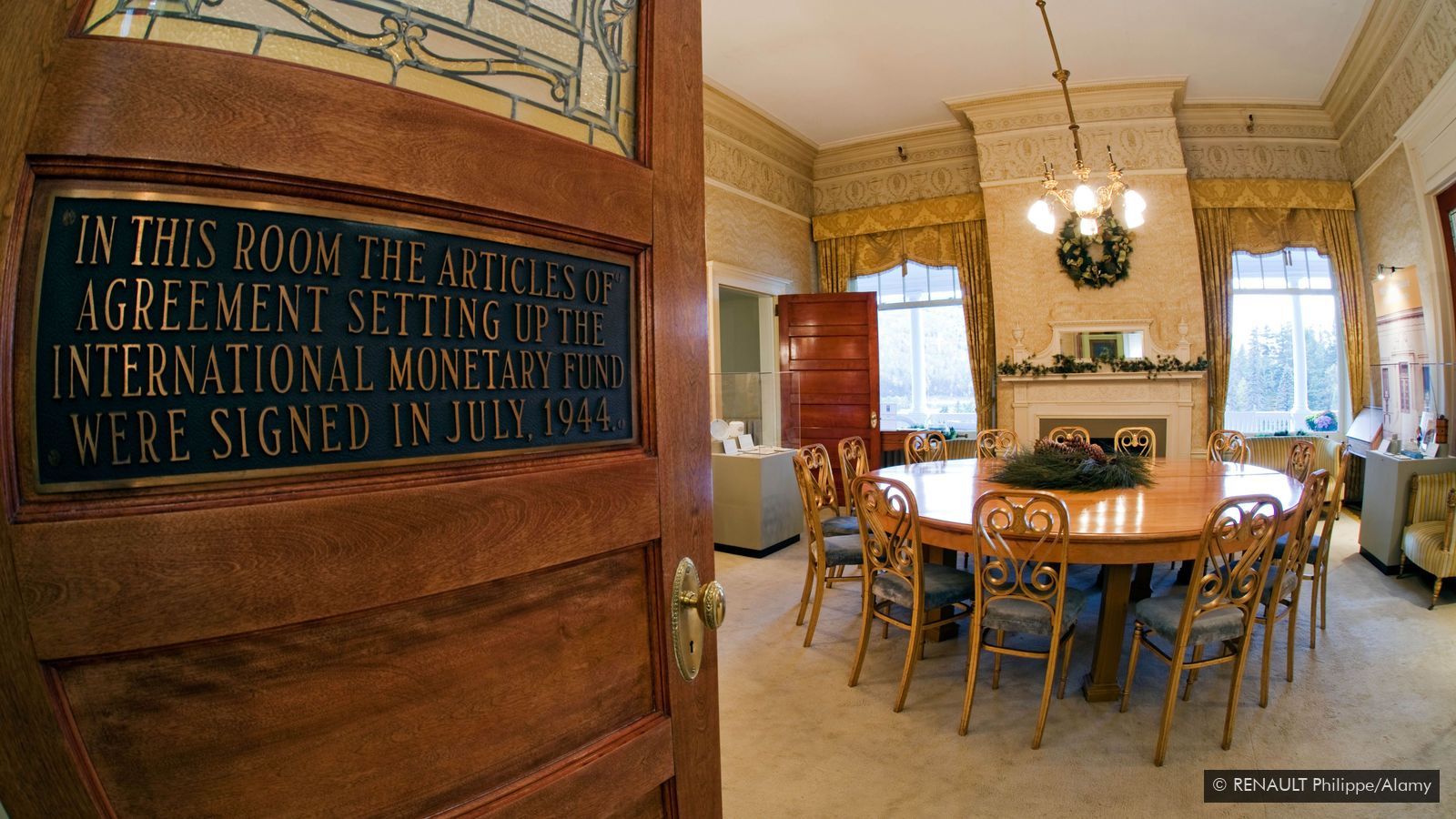 In 1944, after two years of closure due to the war, the US government booked the entire hotel for the conference. It was decided the building needed sprucing up, though: armed with gallons of white paint, government contractors were told to paint everything white to make it look new.  “Even the Tiffany-style glass-and-brass chandelier fittings,” noted Clemmer. “‘If it doesn’t move, paint it white’ was the order.”

This century has seen this grand dame restored throughout to her Gilded Age glory days. Well, almost: “There is one brass fitting left painted white as a reminder,” Clemmer pointed out near the ballroom. 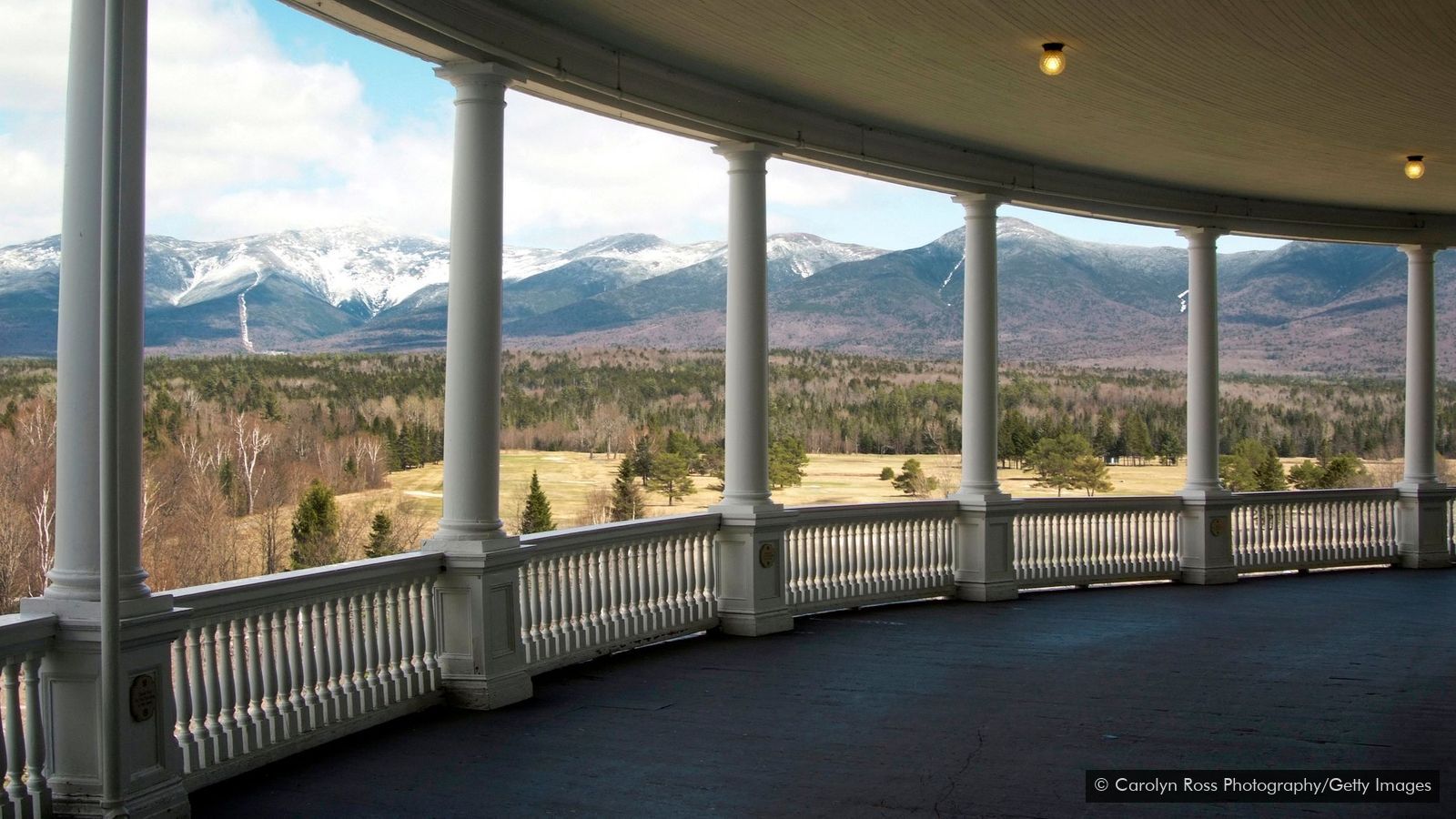 The hotel is now part of the Omni Mount Washington Resort, which includes a chic spa, extensive golf course, 464-acre ski area (New Hampshire’s largest) and the Bretton Woods Canopy Tour zip line, which puts visitors high up in old growth hemlocks. Abundant mass leisure is undoubtedly a product of post-WW2 economic stability whose foundation was laid at this hotel. In the summer of 1944, world leaders weren’t looking for a holiday here, however. The conference’s location was very carefully chosen. Secrecy and security was one thing, but the Mount Washington Hotel also had the capacity to accommodate the delegates and a full complement of secretaries, security and valets.

Also, the rise in anti-Semitism in the US in the late 19th Century, following mass immigration of European Jews, had given rise to greater discrimination. Unlike some resort hotels that didn’t allow Jewish guests, the Mount Washington Hotel was inclusive for Jewish members like Morgenthau and White. And, there was that famed fresh White Mountains air, too. “Cool summer nights in July before air conditioning was very appealing,” said Clemmer. “One of my favourite quotes about choosing a location for the conference is from Keynes who said something like, ‘For the love of God, please don’t send us to Washington DC in July because we will all truly perish’.”