What should be expected from Putin-Erdogan meeting?

The Kremlin has officially confirmed that tomorrow Vladimir Putin will meet with Turkish President Recep Tayyip Erdogan, who will pay a working visit to Russia. The leaders of the two countries will discuss the problems of the Syrian settlement, taking into account the current aggravation of the situation in the Idlib de-escalation zone.

The orientalist Andrei Ontikov commented on the upcoming talks to Vin an interview with estnik Kavkaza: “I would like to hope that it will be possible to agree at least in some particulars, because in my opinion it is impossible to agree on a comprehensive solution to the Idlib issue. We can agree on freezing the situation and suspending the fighting "However, the suspension of hostilities will be a concession on the part of Russia, which should receive something in return."

Regarding the role of the United States, Ontikov recalled: “The Syrian conflict began with the actions that the United States took: supporting the so-called peaceful opposition, peaceful protesters (although they were not peaceful at all). The American role in the UAR is extremely negative from the beginning. If we talk about Idlib , then the Americans will not take any active steps to support Turkey, they will express concern about what is happening, they will say that they support Turkey, but only in words, since the Americans have two goals in Syria: the exploitation of oil x deposits and Israeli security. Idlib does not refer to one or to the other end. The only thing that the Americans will try to do is make great confusion, a greater discord in Russian-Turkish relations and to try to exploit the situation around Idlib to reinforce these contradictions. " 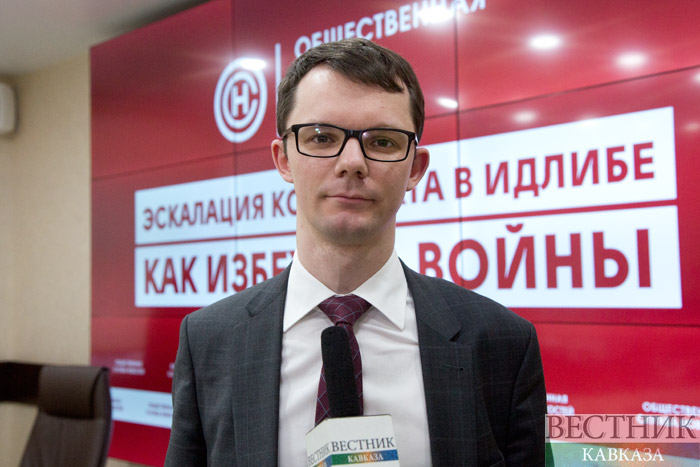 On the sidelines of the press conference “The escalation of the conflict between Turkey and Syria: how the aggravation in Idlib will affect Russian-Turkish relations,” Ontikov also noted that now the Americans are in areas east of the Euphrates, they feel quite calm there, while Russian and American normal coordination is established, they are sympathetic to the conditions in which they work. About two or three weeks ago, an American patrol drove in the area of ​​the city of El-Kamyshly, deviated from the route for some reason and drove into the village of Harbat-Khamo, where it was attacked by the local population. The situation was developing quite seriously. As a result, the Americans got in touch with the Russian group, our military police drove up, and this whole situation was resolved. And if the Americans "get" into the Idlib zone, then coordination will be disrupted. "

Speaking about the EU’s position, the expert expressed the opinion that Europeans look at what is happening only from the point of view that Turkey is blackmailing Europe with the refugee problem: “This blackmail is an attempt to connect Europeans and form a front to put more pressure on Russia.”