The UN has marked 21 March as International Nowruz Day — a celebration of spring and the connection between humans and nature. Here, we look at the similarities between, and peculiarities across, the nations that commemorate this ancient rite, National Geographic writes. Every March, 300 million people from across the world take part in celebrations that involve leaping over bonfires, performing folk music and reciting poems, cleaning every inch of their homes and eating copious amounts of home-cooked food in the process. Nowruz, commonly known as Persian New Year, is a commemoration of spring and fertility, and marks the overcoming of sorrow and darkness. It’s celebrated not only in Iran, but in the likes of Azerbaijan, Afghanistan and countries across Central Asia, as well as their diasporas around the globe.

Nowruz, which means ‘new day’ in Farsi, marks the first day of the Persian calendar and falls at the same time as the spring equinox (usually on 20 or 21 March). Although it’s a secular holiday, it’s widely believed to be rooted in Zoroastrianism — one of the world’s oldest monotheist religions, dating back 3,000 years and preceding both Christianity and Islam. The Muslim conquest of Persia in the seventh century led to Zoroastrianism being slowly eradicated, but its fundamentals — including a deep reverence for the four elements of nature — stayed put and birthed this public holiday still celebrated by millions across the Muslim-majority region.

Although the principles of Nowruz are the same, each country weaves in its own unique traditions — and spells it slightly differently. In 2016, it was added to UNESCO’s Representative List of Intangible Cultural Heritage of Humanity, recognising a celebration that’s withstood, quite remarkably, three millennia of changing regimes and religions.

In Iran, it’s a bedrock of tradition and culture

Nowruz is Iran’s biggest holiday and a momentous time across the country. It usually kicks off with a spring-cleaning ritual called khane tekani, which translates to ‘shaking down the house’. Once the home is in order, on the last Wednesday before Nowruz, Iranians light up the streets and skies for Chaharshanbe Suri, or ‘Red Celebration’, in honour of all things fire — an element Zoroastrians believe to be a symbol of purity.

People set off endless fireworks, jump over bonfires (to symbolise renewal of life) and release sky lanterns fille­­­d with their hopes and dreams for the year ahead. The new year is usually announced by Haji Firooz, a fictional, tambourine-playing character with ambiguous origins. In cities like Yazd and Isfahan, a festival called Sadeh honours fire for the 50 days and nights that precede Nowruz.

And when it comes to celebratory food, there’s an abundance of it. Traditional Nowruz dishes include kookoo sabzi (a herb frittata) and sabzi polo ba mahi (a herby rice dish with white fish).

But perhaps the most symbolic observance is haft-sin, the custom of setting a table with seven items beginning with the letter s (seven is believed to be a lucky number). This can include sabzeh (sprouted lentil or wheat), which symbolises rebirth; seer (garlic) for good health; serekh (vinegar) for patience; seeb (apple) for beauty; and samanu, a sweet paste made from germinated wheat that’s a Nowrouz staple in every celebrating country. The display also traditionally features a goldfish (representing life), a mirror, candles and a holy book.

For Azerbaijanis, it’s a nod to their fiery past 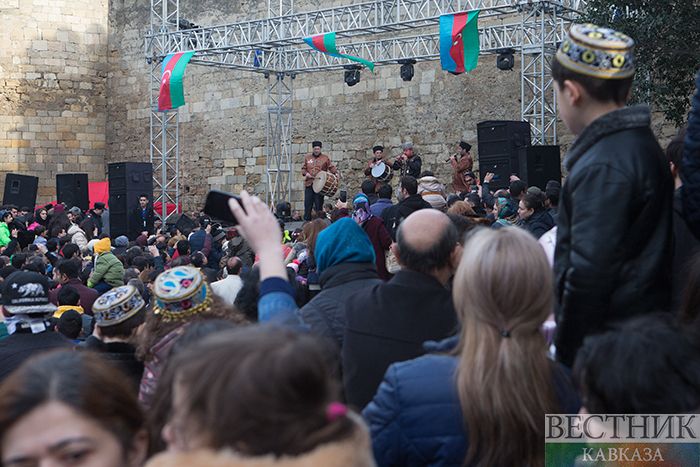 Reminders of Azerbaijan’s Zoroastrian past are everywhere in the country, whether in its fire temples, burning hillsides or flame-shaped skyscrapers. Although ‘Novruz’ was stifled here under the Soviet regime, families continued to celebrate in secret, and today, it’s the most joyful date on the Azeri calendar. Festivities start early — the four Tuesdays in the run-up to Novruz celebrate the four elements: water, fire, earth and air.

Throughout this period, families gather to make traditional pastries like paklava, shekerbura and goghal (representing the stars, moon and sun, respectively), as well as savoury staples like plov (a saffron-infused meat and rice dish), dolma (vine leaves stuffed with lamb, rice and herbs) and fragrant kebab.

Like Iran, there’s also a table of seven ‘s’ items, which are all centred around the semeni (shoots of wheat tied together with a red ribbon). The holiday is particularly loved by children here, who pass the time by throwing hats at neighbours’ doors before hiding and hoping to return to a hat full of sweets and chocolate.

The country is taken over by street festivals involving traditional song and dance, tightrope-walking and the comical characters of Kecel and Kosa, who theatricalise the struggles between winter and spring. The largest festival of this kind is held in the capital, Baku. Other Azeri traditions include painting eggs; jumping over roaring bonfires; fortune-telling to foresee if and when girls will get married; and visiting the graves of relatives. 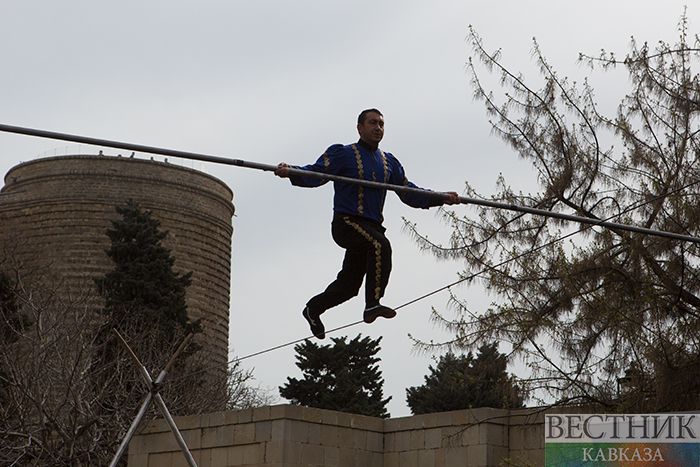 Afghanistan is thought to be the celebration’s spiritual home

For the most part, Afghanistan heralds the new year in a similar way to its neighbours. It’s celebrated predominantly in the north of the country, particularly in the Balkh province, which some believe to be the spiritual homeland of ‘Nowroz’. Although contested, it’s said that Zoroaster, the ancient Iranian prophet who founded Zoroastrianism, lived and first preached in Balkh, one of the oldest cities in the world.

Nowroz was banned under the Taliban regime of the 1990s, who considered it a pagan festival, but many families still celebrated in private. These days, thousands of Afghans head to the city of Mazar-i-Sharif, in the Balkh province, to attend the Guli Surkh festival; Nowroz’s main event, it commemorates the first 40 days of the year, when the green plains are awash with red tulips.

Buzkashi, Afghanistan’s national sport, is a popular custom during Nowroz. It’s somewhat similar to polo, but instead of a ball, the horseback players manoeuvre a headless, disembowelled dead goat. During an Afghan Nowroz feast, expect to find the likes of kolcheh Nowrozi (biscuits made with rice flour), sabzi challow (spinach and lamb curry with rice) and haft mewa, a fruit salad made with seven dried fruits and nuts soaked in syrup. 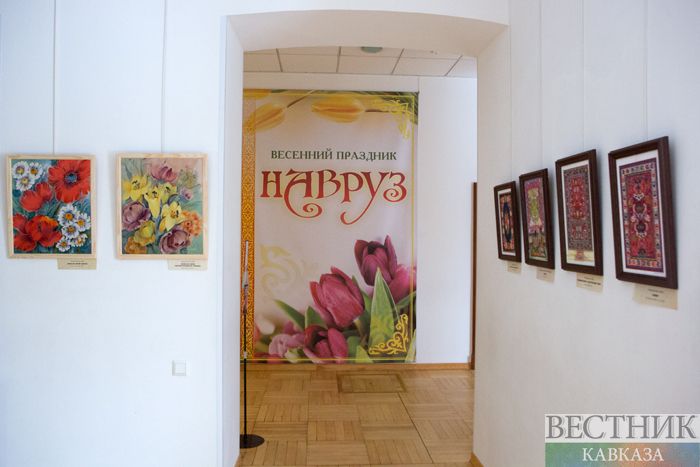 Nowruz is celebrated in all five of the ‘Stans’; Kazakhstan, Tajikistan, Turkmenistan, Kyrgyzstan and Uzbekistan. As in Azerbaijan, festivities in the region were suppressed during Soviet times and it wasn’t until the 1990s that Nowruz was publicly celebrated again. Traditions across the region have similar characteristics (think plenty of food, family gatherings, colourful street festivals and nomadic sports), although they can vary slightly from country to country and sometimes even city to city.

In Kazakhstan, ‘Nauryz’ is marked by the building of felt yurts (traditional nomad houses), in which a dastarkhan (a table of food) is laid out; nauryz koje, a hearty soup made using seven ingredients, is almost always on the table. In Kyrgyzstan, huge vessels of water are brought into the home on the eve of ‘Nooruz’ to symbolise good health. Traditional sports like wrestling, horseracing and board games are all customary when it comes to celebrations in this region.

For Kurdish people, it symbolises identity and freedom

‘Newroz’ is celebrated among the 30 million-strong Kurdish communities across Iraq, Turkey and Syria, as well as the ethnic Kurdish population of Iran. In addition to the general festivities, it’s also a celebration of a Kurdish myth: a blacksmith named Kawa, who defeated the evil King Zuhak and freed his people on the eve of Newroz. As such, the holiday symbolises not only the start of a new year, but also freedom for the Kurdish people, who are the world’s largest stateless group.

In other parts of the world

After the Muslim conquest of the seventh century, most Persian Zoroastrians fled to India. Today, their descendants, the Parsi people, still practise Zoroastrianism and celebrate ‘Navroz’. Other minorities who mark the occasion include the Turkic Uyghur people of China and the Lezgins and Tatars of south Russia, as well as minorities in parts of the Balkans, Mongolia, Pakistan and Bangladesh. Diasporas around the world also host elaborate celebrations, with many to be found in cities across the US thanks to the country’s significant Iranian-American population.