Asiyat Kumratova: "I joined ensemble of song and dance in traditions of Caucasian wedding"

On April 1, People's Artist of Russia, laureate of the Soul of Dagestan Prize, popularizer of the Nogai epic, Asiyat Kumratova, celebrated her 80th birthday. She was born in the village of Ikon-Khalk in the Karachay-Cherkess Autonomous Region and sang folk songs from early childhood. Asiyat Kumratova told "Herald of the Caucasus" about her music and herself.

- Asiyat Suleymanovna, how did a girl from a distant village manage to conquer a professional scene?

- For the development of any business, sometimes two things are enough: sincere love for this business and desperate fearlessness. Fearlessness Nogays, conquerors of the steppes, and indeed all the peoples of the Caucasus, not to occupy. And the love of singing reigned supreme over me all my life. This is now training in vocal skills - the destiny of tutors and professionals, sometimes a very expensive task, and in my time the main tutor on vocals was the fresh air of the mountains, a noisy river and my most devoted and beloved spectators - my aulchans.

Through folk songs, through ancient legends, I discovered for myself and for many the history of my people. Life in the post-war period in the small village of Icon-Hulk today would seem too harsh, but for me it has become a blessed time, the purest and truly magical period in my life. At that time, it was often possible to meet vagrants passing through settlements and asking for alms. Aulchans always helped them, although they themselves did not live richly. It was a harsh time, but people were kind and sympathetic. Once, gathering in the field for grass for rabbits, I heard a voice that flowed as if from the sky, and stopped bewitched. The owner of a wonderful voice was a traveler who passed through our aul - grandfather in dilapidated clothes, with a beard, behind which there was a stick with a ribbon tied to it. He walked slowly along the street and, with his head down, hummed a very beautiful melody. Mom, seeing my eyes, full of either fear or delight from the revelation that opened, invited the traveler to the yard to quench his thirst and rest. He, seeing my burning interest, continued his singing.

As my mother told me, during his singing, goosebumps ran through my body and my eyes glowed like bright stars on a moonless night. That meeting became my starting point - the melody that the traveler sang, I remembered and carried through the years. She remained in my repertoire and became the impetus for a lot of work to restore a whole layer of knowledge about the Nogai culture, about the Nogai people. I put 16 verses into this melody that sank in my heart, which became the song "White braid, black braid". This is a girl’s song about love, about the purity of a girl’s heart, naivety and nobility. The lyrics are a vivid example of true folk art. This collective image is the polyphony of the Nogai people, united by one melody.

- How did you start singing professionally?

- In 1958, I worked at a state farm, where they noticed me and invited me to become a member of the Song and Dance Ensemble of KChAO. Re-registration to a new workplace took place in the tradition of a Caucasian wedding. First, kunaki, an artistic director with artists, came to visit us to talk with my parents and get consent for my participation in a professional vocal and choreographic collective. Parents were initially very skeptical about this, saying that singing and dancing could not earn a living, but they managed to convince them. And so began my creative career. In my workbook was recorded "vocalist of the choir", later I began to sing songs in Nogai solo. Our choir toured throughout the Soviet Union and beyond - in Poland, Bulgaria, France and Italy. 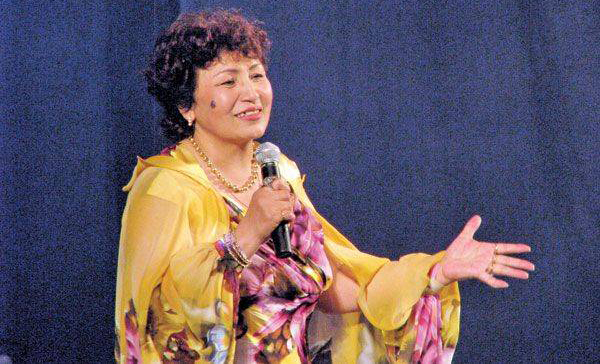 - How did you come to historical and social work?

- Your question sounds somehow pompous. I was just lucky that the topic that took possession of my mind and heart was not developed at all. The Nogai epic was not popularized for ideological reasons, in places it was hushed up, in some places it was forbidden. I became a kind of collector of oral Nogai traditions, which were transmitted from great-grandmother to grandmother, from one court to another court. It turned out to summarize a fairly large amount of information, which was subsequently actively used by Nogologists in scientific work.

On the one hand, the epos is an amazing source of knowledge about the people, its history, culture and traditions, on the other hand - beautiful poetry. Probably, a special interest in the epic was formed during my trips to different cities with concerts, where I met thousands of kilometers from my native village names that clearly reported the Nogai root of this toponym. So the idea came up that in the epic the history of the people is hidden without embellishment, without political distortions, but only that the people carry through the centuries in their hearts. Later I took part in the Congress of Turkic peoples, in the Congress of Turkic women.

- What would you like to wish the readers of Vestnik Kavkaza?

- Representatives of all the peoples of our vast country, large and small, should in their families, in their homes, at work - whether you are a doctor or teacher, worker or manager - remember, honor and learn their native language. This is relevant, first of all, for small nations, including for the peoples of the Caucasus. My generation saved for the youth and transferred to paper what was a tradition and was transmitted only verbally. Now the youth must adopt this baton, and build palaces of national culture on the basis of this foundation. We, speaking our languages, have no right to lose what we inherited from our ancestors, the life of the people is directly connected with the life of the national language. Loss of language will inevitably lead to the death of the people. Without knowing the language, it is impossible to know the history of the people, and not knowing the history, it is impossible to call yourself a representative of one or another people.