Ilya Zaytsev: "Thoughts, images and ideas of Nizami are close to everyone"

The "Stories and Images of Nizami" exhibition opened in Moscow today. Its main goal is to demonstrate the continuous tradition of referring to the works of the great poet, as well as how humanistic ideas and aesthetic images of Nizami were understood and artistically interpreted in the culture of Azerbaijan and other countries in the Middle Ages and the new era. Curator of the exhibition, Russian historian-orientalist, Doctor of Historical Sciences, Professor of the Russian Academy of Sciences Ilya Zaytsev told Vestnik Kavkaza about the exposition and about Nizami's ideas.

- This exhibition has a unique concept - the poet's stories appear on different materials: on tiles, on lacquerware, illustrations in manuscripts... How did you manage to illustrate plots from his poems using different artistic means?

- With this exhibition, we not only wanted to pay tribute to the great poet, who turns 880 this year, but also to show how great literature affects other areas of art - fine, decorative and applied art. And the point here is not only that Nizami left us a grandiose collection, so to speak, of plots and images that became a source of inspiration for many artists, but also in the greatness of those ideas that are embedded in his works. These are ideas that are close to us, this is what people still dream about. It seems to me that this is precisely the guarantee that his poems, his work are still popular and are reflected in the work of artists, composers, in general, all creative people.

It is enough to see what our exhibits represent from a chronological point of view: from the XIII-XIV centuries up to the works of the artists of the XX century, who, naturally, worked in the spirit of the European tradition, nevertheless, Nizami's work was very close to them. Let's say, Ravil Khalilov or [Soviet artist, master of woodcuts and book graphics Sergei] Bigos, whose works are also presented. This is an attempt to trace how the work of the great poet gives rise to new meanings and contributes to the creativity of other people. 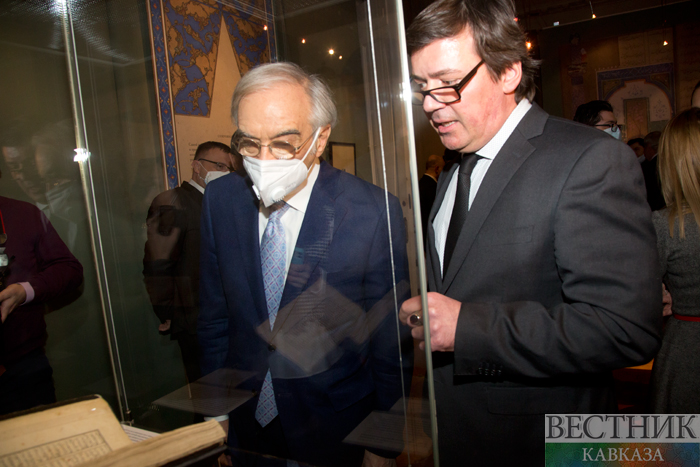 - What ideas of Nizami seem to you the most relevant right now?

- The ideas are very simple, close to the heart of every person: the ideas of mercy, justice, reasonable and just order in society, generosity. These are thoughts, images and ideas that are close to all of us. These humanistic ideas, which were probably not new to him, still excite the minds and people are ready to follow them. In fact, a person from the time of Nizami, it seems to me, has not changed at all in this sense.

- How was the exhibition prepared?

- We have been working on it for about a year in the difficult conditions of a pandemic. We wanted to celebrate Nizami's jubilee, remembering how his 800th birthday was celebrated in besieged Leningrad, in the Hermitage, by people dying of hunger. They found the strength to do this in the winter of 1941. Then two anniversaries were celebrated: the 800th anniversary of Nizami and the 500th anniversary of Navoi. It is very important for us. When preparing this exhibition, we outlined the range of those works, which reflected the plots and images of Nizami. Then this idea grew to show a wide palette of his works on a large material, that is, from the XIII-XIV centuries up to the art of the XX century. It is very interesting. I have a painting by Roerich, who very successfully connects these eras - the medieval and the art of the 20th century. It is deliberately stylized as a miniature, despite the fact that it is tempera, and not even a miniature at all. I don't know how we succeeded, but the idea was to show how great literature gives rise to new meaning and new images. 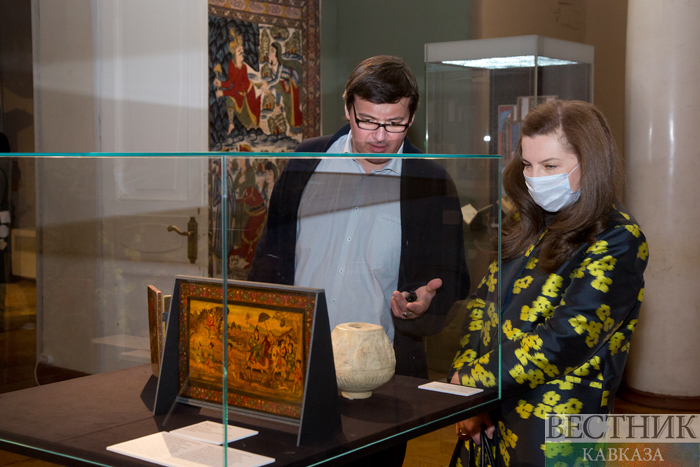 Tamilla Akhmedova and Ilya Zaitsev, Head of the Department of Humanitarian Programs of the Representative Office of the Heydar Aliyev Foundation in Russia, at the opening of the exhibition

- Did you cooperate with Azerbaijan in the preparation of the exhibition?

- The Heydar Aliyev Foundation helps us a lot. We very much hope that in May, after the exhibition closes in Moscow, it will go to Baku and continue to delight the audience at the Heydar Aliyev Center.

We work closely with the Heydar Aliyev Foundation. By the way, here are exhibits not only from the State Museum of the East, but also from the Mardjani Foundation, the State Hermitage, Bigos's graphics - from the State Museum of Fine Arts, the Pushkin Museum. There are also practically never exhibited, little-known things that were identified with the works of Nizami quite recently, from the collection of the Museum-Estate "Arkhangelskoye"; a series of miniatures from the collection of the Saratov Art Museum. Radishchev. All of them perfectly complement this gallery of images.