Irina Kiyanian: "Stereotypes about Iran have nothing to do with real situation in the country"

Interethnic marriages have always been considered the basis of popular diplomacy, interstate interaction in the humanitarian sphere. The interlocutor of Vestnik Kavkaza Irina Kiyanian, who studied at the Faculty of World Economy in Rostov-on-Don, in France on the basis of IPC Paris, as well as at Mod’Art International fashion school. Having married an Iranian, Kiyanyan moved to Iran, where she received her education in tourism. Spouses have opened a counseling center for those wishing to get an education in Russia, as well as organize French and Russian-speaking tours in Iran.

- My first education is translator, I speak five languages, including Arabic and my favorite Farsi. Choosing Farsi, I heard in him some distant, but very dear to my heart notes. Relatives and friends were perplexed towards my choice, but the choice of language based on an inexplicable experience played a decisive role in my destiny. Studying Farsi, interest in the culture of the East became a prologue to my family history.

In 2014, I participated in an exhibition organized by the cultural center of Iran at the Iranian Embassy in Moscow, where I met my future husband. I remember his sincere surprise when we started talking in Farsi. Our next meeting was already in Tehran, where at the Center of Ancient Assyrian Civilization I really felt the fullness of that culture, the language with which I was previously familiar only from textbooks.

In the company of the man who became my husband, I felt completely protected, surrounded by care, affection and love. A new world was opening up for me, and I am very happy that the gate to this world was the most beautiful person in the world - my husband, and the key to this gate was Farsi.

- How are Iranian weddings different from Russian ones?

- The official conclusion of our union (ak - Muslim marriage) was held in Moscow, in the Islamic Center, and we wanted to celebrate a full-fledged wedding celebration in Iran with relatives and numerous guests. However, the circumstances placed - the family was in mourning.

But as a guest I was at Iranian weddings. In Iran, a wedding consists of three parts: matchmaking, engagement, and celebration itself. Young people are allowed to meet only after the engagement, when the date of the future wedding is already set. The wedding celebration itself is luxurious: richly decorated tables, the best outfits, music and fun, which can last up to three days. Men gather in one room, women in another.

After the wedding, the young husband is obliged to provide for his family, and the duties of the young wife include the maintenance of the house and its arrangement. And here the dowry plays a big role.

Iran has strong traditions that regulate many areas of people's lives, but for me, a person of European civilization, it was not difficult to accept new standards of behavior and oriental etiquette.

- My husband and I both work, and we share responsibilities among ourselves. But I do the cleaning in our house, the arrangement of the hearth. The husband does not show initiative in choosing decor items and other things, trusting my taste. But in the kitchen he has no equal, especially when it comes to meat dishes.

- According to Iranian law, a woman, being in public places, must wear a scarf. How long did it take for you to get used to it?

- The dress code in Iran can be divided into two parts. The first includes casual wear: a scarf that is customary to cover the head, tunics or long cardigans. Sleeves should be no shorter than three quarters. In everyday life, manto is popular among Iranian fashionistas - a cross between a light coat and a cardigan. Women's scarves, which are of particular importance in the Arab world, in Iran have a purely decorative function, in addition, the scarf perfectly protects hair from the scorching sun. In my collection there are more than a hundred shawls for all occasions and for any weather.

A more rigorous outfit - chador - is usually worn when attending religious holidays and any official events. Chador is also worn by women in the public service.\ 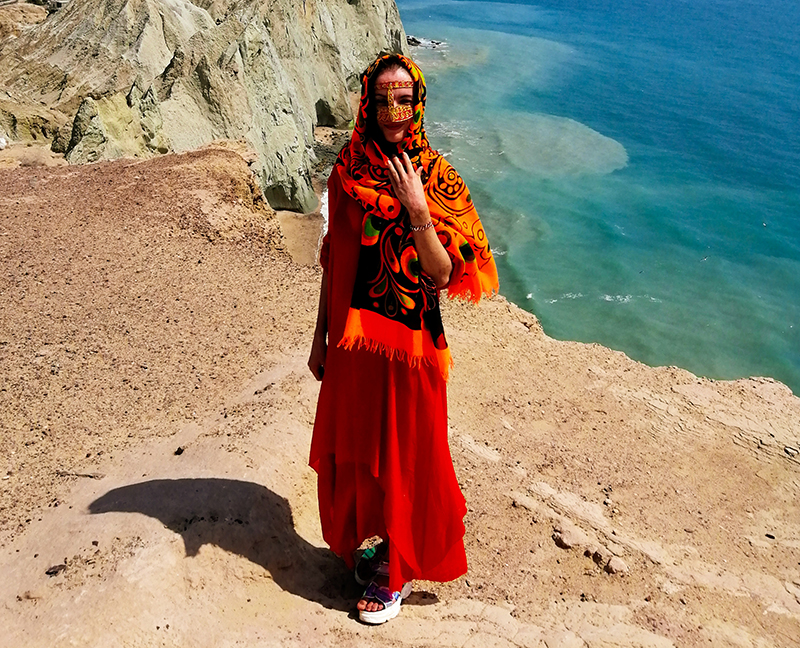 - Is there a separation of places for women and men in public transport? Or other gender-specific features? Did it bother you or cause discomfort?

- Places in public transport are divided: men sit in the first half of the bus, women in the second; and there are male, female, and family cars in the subway.

There are separate schools for boys and girls, and extracurricular activities and electives are held in general classes.

In cities there are restaurants, bars that position themselves exclusively for men or for women, however, if desired, the couple can have dinner together.

- What is the main features of the Iranian mentality?

- It all depends on the social group, age and region, but all Iranians are united by a culture of politeness - taarof. Taarof is a very exotic norm for a European. For example, in a store, the seller may say that the thing you like is free for you. But this is only a gesture of respect and disposition, in response to which the buyer should kindly thank the generous merchant and repeat his question. Only after this, the seller will call the price of the goods, however, in this case too, one should not rush to the calculation - you need to bargain.

Also in Iran, much attention is paid to the respect of elders, here is a truly reverent attitude towards children.

- What do you miss most in Iran?

- Communication in Russian and participation in public life. As a fashion designer, I miss skirts and dresses that are not worn in Iran. Even in the Iranian film distribution there is no western cinema. In cinemas, they show mainly Iranian films.

- How do Iranians relate to Russians?

- The friendship of our countries and peoples has a long history. I work in the tourism sector, and I can say that Russia is a very interesting country for Iranians. In addition to traditional tourist routes to Moscow and St. Petersburg, the Northern Lights tours are gaining popularity for the third year in a row. The name here is quite literal: the inhabitants of Iran are interested in Russian winter, the polar night, a riot of colors of the northern sky.

The three largest universities in Iran have opened departments of the Russian language. There is an exchange of students.

Iran is also of great interest to the people of Russia, because there is everything here: from mountains with snowy caps to the golden desert with caravans and the sea coast.

- How well is the service sector developed in Iran? Do Iranians go to beauty salons?

- The beauty industry in Iran is developed at the level of modern trends. Beauty salons in Iran are not only places for the provision of cosmetic services, but also a platform for business meetings with women. Plastic surgery has been widely developed in Iran; since 2010, Iran has been considered one of the centers of rhinoplasty.

As for fashion, one cannot but mention the deep traditions of the weaving industry. Here are large collections of patterns inherent in Islamic culture, and all kinds of varieties of the most expensive and sophisticated fabrics. The world of the east is a real treasury for fashion designers. Given the patriarchal way of Iranian society, much attention is paid to men's costume, which is not inferior to the best world brands in terms of quality of tailoring, fabric and other subtleties of sewing craftsmanship. Iran's seeming closeness, as well as the imposed sanctions, do not affect the world of fashion, therefore, all Western trends are quickly reflected in Iranian collections, taking into account national specifics.

I myself create collections of expensive clothes based on traditional fabrics, combining modern cut and traditional ornaments, patterned technique. 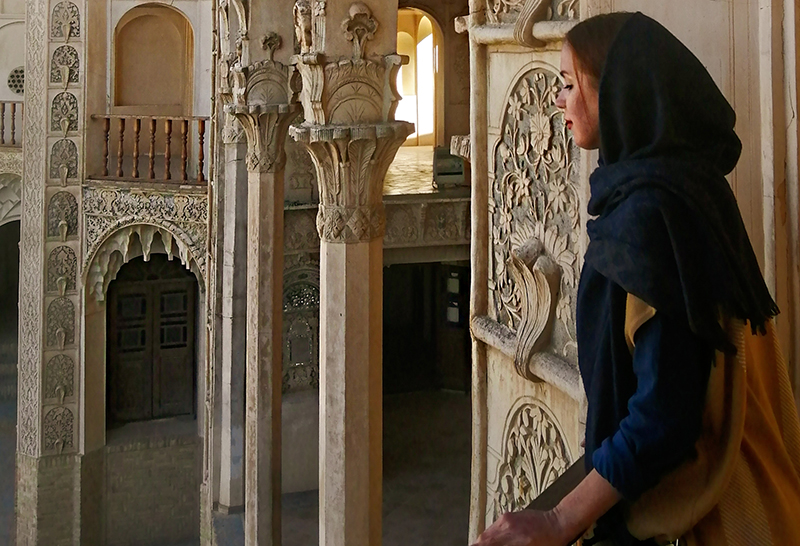 - How many Iranians among your friends have a higher education? What areas of activity are traditionally considered female?

- In Iran, according to statistics, women are more educated than men. Among students, girls predominate. Women in Iran drive trucks, work in education, in politics. One of the most popular professions among women is the doctor. Iran is the birthplace of Avicenna, and there is a special attitude to medicine here.

- Where is it better to have a baby in Iran or Russia?

- In Iran, only women working in state enterprises and state institutions can count on parental leave. A parental leave lasts a year. As for childbirth, it all depends on the doctor who is monitoring. In cities, preparation courses for childbirth are very popular, at which psychologists and doctors conduct classes with expectant mothers.

- How quickly did you get used to the local climate?

- The climate in Iran varies by region. The first year I lived in the city of Shush (biblical Susa). This is southwestern Iran on the Iraqi border, one of the hottest regions in the world. It was there that I realized the need for all the elements of a women's costume. In Isfahan (central Iran), I ran into a shortage of water. There is very dry air, hot summers and cool winters, and the off-season is very gentle.

- Today, because of the coronavirus, Russians are not recommended to travel to Iran. But when the situation normalizes, what would you advise potential tourists? What surprises should you prepare for?

- Iran is a country with great tourist potential where you can get acquainted with ancient history, admire medieval architecture, go on desert safari, ski down the mountain slopes and explore the beauty of the underwater world. Summer is the best time to travel to Iran, but for a Russian tourist it is important to know some features.

Only cash should be taken with you, as due to sanctions Iran has been disconnected from the international SWIFT system.

To feel the color, it is better to choose traditional Iranian hotels, learn some common phrases in Farsi. Do not worry about the visa history, since after visiting Iran, there are no marks in the passport.

Particular attention should be paid to Iranian cuisine: kebabs and kebabs (a symbol of Iranian cuisine), mountain sabsi, nut sauces - this is the shortest list of dishes that you need to try in Iranian restaurants.

A separate issue is the Internet and mobile communications. The country has a limit on instant messengers. 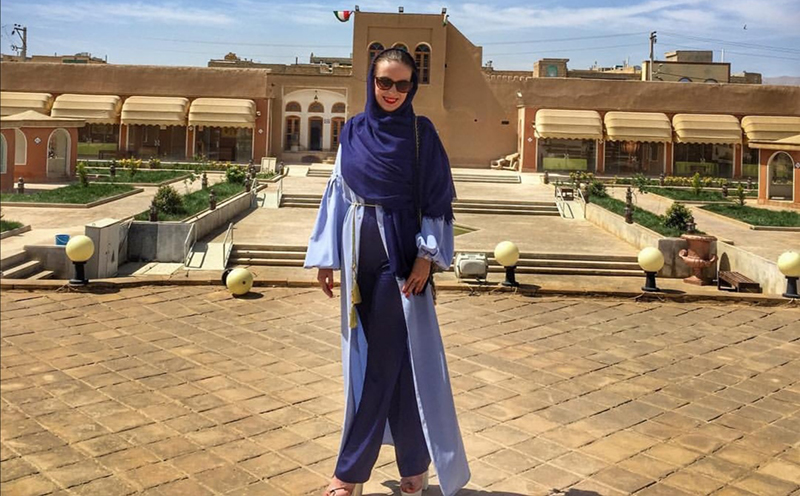 - What stereotype about Iran would you like to dispel?

- Many stereotypes have nothing to do with the real situation in the country.

Firstly, there is an opinion that there is a war in Iran. However, in reality, there has been a peaceful sky over the country for more than 30 years.

Secondly, they talk about terrorism. But the territory of troubled Iran is limited to two provinces of Sistan and Balochistan, which are located on the border with Pakistan.

Thirdly, polygamy. In modern Iran, the vast majority of families consist of husband and wife, and harem stories are from ancient times.

In the world ranking of security, Iran occupies 77th place in the world, and the unique combination of architecture, natural beauties and rich culture make it a truly unique place. 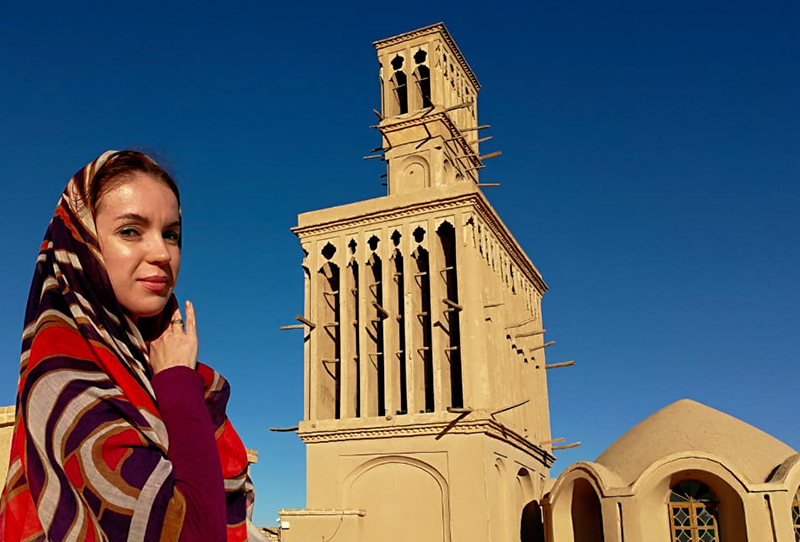