Psychologist Elmira Mirzoeva: "For thirty years we have lived with the stigma of the losing side, now we're the winners"

The war in Karabakh is over, but the wounds of this war will take decades to heal. The memories of their fathers who fell in battles for their homeland are too fresh in the memory of Azerbaijani children. (During the autumn escalation in Karabakh, 2,783 servicemen were killed). It is impossible to return their fathers to their children; you can only drown out their pain of loss by providing moral support. This mission fell on the shoulders of psychologists working in the frontline zone with families whose relatives suffered in this war. About how the war changed the consciousness of millions of Azerbaijanis, Vestnik Kavkaza was told by the chief psychologist of the Center for psychological assistance and speech development "Logos", President of the Association of Practical Psychologists of Azerbaijan, Ph.D. Elmira Mirzoeva, who in different years was the coordinator of projects implemented by UNICEF, the International Committee of the Red Cross, the Heydar Aliyev Foundation.

- Sure. For thirty years we have lived with the stigma of the losing side, now we are the winners. And the winners have a completely different psychological state: a different mood, different emotions, different perspectives. The sons of those who died in the first war went to the front, not thinking for a second that they could say goodbye to life. The war has changed not only young Azerbaijani men who have acquired colossal life experience, hardened in battles for their homeland, it has changed all of us. We have become even more united, which means even stronger.

- In which regions of Azerbaijan did you work?

- I have already made two trips: the first lasted from November 9 to 16, the second - from November 23 to 29. I managed to work with the families of martyrs and wounded in the cities of Tartar, Agjabedi, Agdam, Barda, Goranboy. I was talking to a girl whose mother died in front of her in the rocket bombardment of Barda. She helped pull the wounded out from under the rubble until another explosion thundered, as a result of which she herself suffered. The girl took her mother to the hospital and begged the doctors to save her life. Then one elderly doctor knelt in front of her and said: "You yourself work in the hospital, you save people's lives. I must understand that there is no longer any help for your mother." It turns out that as a result of the bombing, the girl's mother was mortally wounded. From the front it looked like a small hole on the chest, but from the back, on the back, it looked like a huge hole.

- Which of the family members affected by the war, in your experience, most needs psychological help?

- Of course, children. One girl I worked with sleeps with a photograph of her father. The other two constantly ask their mother when their father will return from the war, although they heard that he became a martyr. Sometimes children do not understand the meaning of the word "martyr". It seems to them that soon everything will be over, and the father will return. You've probably watched the video where children at the funeral ceremony scream, begging not to throw dirt on their father. They do not understand that the father is being buried. Of course, this picture is not for the child's psyche. Adults should understand this and prevent children from participating in the funeral. This does not mean that they need to lie. This means that the truth must be conveyed to them in the form in which they are able to perceive it. 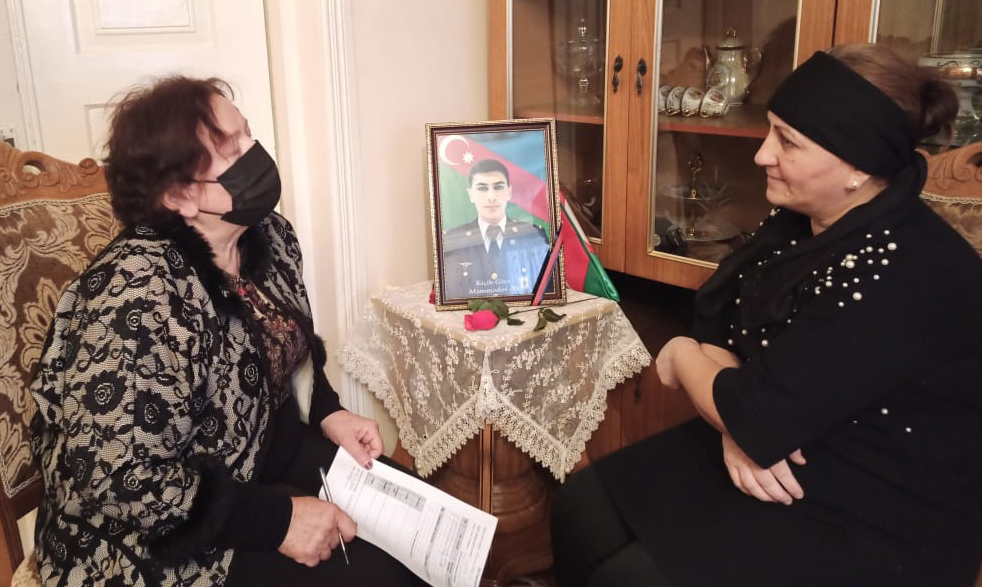 - How to explain to a child that his father is no longer here?

- The work of a psychologist is necessary, taking into account the fact that each child is unique. An individual approach is important in our work. However, at a certain stage of the work, work in a group is most effective, because the child sooner or later gets tired of communicating with a psychologist tete-a-tete. He gets bored. Then play therapy in a group comes to the rescue.

- How can the loss of a father affect the psyche of a child?

- For a child, this is a colossal stress, as a result of which he may become depressed, start stuttering. Each case is unique. However, it is important to know: the sooner the psychologist starts working with the child, the better. Fresh wounds are much easier to heal.

- We talked in some detail about what kind of psychological assistance should be provided to the children of those killed in the war. And what about their mothers, widows of martyrs? What do these women need most?

- In moral support. In order to be listened to and supported. It is important to realize that they are not alone. Azerbaijani women are by nature such that they are ready to sacrifice themselves to their families. Sometimes they cannot even speak up, on the contrary, they keep everything to themselves, become isolated, live alone with their grief. With a psychologist, they are more frank, they can unload emotionally, reveal their secrets, talk heart to heart, find answers to questions that have long tormented them. Now these women need a psychologist more as a good conversationalist. Later it will be necessary to start psychotherapy. It is very important to work in stages, slowly. Then the help given to them will give much more effective results.

When I talk to mothers who lost their sons in the war, I always say: "Your pain is also my pain, and the pain of all Azerbaijani mothers. Your son gave his life for the territorial integrity of his Motherland. Such feats are not forgotten overnight." And believe me, these are not just words for me, I am the mother of three sons who volunteered for the war. If I could go to war myself, I would gladly do it. Helping people who lost their loved ones in the war makes me feel a little happier.