Vladimir Sungorkin: "There will be an economic boom after the pandemic"

A year has passed since our planet was put on a protective mask against Covid-19. In March last year, WHO declared a pandemic, and the President of Russia introduced quarantine. The consequences of the pandemic have become dire both for the world and for our country. According to official data, more than 92 thousand Russians died from covid-19, while in total 4 million 390 thousand people passed through this disease in the country. The pandemic has hit the economy as well. But even from unhappiness, a person must learn lessons that are useful for himself. The pandemic took a lot from us, but gave something, taught something, how, for example, to more competently resist future threats. Oleg Kusov, a columnist for Vestnik Kavkaza, spoke about the reverse side of the "coronavirus medal" with Vladimir Sungorkin, CEO and editor-in-chief of the publishing house "Komsomolskaya Pravda".

- Vladimir Nikolaevich, coronavirus is a terrible disease, but it's not in vain that the wise Russian people say that there is a silver lining. The pandemic has brought many disadvantages to our lives, but are there any advantages?

- Of course, from the point of view of positive sides, it was not customary to look at the past year, but now it needs to be done, because it is not known what other disasters and misfortunes will send us. And looking back, we see that it is necessary to extract the positive from any situation. This is exactly what happened with the Komsomolskaya Pravda holding. Even before Covid-19, I told my fellow journalists not to hang around in vain at work, not come here unnecessarily. Journalism does not need a person to sit at a desk in an office all day. I am sure that this applies to many professions, since sitting in the office is far from the most productive occupation. A friend came into your office to talk, to discuss something, first he greeted, then said goodbye - in such flickering a working day passes, and you do not have time to concentrate on work. Experience shows that people in fashionable large editorial spaces in which they supposedly work hard, often become neurotic, since they have to work and be distracted by what is happening around them.

And then came the quarantine, about which the authorities warned our holding, by the way, in advance, about a month in advance, so that we were ready to work from home. For us, such a decision was psychologically not entirely clear. But it quickly became clear that labor efficiency had not declined. Moreover, people began to work more productively and interestingly. I myself went to my country house, in which I worked the same way as here, if not even more, since I was not distracted by frequent calls, a huge number of pointless activities, etc. An interesting fact: every day at 11 o'clock we hold a planning meeting in "Komsomolskaya Pravda", only now we don't all go to the same room, but discuss Zoom topics. In the hall, we used to gather 20 people from different districts of Moscow, people took an hour and a half to get there. And now we have fun and easy videoconferencing with our branches across the country. Previously, they were torn away from us, but now they receive instant information and participate in discussions. 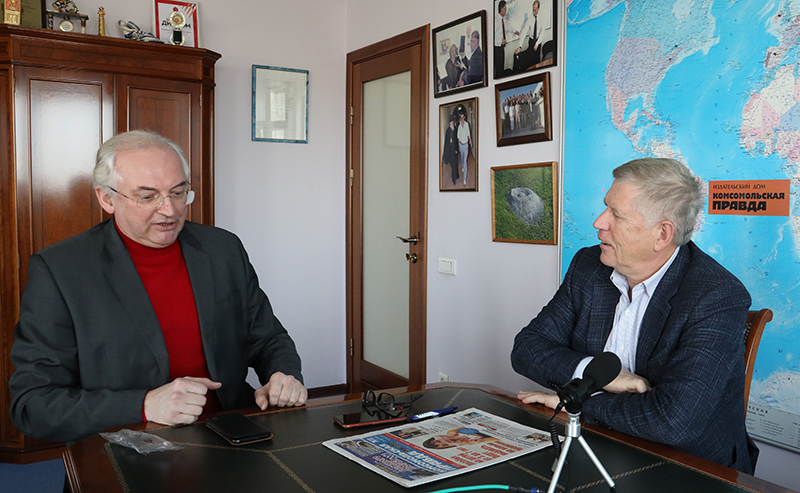 Quarantine and many restrictions have long been canceled, but if you walk through our corridors and look into our offices, you will see one, rarely two people in them, and many offices will be closed altogether. Moreover, we will soon be moving to new premises. And we agreed to rent an area there that is two times smaller than here. That is, as a result of the appearance of this damn virus, which greatly ruined our lives, we have achieved a positive result: we reduced the office space, saved our colleagues from traveling through exhausting Moscow traffic jams, and established a closer connection with the regions of the country. We save money, but not at the expense of work. We are creating the new office with the expectation not of personal workplaces of journalists, but with the expectation of their communication, conversations with leaders and meetings with characters and experts. Such a scheme is not to the detriment of our leading position in the extraction and processing of information for the population of the country.

- Komsomolskaya Pravda employs not only young, but also famous experienced journalists - let's say about their age. Obviously, the distance was conducive to their bolder communication with high technology?

- Even those who looked at smartphones and Zoom with superstitious horror have already learned how to press all the buttons necessary for operation. We employ both young people and people of middle and old age. They have all mastered high technologies.

- Has the pandemic changed your colleagues? Still, a difficult year, accompanied by an increased level of negativity. It seems to me that people have become subject to depression.

- I think most of my colleagues were not depressed. A quarter of our team was ill, and in the regions, some branches were ill with almost the entire team.

On the contrary, there was optimism, although we were cutting their salaries - all high-paid executives, including me, were cut by 20%. Only this month the salary was restored to the previous level. And the emotional upsurge among journalists was the result of the growing public interest in information. The traffic to our site has increased, the audience of our radio has increased. In difficult times, people have a growing demand for information.

- In one of your radio programs, you predicted good economic growth in Russia next fall. After all, you are a manager - the head of a large information holding, so your words have inspired me personally.

- This is pure arithmetic. Firstly, people have a great deferred demand, they haven’t gone on vacation for a year and a half, but the stash remained. This is a serious factor for the economy - pulling money out of the box. Second, the rise in consumption will push the entire economy. We already see that oil has risen to almost $ 70. This means that they began to consume more of it. The revival began. Thirdly, people are vaccinated and this process is only accelerating - they receive protection from Covid-19. All this suggests that by the summer it will be much better ... There will be a general recovery, similar to what was in Europe and America after the Second World War. People missed a normal life very much.