Authorities in the Turkish resort city of Marmaris are evacuating local residents and tourists from hotels in connection with a wildfire, the broadcaster NTV reported on Thursday.

The broadcaster's footage shows the forest burning in the immediate vicinity of residential buildings and hotels. People are being evacuated as a precaution, as the direction of the wind inspires hope that the fire will not reach the buildings. Many witnesses have also uploaded videos, allegedly depicting the wildfire coming close to hotels and houses.

Turkey's southern Mediterranean coast is known for its scorching summer heat, which often causes wildfires. Officials have said the latest fires are the biggest to date.

Agriculture Minister Bekir Pakdemirli said an 82-year-old man had been found dead during the evacuation of Kepezbeleni, 16 km northeast of Manavgat, and two people were found dead in Degirmenli, 20 km east of Manavgat.

Pakdemirli said there had been 41 wildfires in 13 of Turkey's 81 provinces since Tuesday, of which 31 were under control. Blazes in Osmaniye and Kayseri were still burning.

The forest fires have erupted over the last few days in the southern provinces of Mersin, Osmaniye, Adana, Antalya, Kahramanmaras.

The blazes also burst out in the southwestern province of Mugla and central provinces of Kirikkale and Kayseri.

The county's efforts to bring 10 ongoing fires under control are continuing as 1,832 personnel, three planes, 29 helicopters, and 458 water tenders are joining the mission. 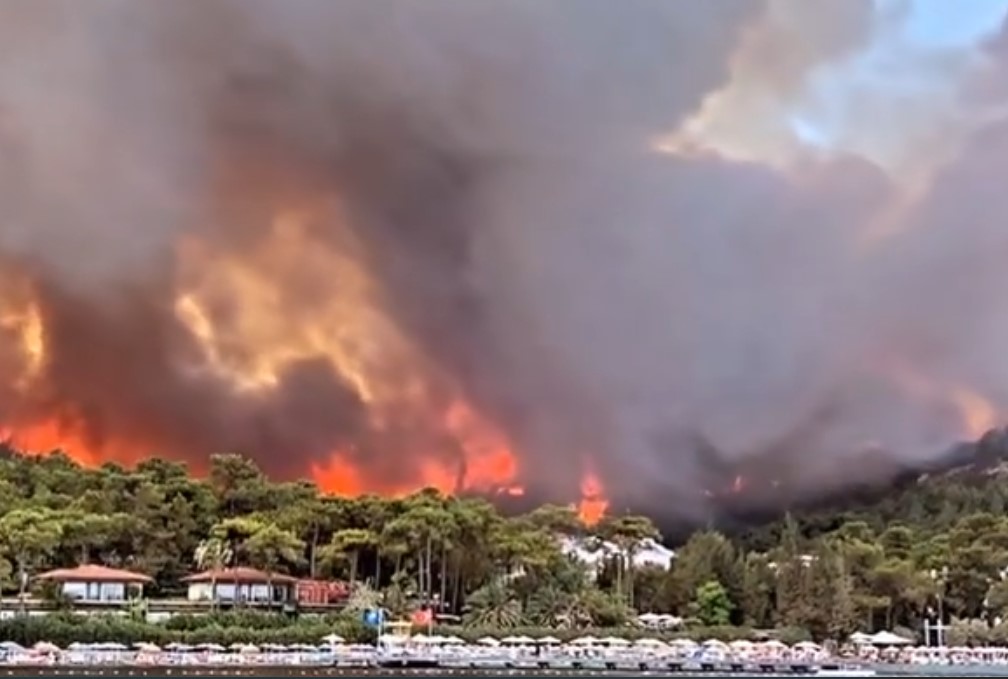 Forest fires first erupted on Wednesday in Antalya’s Manavgat district and spread over a large area.

"Three of our citizens lost their lives and 122 others were affected from fires while treatment of 58 citizens continues," AFAD said on Manavgat fires.

With the latest announcement, the number of people who died during fires in Antalya has risen to four, Anadolu Agency reported.

Along with Antalya, Adana, and Mersin, firefighters are working selflessly to bring fires under control in other provinces.

In Mersin, people living in areas near fires were evacuated on Wednesday.

Authorities said that the powerful wind fanned fires to rage through the region and it hampers efforts to put out the blazes.